Java thread synchronization and concurrency are the most discussed topics during various design phases of a complex application. There are many aspects of threads, synchronization techniques to achieve great concurrency in an application. The evolution of CPUs over the years (multi-core processors, registers, cache memory, and the main memory (RAM) has lead to some areas that usually developers tend to overlook — like thread context, context-switching, variable visibility, JVM memory model vs CPU memory model.

Let's have a quick recap on some thread-related terminologies and concepts before we delve deep into this topic of threads and synchronization further.

In order to mitigate such conditions, we can set a priority for a thread, using the Thread.setPriority(int priority) method. The priority parameter has to be within a set range between Thread.MIN_PRIORITY to Thread.MAX_PRIORITY. Check the official Thread documentation for more information on thread priority.

You may also like: Java Thread Tutorial: Creating Threads and Multithreading in Java

There are two ways by which we can execute a thread in Java. They are:

This is a fundamental interface used to execute a particular task by a thread. This interface describes only one method, called run() with a void return type. Implement this interface if any functionality has to be executed in a thread but there is no return type expected. Basically, the result of the thread or any exception or error cannot be retrieved in cases of failure.

This is an interface used to execute a particular task by a thread in addition to get a result of execution. This interface follows generics. It describes only one method, called call(), with a return type described, per the class that implements this interface. Implement this interface if any functionality has to be executed in a thread and the result of the execution has to be captured.

This helps the application to achieve higher concurrency when threads are attempting to read or write to a resource. This implementation is called ReentrantReadWriteLock. The major differences between the two classes are shown below:

See the ReentrantReadWriteLock example below to see how to achieve concurrent reads on a resource while allowing only one thread to update a resource.

Note: a resource can be any data that various threads in an application try to access concurrently.

Create one instance of the above class and pass it to multiple threads; the following will be handled:

A note on the Java and CPU memory models will help us better understand how objects and variables are stored in the Java Heap/Thread-stack vs the actual CPU memory. A modern-day CPU consists of Registers, which act as the direct memory of the processor itself, Cache Memory — every processor has a cache layer to store data, and finally the RAM or main memory, where application data is present. 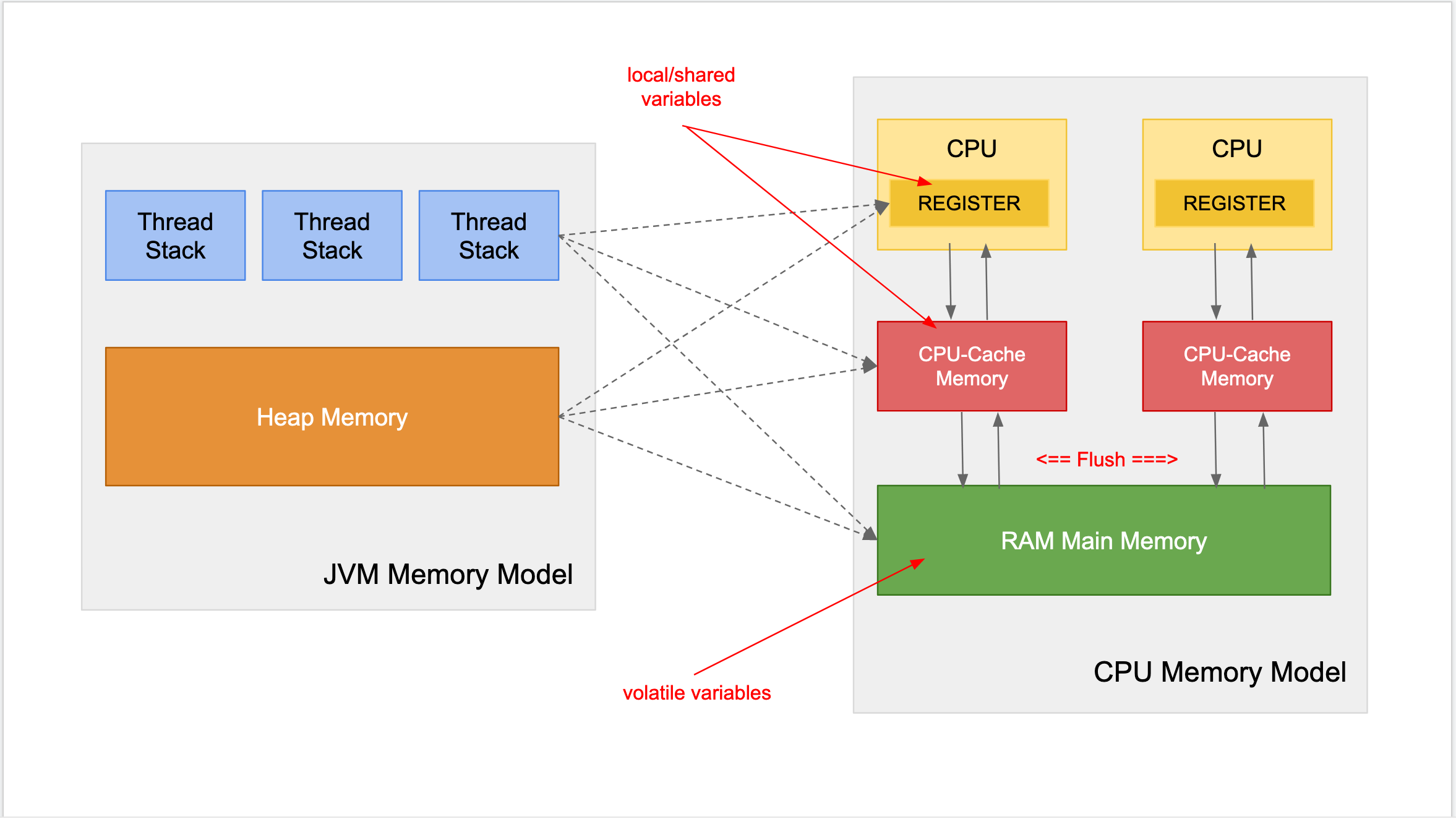 There is a very good article on volatile keyword in DZone. Please refer this link to gain better understanding on this concept and best use of it.

A final topic in thread synchronization is after Lock is the Java class, ThreadLocal. This class enables the creation of variables that can only be read/written by the same thread. This gives us a simple way to achieve thread safety by defining a thread local variable. ThreadLocal has significant usage in thread pools or the ExecutorService, so that each thread uses its own instance of some resource or object.

For example, for every thread, a separate database connection is required, or a separate counter is required. In such cases, ThreadLocal helps. This is also used in Spring Boot applications, where the user context is set for every incoming call (Spring Security), and the user context will be shared across the flow of the thread through various instances. Use ThreadLocal for the following cases:

That's it on thread synchronization and associated concepts. Concurrency will be covered in the part 2 of this article.