Alibaba Cloud Table Store is a distributed NoSQL database developed by Alibaba Cloud. Table Store uses a multi-model design, including the same Wide Column model as BigTable and Time series model for message data. In terms of storage model, data size, and write and query capabilities, it can meet the needs of time-series data scenarios. However, as a general-purpose model database, the time series data storage should fully utilize the capabilities of the underlying database. In the schema design and computational docking, there must be a special design, such as OpenTSDB's RowKey design for HBase and UID encoding.

What Is Time Series Data?

The reason why both types of data are classified into time series is that these types are completely consistent in data model definition, data collection, data storage, and computing, and the same database and the same technical architecture can be abstracted. 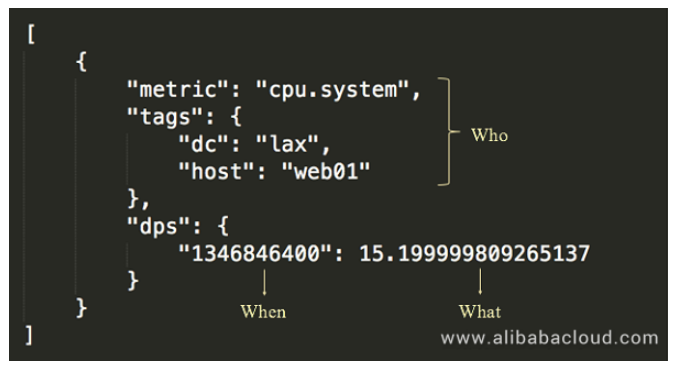 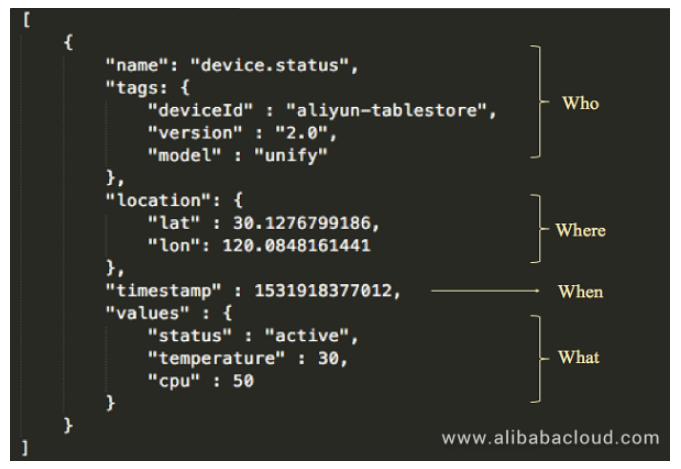 This is a more complete time series data model, and has two main differences with the model definition of the monitoring time series data of OpenTSDB: first, there is one more dimension, location, in metadata; second, it can express more values.

Time series data has its own query and computing methods, which roughly include:

According to the data model definition, name + tags + location can be used to locate an individual, which has a time series, and the points on the time series are timestamps and values. For the query of time series data, first the time series needs to be located, which is a process of retrieval based on a combination of one or more values of the metadata. You can also drill down based on the association of metadata.

Analysis is to extract more value from the time series data. There is a special research field called "time series analysis". 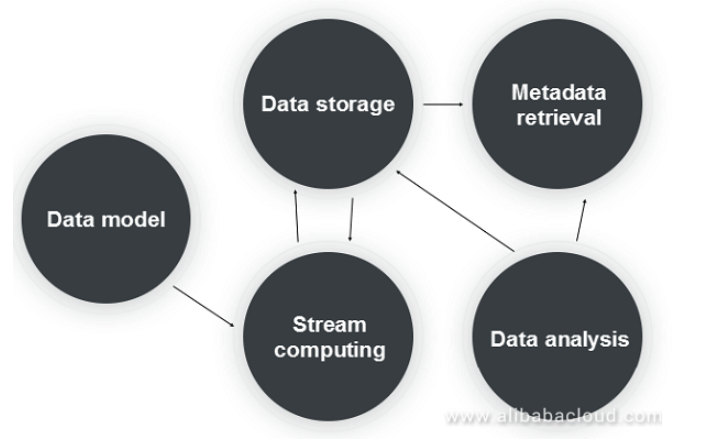 The core procedure of time series data processing is as shown above, including:

Let us see the products that can be used in product selection in these core processes.

Time series data is typical non-relational data. It is characterized by high concurrency, high throughput, large data volume, and high write and low read. The query mode is usually range query. For these data characteristics, it is very suitable to use a database such as NoSQL. Several popular open source time series databases use NoSQL database as the data storage layer, such as OpenTSDB based on HBase, and KairosDB based on Cassandra. Therefore, for the product selection of "data storage", an open source distributed NoSQL database such as HBase or Cassandra, or a cloud service such as Alibaba Cloud's Table Store can be selected.

For stream computing, open source products such as JStrom, Spark Streaming, and Flink, or Alibaba's Blink and cloud product StreamCompute on the cloud can be used.

Metadata for the time series will also be large in magnitude, so a distributed database is first considered. In addition, because the query mode needs to support retrieval, the database needs to support interted index and spatial index, and open source Elasticsearch or Solr can be used.

Separation of Storage and Computing

Table Store implements separation of storage and computing in both technical architecture and product form, and can freely allocate storage and computing resources at a relatively low cost. This is especially important in the time series data scenario, where computing is a relatively constant, and the storage grows linearly. The primary way to optimize costs is to allocate constant computing resources and infinitely scalable storage, without the extra computing cost.

A notable feature of time series data is that there is distinctive hot and cold data access, and recently written data is accessed more frequently. Based on this feature, the hot data adopts storage medium with a higher IOPS, which greatly improves the overall query efficiency. Table Store provides two types of instances: high-performance instances and cost-effective instances, corresponding to SSD and SATA storage media respectively. The service feature allows users to freely allocate tables with different specifications according to data of different precisions and different performance requirements for query and analysis. For example, for high-concurrency and low-latency queries, high-performance instances are allocated; for cold data storage and low-frequency queries, cost-effective instances are allocated. For interactive data analysis that requires high speed, high-performance instances can be allocated. For scenarios of time series data analysis and offline computing, cost-effective instances can be allocated.

The bulk of the storage is for cold data. For this part of less-frequently accessed data, we will further reduce the storage cost through Erasing Coding and the ultimate compression algorithm.

Table Store is deeply integrated with Blink and is now available as a Blink maintenance table and a result table. The source table has been developed and is ready for release. Table Store can be used as the source and back-end of Blink, and the entire data stream can form a closed loop, which can bring more flexible computing configuration. The original data will subject to a data cleansing and pre-aggregation after entering the Blink and then is written to the hot data table. This data can automatically flow into Blink for post-aggregation, and historical data backtracking for a certain period of time is supported. The results of post-aggregation can be written to the cold storage.

In addition to integrating with Blink, Table Store can also integrate with Function Compute for event programming, and can enable real-time abnormal status monitoring in time series scenarios. It can also read incremental data through the Stream APIs for custom analysis.

Table Store deeply integrates with distributed computing engines developed by Alibaba Cloud, such as MaxCompute (formerly ODPS). MaxCompute can directly read the data on the Table Store for analysis, eliminating the ETL process for data.

There are some optimizations in the entire analysis process, for example, optimization of queries through the index, and providing more operators for computing pushdown at the bottom.

From the definition we provided above, metadata is mainly divided into Tags and Location. Tags are mainly used for multidimensional retrieval, and Location is mainly for location retrieval. So for the underlying storage, Tags must implement the inverted rank index for providing efficient retrieval, and the Location needs to implement the location index. The order of time series for a service-level monitoring system or tracing system is 10 million to 100 million, or higher. Metadata also needs a distributed retrieval system to provide a high-concurrency low-latency solution, and a preferable implementation in the industry is to use Elasticsearch for the storage and retrieval of metadata.