“Provide a unified interface to a set of interfaces in a subsystem. Facade defines a higher-level interface that makes the subsystem easier to use.”

Consider an order fulfillment process of an e-commerce store. When a user places an order for a product, the following services completes the process:

Our e-commerce store also supports mobile clients. Users can download the client app and place an order from their devices. Legacy desktop clients can also communicate with the store as continuing support for users who wants to place an order over the phone through a customer service assistant. This is how different clients interact with the order fulfillment process of the e-commerce store. 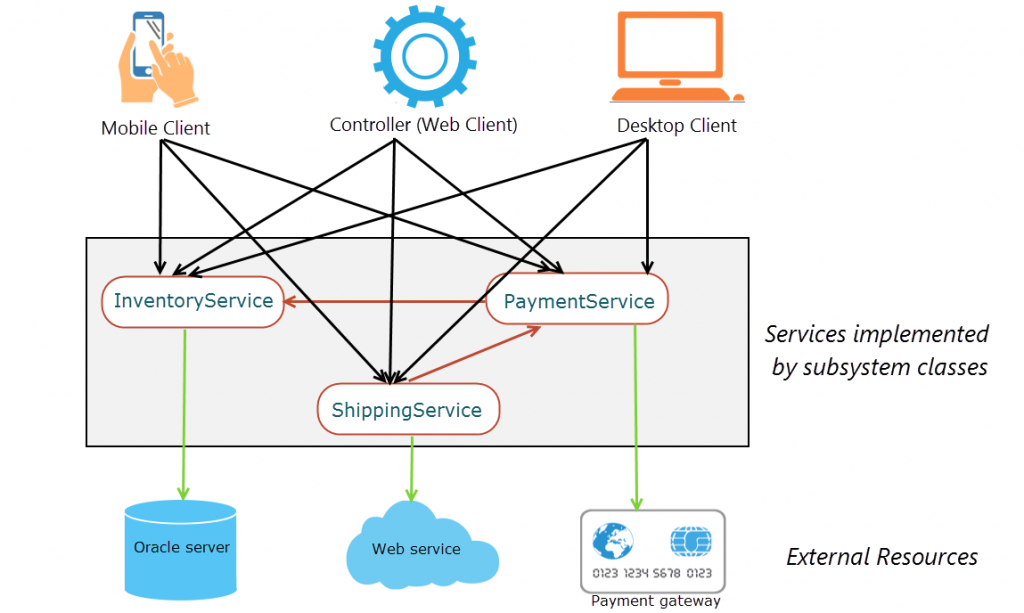 As you can see in the figure above, the clients need to make multiple interactions with the services implemented by subsystem classes, and to do so, the clients need to be aware of the internals of the subsystem classes. It means, our clients are tightly coupled with the subsystem classes – a fundamental violation of the SOLID design principles. Imagine the impact if the underlying data store needs to be changed to a NoSQL database or the current payment gateway is replaced with another one. Things can get more worse if a new InvoicingService is introduced in the service layer or the existing ShippingService is updated to make the logistic part internal to the organization. Due to this tight coupling, any changes in the service layers will propagate to the client layer. This makes changes time consuming and error prone.

With a facade, this is how different clients interact with the order fulfillment process. 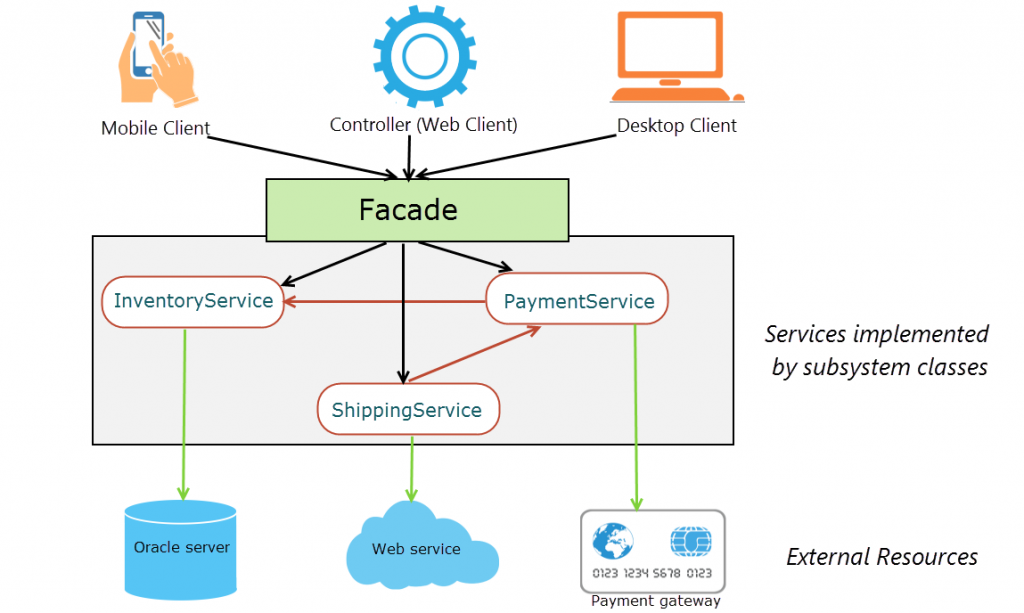 As you can see in the figure above, with the introduction of a facade, clients now interact with the facade for an order fulfillment instead of individual subsystem services. The facade handles the underlying interactions with the subsystem services transparently from the clients.

Accordingly, we can categorize the participants of the Facade pattern as:

To apply the facade pattern to our order fulfillment example, let’s start with the domain class – Product.

I have kept the Product class simple with only two fields, a constructor to initialize them, and the default constructor.

We will next write the subsystem service classes.

For the purpose of the example, I kept the service classes to the bare minimum. This is only for illustrative purposes. A real e-commmerce example would be much more complex.

We can have a concrete facade class without any interface – the pattern does not mandates one. However, we will provide an interface to follow- “Depend upon abstractions. Do not depend upon concretions” which sums up Dependency Inversion principle. By doing so, we can have clients programmed against this interface to interact with the services through the facade. Writing our code to an interface also loosens the coupling between the classes.

We will implement the interface in the OrderServiceFacadeImpl class.

In the facade we implemented the placeOrder() method that consolidates all subsystem interactions. In this method, we called methods on the services to perform the operations of fulfilling an order.

Next we will write the controller class – the client of the facade.

The OrderFulfillmentController client class we wrote is very simple as it should be. The client controller calls the placeOrder() method of the facade and stores the result in a boolean.

Far too often I see junior programmers clutter up controller classes. In a MVC design pattern, a controller has absolutely no business interacting with the database layer directly. It’s too common to see a JDBC datasource being used directly in a controller class. This is a clear violation of the Single Responsibility Principle. Controllers have a single purpose, and that is to respond to the web request. It is not to call on a database, it is not to use Hibernate, it is not to manage database transactions.

Because our controller has only one function in life, it’s easy to test.

The output of the test is this.

It is common for programmers to confuse the Facade pattern with the Adapter pattern. Keep in mind is that Facade in general is about reducing the complexity of interfacing with a subsystem, whereas Adapter is more geared towards tweaking an existing interface to another interface that a client expects to work with.

In Enterprise Applications developed with Spring, a facade is commonly used to consolidate all the business services the application provides to its users. In Spring applications, you will be often developing business and service facades that serves as a gateway to business logic and the service layer of the application. For persistence, you will write DAOs, a type of facade, but specific to the data layer. While, I kept this example intentionally generic, you should be able to see how this would work nicely with Spring in the context of IoC and Dependency Injection.