A sequence or flow of execution in a Java program is called a thread.

Threads are also known as light weight processes, as they share the same data and process address space.

Every thread has a priority based on which it gets preference for execution. Threads can have priorities ranging from [1…10].

Below is a list of some of the constants defined in the Thread class for specifying the thread priority:

Threads with higher priority generally (but this is not guaranteed) execute before threads with lower priority.

Threads can only yield the CPU to other threads having the same priority but if a thread attempts to yield to a lower priority thread the request is ignored.

Threads are of two kinds namely a user thread and a daemon thread.

User Threads — User threads are normal threads and are generally used to run our program code.

Life Cycle of a Thread 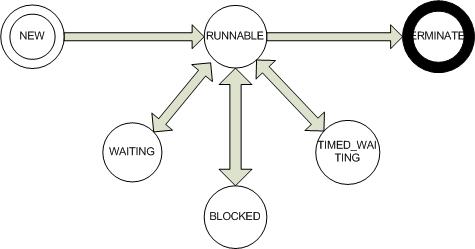 How to Use the Thread  Class in Java?

Below is an example of using the Thread class in Java.

How to Use the Runnable Interface in Java?

Below is an example using the Runnable interface.

How to Use Runnable Interface With Anonymous Class?

We can further simplify the above code snippet by using an anonymous class implementation of Runnable interface.

Please see the code snippet below to understand this.

How to Use Runnable Implementation With Lambda Expression?

With Java 8 or later, Runnable implementation of thread can be further simplified by using lambda expressions for Runnable interface.

See the example below to understand how to implement this.

This is the most preferred approach due to the readability and conciseness of the code.

The use of the Runnable interface is preferred as the first approach requiring extending the Thread class limits the MyThread class to further extend another class due to lack of Multiple Inheritance support in Java.

Published at DZone with permission of Tarun Telang. See the original article here.