As we approach 2023, web development is becoming increasingly complex. New frameworks are continuously emerging, and veteran frameworks are updating to meet new demands. With so many different options available to developers, it can be challenging to determine which framework is suitable for any given project.

In this article, we’ll discuss the top 15 Angular frameworks that continue to dominate and some smaller but promising up-and-comers.

Each of these frameworks has its own advantages and disadvantages; some may be more useful than others, depending on your specific needs and project requirements.

However, the choices you make now will have a lasting impact on your future projects and career trajectory as a software engineer. This is where it becomes crucial for you to pick the right Angular framework.

Check out some of the most popular angular frameworks for web app development: 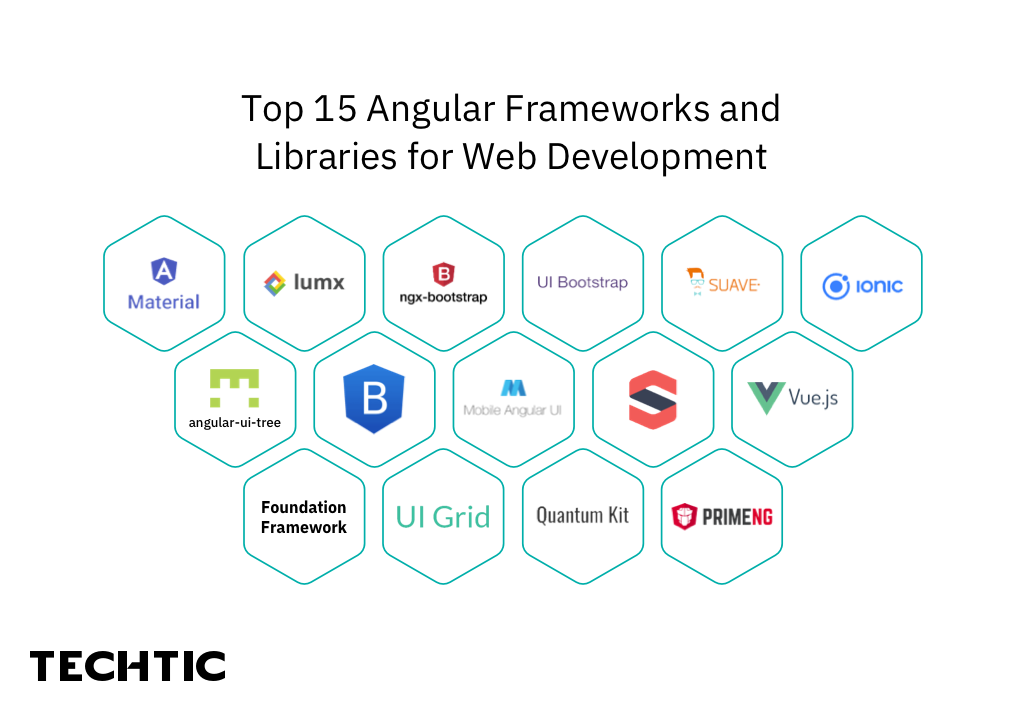 Angular Material, a CSS Framework endorsed by the Angular team, is one of the best Angular UI Frameworks. It is a UI component library with high-quality, reusable templates, admin panels, and components.

Since Angular Material offers a rich CSS library with typography and similar components, it is very popular among developers across the globe.

With Angular Material, web developers can create attractive, engaging, fast, and responsive websites by ensuring that they follow contemporary design practices and principles such as device independence, browser portability, and graceful degradation.

LumX is an Angular framework for front-end development that uses Google Material Design techniques to create visually appealing and user-friendly interfaces. This SaaS framework can be considered the best CSS framework for Angular. It can be used to customize the design of your web app.

Furthermore, it optimizes your JS files and SaaS with Gulp, thereby improving the performance of the app. jQuery can also be used with LumX without the need for any plugin.

NGX-Bootstrap is an open-source library for Angular that offers many useful features, such as buttons, alerts, pagination, tabs, progress bars, popovers, and more. These components make your web design job easier. They also help you customize the process to your needs.

Moreover, modal dialogs, dropdown menus, and tooltips, for example, are included in this library. These elements are suitable for keyboard, touchscreen, and mouse users.

Developers can select their preferred option when they build a web application. Although they don’t have to use individual JS components as drag-and-drop functionality, CSS and HTML components from Bootstrap can be used to create web applications. NGX-Bootstrap is continually being improved, and a new version is always available.

On the brighter side, this framework is created on pure AngularJS directives based on CSS and Bootstrap HTML elements, so it does not require jQuery and can be used to integrate Bootstrap components in an Angular job.

Suave UI helps developers create web UI interfaces on Angular. The most awesome thing about Suave UI is its wide range of directives, CSS definitions (like grids, layered elements, and colored buttons), and services, which allow developers to experiment with a variety of UI components.

It also stores UI components in bundle files, eliminating the need to include them individually. Developers don’t have to include these bundled component libraries separately, as they are already included. Hence, they can accomplish the task with just one browser command.

Ionic is one of the most well-known Angular frameworks that run on multiple platforms. Because it is open-source, Ionic is a hybrid mobile application development framework that uses web technologies like CSS, HTML5, and SASS.

Consequently, Ionic offers a front-end SDK based on Cordova and AngularJS that enables the production of hybrid mobile apps that work across several platforms, including iOS and Android.

This framework enables AngularJS to be used without jQuery in addition to the native AngularJS functionality. The plugin lets you choose only the functionalities you need to minimize the time and effort required to build your website.

Customizing your website’s appearance with this library’s predefined components is a breeze as it allows you to convert the CSS files to use Angular UI Gird’s pre-configured components. With this framework, you can make your applications more appealing, which will help you better target users’ wants and make more visitors return.

Angular UI Tree is a popular Angular UI framework among developers used for sorting nested lists. Angular UI Tree does not require jQuery, making it simple for you to alter the items of a tree. In addition, angular UI Tree utilizes AngularJS’s native scope and prevents child nodes in components to ensure that data bindings work properly.

Although this framework solely is not adequate enough to build the entire front end of your web application, you can couple this with other Angular frameworks to speed up your web app UI development.

A JS library fronted by Angular, Radian is a straightforward, open-source library that enables developers to make embedded plots in HTML documents.

With Radian, developers don’t have to create JavaScript; instead, they can use HTML to represent plots. In addition, Radian plays a crucial role in binding the JavaScript variables and HTML elements. This JS library is primarily used for platforms that deal in Bayesian statistics.

Radian offers technologies that enable two-way data binding between HTML components and JavaScript variables in addition to D3.js for the graphic generation that allows the creation of SVG components. In addition, these components may be embedded directly on the page, which enables them to be accessed from any browser.

Another crucial component of Radian is that it offers comprehensive documentation backed with a liberal license that makes getting started with this particular Angular widget framework a breeze.

Lastly, this open-source library is versatile, and you can use it to accomplish different tasks related to web development projects.

While composing these applications, you can store your files in the cloud using the Angular file uploader for Image and File. This makes it easy for developers to access the files whenever they want to retrieve these uploaded files for the development phase.

You can also use this library to create navigation bars that display the header, footer, or menu bars. To speed up the process, a scrollable header and a footer are positioned for the footer and header.

Also, before you upload your pictures, you may resize them to fit the frame of your applications.

Supersonic, an agnostic AngularJS UI framework that includes JavaScript, web-based components, and CSS, can be used with any popular framework. It is termed an agnostic framework.

It simplifies HTML apps and is cohesive with AngularJS. Supersonic works with AppGyver. However, to be clear, most of the APIs will not operate on a mobile website or vanilla Cordova app.

With Supersonic, developers can transcribe HTML and CSS components, or they can utilize components that map HTML to native APIs and native interference with ease.

With over 60 AngularJS-based front-end development components, Quantum UI streamlines the web development process by providing rest-service and server-friendly UI elements. It is built on an MVVM architecture and has a Bootstrap-compatible CSS structure included.

This Angular testing framework is maintained and hosted by GitHub. You don’t have to write JavaScript for Quantum UI; you can configure it using just properties and attributes. The majority of its elements are free and open-source, whereas others must be paid for.

Angular is one of the most popular front-end frameworks. It is a modified and updated foundation that relies on CSS elements and foundation markup to create directives.

The greatest advantage of using this framework is that it allows for the creation of more semantically enriched websites. Examples include interchange, dropdown, alert, accordion, process bar, and trigger.

Creating the front end of complex apps using this game-changing JavaScript Angular framework’s declarative UI style is a breeze. With more than 70 UI components to choose from, PrimeNG provides you with everything you need. Likewise, angular has everything you need, from native themes to pre-built widgets, if you’re working on an Angular project.

With regards to front-end development, PrimeNG is one of the best frameworks out there. It allows you to include many front-end features in your web application, such as charts, form inputs, overlays, menus, and more. In addition, its MIT license allows you to use the MIT open-source widgets for free and open-source.

Vue.JS is an open-source Angular framework that allows users to build web app UIs and single-page applications. Routing, state management, and build tooling functionalities are all part of Vue.JS’s most highlighted feature list. Its features also include an adaptable architecture for declarative rendering and component composition.

Vue has become broadly utilized in many sectors since its initial release in February 2014. Its prior versions have been upgraded, and the app is used to develop numerous web applications. Using this framework is simple, and you can customize it to suit your web development project.

Which Angular Frameworks Should You Use?

The Angular UI frameworks discussed in this article are our favorite dynamic web app development frameworks because of their flexibility and features. As each Angular framework has its own advantages and disadvantages, you should pick one or more according to your project and web app UI needs.

Published at DZone with permission of Nisarg Mehta. See the original article here.