Like many others, we’re using Jenkins at my organization for tasks like testing or deploying some of our projects. Recently, I had to figure out a way to have a different Node.js version on a Jenkins project bound to a branch I was working on.

Jenkins is a self-contained, open source automation server which can be used to automate all sorts of tasks related to building, testing, and delivering or deploying software. - Jenkins Docs

So I had a branch I was working on and needed a different Node.js version for that, mostly for trying out things, without risking having to change any other Jenkins project configuration.

Specifically, I had a branch with some tests based on Jest and Puppeteer that rely on async/await which is available from Node.js 7.6. Whilst the Node.js version installed on the Jenkins machine was lower than that, I needed a newer Node.js for my Jenkins project that my branch was bound to.

The solution I found was to install the Jenkins NodeJS Plugin, which already had some of the features and functionalities I was looking for. 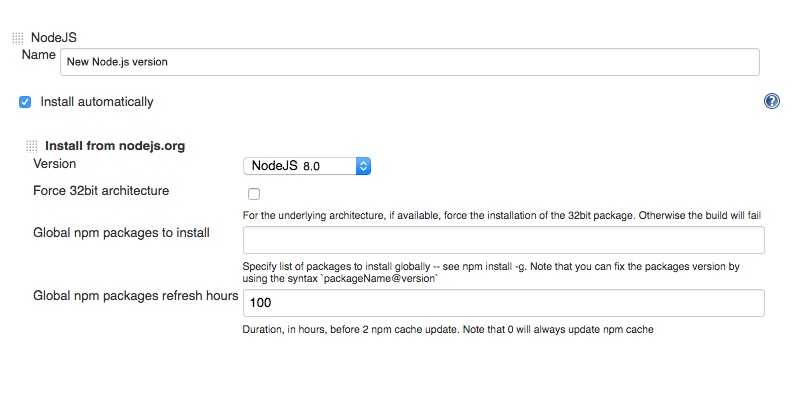 The Jenkins project with a given Node.js 8.0 version.

So, what Jenkins NodeJS Plugin does is:

That’s pretty much it, hope you find this useful!