Typically in low-latency development, a trade-off must be made between minimizing latency and avoiding excessive CPU utilization. This article explores how Chronicle’s Pausers — an open-source product — can be used to automatically apply a back-off strategy when there is no data to be processed, providing balance between resource usage and responsive, low-latency, low-jitter applications.

Description of the Problem

In a typical application stack, multiple threads are used for servicing events, processing data, pipelining, and so on. An important design consideration is how threads become aware that there is work to do, with some general approaches including:

The Problems with Sleeping, and How to Sleep Soundly

The actual behavior when a thread requests a sleep varies not only across platforms, but also across different versions and usage patterns for the same platform.

For example, POSIX requires that sleep calls always yield the CPU, whereas Linux allows sleep implementations (including sleep, usleep, nanosleep, and similar) to busy wait in some cases. For older versions of Linux with fixed timer ticks (usually 100Hz, 250Hz, or 1000Hz), there was a relatively large penalty when yielding to the scheduler, which encouraged the use of busy waiting internally within sleep calls for short periods. By contrast, more recent versions of Linux have more sophisticated schedulers using dynamic ticks, which enable more accurate short-period interactions with a sleeping thread, which largely removes the need for busy waiting to achieve low sleep periods.

The following rules of thumb generally apply across recent Linux versions for standard processes (i.e., those running with normal permissions under the standard scheduler):

While the above suggests that even relatively short sleeps of ~1us could potentially provide a useful compromise between latency and resource use, the major issue is scheduling — as soon as the sleeping process is fully context switched off a core, the overhead to reschedule can be orders of magnitude higher than the intended sleep period.

Here again, there is no single answer as to how the system will behave. The key is to bias the situation as much as possible to avoid the thread being switched from a core, and the use of thread affinity (to avoid the thread being moved to another core) and CPU isolation (to avoid another process/thread contending with the thread) can be very effective in this case. (Other options include running with real-time priorities; however, we want to keep the focus of this document on standard setups as much as possible.)

Careful use of affinity, isolation, and short sleep periods can result in responsive, low-jitter environments, which use considerably fewer CPU resources compared with busy waiting.

Chronicle’s Pausers — an open-source product — provide a sliding scale of behaviors between the above extremes of signal/notification, fixed sleep, and busy waiting by using an intelligent back-off strategy which enables a more nuanced control to better balance low latency and resource utilization.

The general strategy is to busy-wait for a short period before incrementally backing off to longer and longer pauses (consuming decreasing amounts of CPU) when there is no work to be done. Different strategies (Pauser Modes) are available depending on the task, with the canonical way of using a Pauser being:

This table illustrates several different Pauser modes, as well as the benefits and downsides to using each of them. Chronicle Pausers allow for optimizing the CPU load for a given level of responsiveness and latency. This trade-off can be configured with high accuracy, without needing to make significant changes to your application code. For instance, if you realize that a particular thread needs to be more responsive, you can change its Pauser from a back-off Pauser to a busy Pauser and vice versa.

Of note, the Busy Pauser used for lowest latency internally uses busy waiting, and as such will consume 100% of one core. It is therefore important to ensure Busy Pausers do not contend for the same core, and CPU affinity and isolation should be considered when using Busy Pausers to control this aspect. More information about CPU isolation and its benefits in event loops can be found here.

The graph below plots the time waiting for an event (x-axis) against the pause/response time for a selection of Pausers.

The Busy, TimedBusy, Yielding, and Millis Pausers show flat response times regardless of how long the thread waits to receive an event, but with varying response times due to the different yielding strategies vs CPU usage. In many cases, TimedBusy in particular provides an excellent compromise between low latency and CPU usage.

The Sleepy and Balanced strategies show step changes and steady growth in response times reflecting the incremental back-off the longer the thread waits to receive an event. 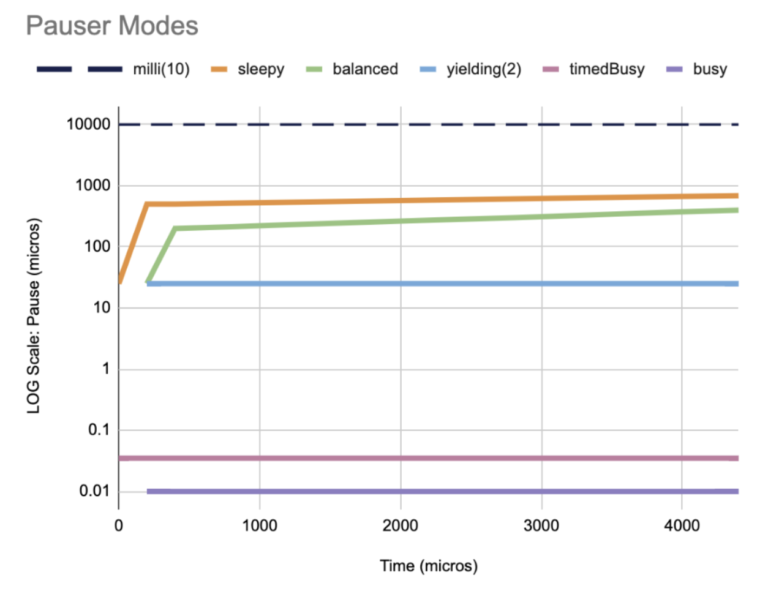 This article explored the use of Chronicle’s Pausers and how they are used to build responsive, low-latency, low-jitter applications with relatively low CPU utilization. This in turn helps maximize hardware utilization while also reducing power consumption, helping reduce costs to your organization.