In Unix/Linux operating systems, processes can be in one of the following states:

Let’s discuss these states in this article. 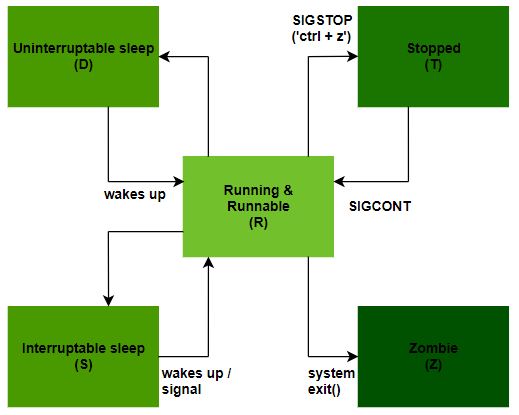 When the CPU executes a process, it will be in a RUNNING state. When the process is not waiting for any resource and ready to be executed by the CPU, it will be in the RUNNABLE state.

The Sleeping state indicates the process is currently waiting on certain resources (like waiting on I/O, waiting on locks, application code making the process to sleep, etc.). There are two types of Sleeping processes:

How to Kill the Sleeping Process?

How to Kill the ZOMBIE Process?

Issuing ‘kill -9’ on a ZOMBIE process ID will not affect it because the ZOMBIE process doesn’t exist. However, ZOMBIE Process can be killed by sending a SIGCHLD signal to the parent process, using the below kill command:

This signal tells the parent process to execute the wait() system call and clean up its ZOMBIE process.

How to Find the Process State

You can find the process state from the following source:

a. The Unix/Linux command-line tool, ‘top,’ will report the process state in the column, ‘s’. Process status is reported with a single character:

b. You can use web-based root cause analysis tools, which will report the process states.