How to Understand 'Load Average?'

In most cases, 'Load Average' is reported as an average of 1 minute, 5 minutes, and 15 minutes. Please refer to the below screenshot:

In the above example, we saw a 1-minute load average of '6.00.' Suppose the above system has just 1 CPU, then it indicates 'Load Average' is quite high on this machine. It means this system is processing 600% load at the last minute. We derive 600% because:

Thus, the system is 500% overloaded more than the capacity it can handle.

Say suppose the above system has 12 CPUs, which means ‘Load Average’ is normal. Since the 1-minute 'Load Average' is '6.00,' it means only 50% of the compute capacity is utilized. We derive 50% because

In this scenario, we can fairly conclude that this system is underutilized.

'Load Average' intervals help determine whether the system’s demand for computing is increasing over the period or decreasing over time.

What is a Good or Bad 'Load Average?'

Load average is fairly a relative term. What might be a good 'Load Average' for one application can be a bad load average for another application. If you ask me what a rule of thumb is, I would say if the 'Load Average' percentage goes beyond 80%, you might want to investigate it.

How to Find 'Load Average?'

'Load Average' can be found from various sources:

a. Unix/Linux command-line tool 'top' reports 'Load Average' in the field as highlighted in the below image: 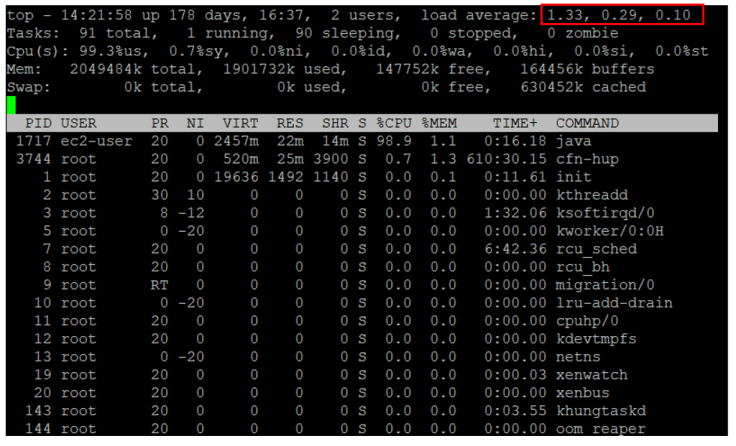 b. Unix/Linux command-line tool 'uptime’ reports ‘Load Average’ in the field as highlighted in the below image:

c. 'Load Average' is also printed in the '/proc/loadavg' file:

'Load Average' is a good metric that has been in existence since the early 1970s. It gives a high-level pulse of the system. There should be good reasons why this metric has survived for more than a half-century. But if you want to do a detailed root cause analysis where performance degradation is happening, 'Load Average' wouldn’t be sufficient enough. You want to use other tools like top, vmstat, iostat, yCrash,…

We would also like to conclude this article in the same way Genius Greg Brandon concluded his 'Load Average' blog with the quote from a comment in the Linux source code  kernel/sched/loadavg.c  written by scheduler maintainer Peter Zijlstra: