A loosely coupled architecture is a software application development model wherein multiple components are connected with one another but are not heavily dependent on each other. Together, these components create a general network or system, despite each service being an independent entity created to perform a single task.

Example of a Loosely Coupled Architecture 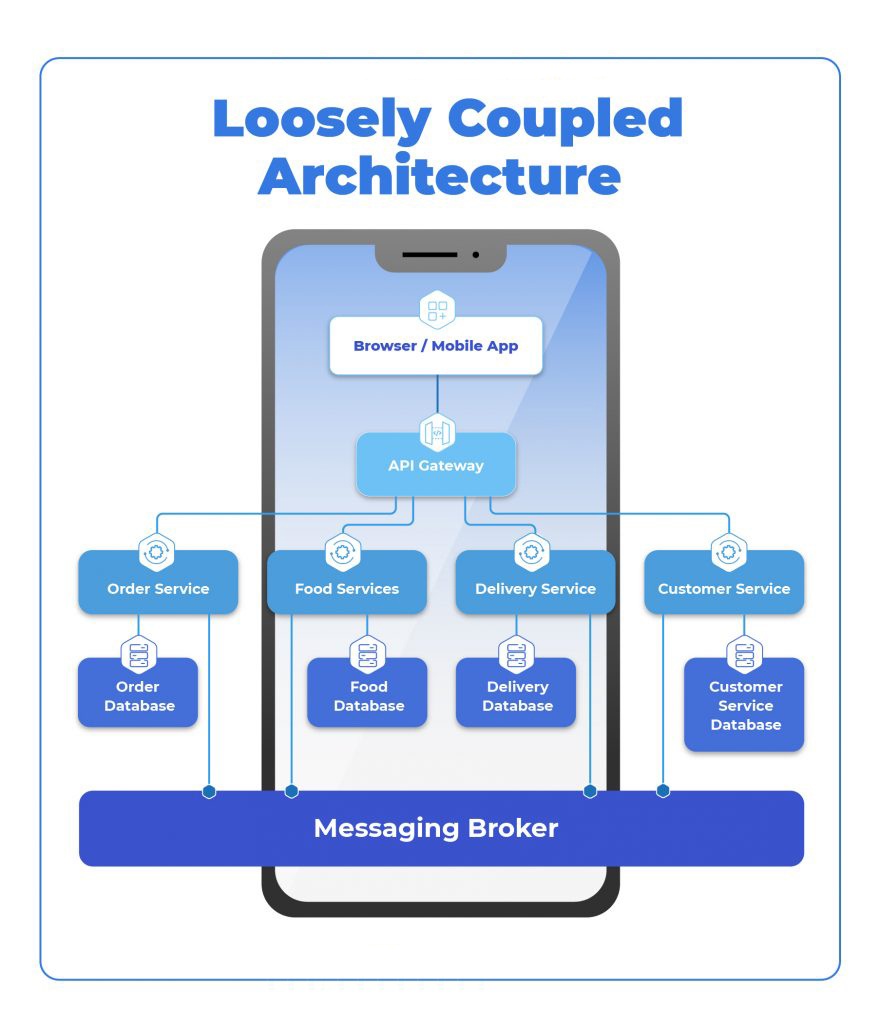 Above is an example of a food ordering app that uses a loosely coupled system. The app contains different services such as order service, restaurant service, delivery service, and customer service. When a customer orders a food item, the order service takes care of processing it. The restaurant service receives this data and prepares the food while the delivery service handles the delivery part. Customer service assists customers when need be. In this case, each individual service is not heavily dependent on any of the other services. All services communicate via APIs in order to send and receive the required information. Therefore, when one service crashes, it can be instantly replaced without disturbing the other components of the app. Similarly, the order service can be automatically scaled during peak hours or seasons.

Each service in a loosely coupled system is designed with a single purpose or responsibility and can be independently deployed, managed, scaled, and removed. Each service contains an interface (REST API) for communication. Seeing as each service can use a different programming language, platform, technology, and framework, it’s easy to make changes to individual services, perform tests, scale services and remove them without affecting the system. The loosely coupled architecture accommodates extensive APIs and interoperable resource schemas decoupled from the interface.

On the other hand, objects in a tightly coupled architecture heavily depend on the other components of the system. Each object must collaborate and coordinate with other objects or components in order to complete a function. In this case, the logic of one class is called by another. This means one object or class requires another object or class to complete a task. Therefore, each class takes on multiple responsibilities, a change made to one class also forces a change in one or more other classes. 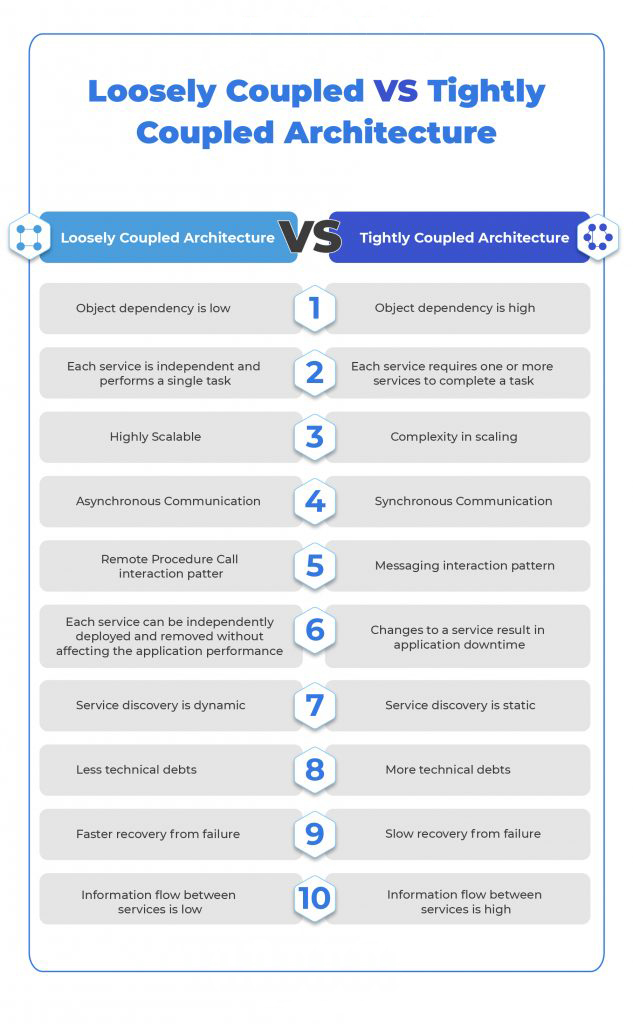 The Importance of Microservices in a Loosely Coupled Architecture

Microservices is an architectural design that facilitates the development of an application as small and independent services that run their own processes and communicate using lightweight protocols and messaging systems, making them platform-agnostic and language-agnostic. Each service is independent, testable, highly maintainable, independently deployable, and implements a business capability. Most importantly, each service is maintained, deployed, created, and owned by a small team. Microservices is a notable variant of a service-oriented architecture that leverages the loosely coupled architecture approach. In fact, loose coupling is the key component of microservices architecture.

Microservices architecture is highly important to create a loosely coupled system, as the coupling is inevitable in a software system design. For instance, in an e-commerce portal, the order service should communicate with the customer service or delivery service using APIs. That said, microservices allow you to keep this coupling as minimal as possible.

Each coupling method brings its own challenges to the table. For instance, runtime coupling reduces availability when a change occurs. As such, you’ll experience a long queue of calls in a microservices architecture.

When you implement design-time coupling, a small change in an API requires all the services that interact with that API to be changed. Therefore, all of the teams involved with those services must collaborate and discuss the change. As such, it’s important to keep design-time coupling as loose as possible, especially when different collaborating teams are involved.

Which AWS Services Can Be Used for Loosely Coupled Architectures?

Amazon Simple Queuing Service (SQS) and Simple Notification Service (SNS) are powerful mechanisms that can help you build highly scalable and loosely coupled architectures, with coupling at the platform, network, and operation levels. 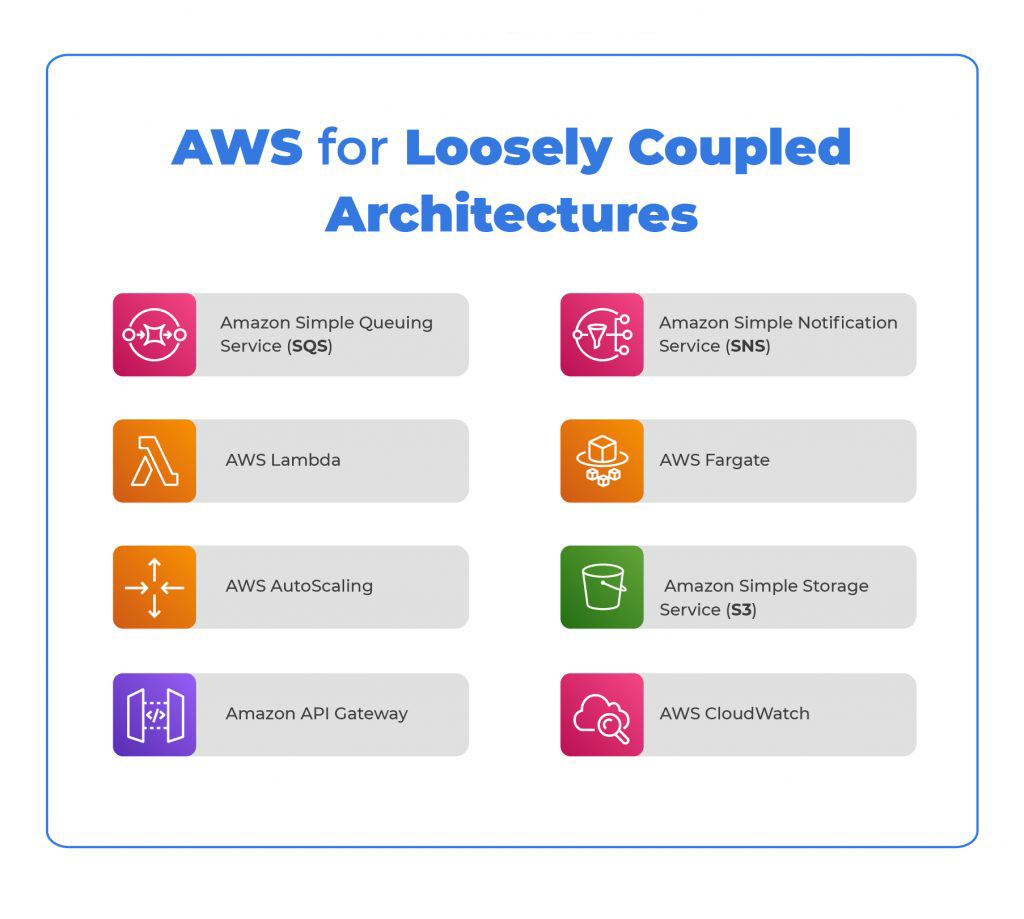 Unlike tightly coupled architecture which runs thousands of parallel processes or cores that are dependent on one another to perform a calculation, loosely coupled architecture runs smaller jobs in large numbers on a single node with parallelization occurring within the node. As processes are not highly dependent on each other, losing one node doesn’t affect overall functionality. The job is either processed later or deleted.

It’s important to consider the following aspects when choosing a loosely coupled architecture.

Serverless computing is a cloud-native software development approach that helps organizations easily and seamlessly build and run applications without the burdens of provisioning and managing servers. Servers are still used but are managed by the cloud vendor. The catch here is that the charge is not based on the number of servers or the bandwidth but rather on usage. It enables organizations to purchase back-end servers on a pay-as-you-go basis and only pay for the services used.

1. Function as a Service: A service that allows you to run code based on events without the complexities of infrastructure management. Applications run in a stateless mode wherein the server and client are loosely coupled and hence are independent, flexible, scalable, and fault-tolerant.

2. Backend-as-a-Service: The task of running the server-side logic is outsourced to a cloud vendor. AWS BaaS tools include Amazon Elasticsearch Service for logging, AWS Kinesis for analytics, and AWS Cognito for IAM.

There are three types of serverless invocation methods:

When it comes to serverless computing, loosely coupled architecture with an asynchronous method is a good choice. That said, don’t forget to ensure it is fail-fast and fans out properly.