With the advancement in technology, testing solutions have become more scalable than ever, as organizations moved to Selenium test automation from manual testing. But, one area that most organizations are still struggling with is the scalability to run multiple tests in parallel. Many corporations are still using sequential testing methods to deliver quality assurance, which consumes a lot of time, resources, and efforts.

Some are either reluctant towards the implementation of parallel testing while others are probably not doing it because their web-application is small enough to be managed by the current release windows. Keep in mind though, every release is bound to expand the web-application, and somewhere down the road, you are going to hit a hard brick wall if you don’t adopt for parallel testing. Not to forget, the primary reason for the existence of the Selenium Grid is to allow testers to run test cases in parallel. If you want to know what is Selenium, you can refer to this article on the topic.

What Is Parallel Testing In Selenium Automation?

Parallel testing is a process where you run the same tests simultaneously in different environments. The primary purpose of executing tests in parallel is to reduce the overall time and efforts of testing while ensuring a quality product by using a Selenium Grid.

Say, you want to test the functionality of a signup form, you’ve written then automation test script for the form. If you wanted to perform this test over 60 different Browser and OS combinations and let’s say your single test runs in 2 minutes, you’d take a total of 120 minutes i.e. 2 hours. And this is only the sign-up form, what happens if you were to run automation scripts over other modules such as pricing page, demo scheduling form, contact form, and more! Even if you automate your Selenium test suites, if you run them one after the other, it is going to take forever for your tests to complete.

Now, what would happen if you were to run 3 parallel tests simultaneously, in the above scenario?

You’re right! The total execution time would have trimmed down from 120 minutes to just 40 minutes. Similarly, if you had 4 parallel tests running, the total time would have chopped down to 30 minutes only and so on. 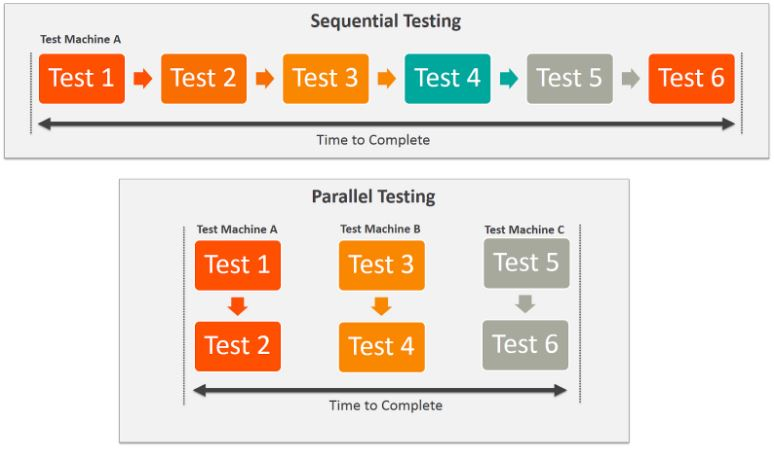 Why Run Selenium Tests In Parallel?

There are various reasons that make it crucial for testers to adopt parallel testing as their first testing approach. Some of the most popular reasons are:

Executing tests in parallel is a faster approach than sequential testing, as it provides testers with wider test compatibility in less span. For example, if you want to test the user interface functionality of a new web application, then you don’t have to run tests again and again for different OS and browser combinations, you can test all the combinations at the same time by running tests in parallel.

Sequential testing does provide comprehensive and thorough testing of an application, but it is very time-consuming. On the other hand, parallel testing can reduce the overall testing time by running tests on multiple machines in parallel. For example, if you want to run 100 concurrent tests, then you can reduce the testing time by a factor of 100, which in turn helps you deliver the product more quickly.

Sequential testing requires developing, maintaining, and keeping the test environment up-to-date, which can affect your overall budget. But parallel testing is an automated process that runs on the cloud, so there is no need for maintenance. Moreover, you don’t have to worry about the updates, as the cloud infrastructure is always updated.

For continuous integration and continuous delivery, you need to run functional tests frequently and quickly. And if you run tests in parallel, it will not only buy you more time but also allows you to have detailed reports of test data. Development teams can later use these reports to find issues in the code and fix them quickly in order to optimize CI/CD.

A great way to release high-quality products in the shortest time possible is using continuous integration and delivery methodology. Implementation of  Continuous testing requires a faster test cycle, which is not feasible with sequential testing.   However, if you use parallel testing that allows you to leverage the cloud and virtualization to perform more tests at a faster speed, then you can release products more quickly to the market.

When Should You Execute Parallel Testing In Selenium?

Now, you know how parallel testing is helpful for continuous integration and delivery of applications, it’s time to understand when and how you should implement it in your SDLC. You can use parallel testing for the following scenarios:

How To Approach Parallel Test Cases In Selenium?

We believe the best approach to execute tests in parallel is to create different projects for browser compatibility testing various parts of a web application, and a master project to test those different projects. Generally, there are two-level criteria for parallel testing. The first one is Entry-level criteria and the other one is Exit criteria.

In entry-level criteria, specific tasks are defined that should be satisfied before executing tests in parallel successfully, such as :

What Are The Best Practices for Parallel Test Execution in Selenium?

Running automated tests in parallel is not that easy, even with Selenium Grid, and it happens due to the unstructured automation framework that you use for parallel test execution. Here are some best practices that can help you execute tests in parallel successfully.

If you generate independent tests that can run on their own, then it will be easier for you to execute them in parallel. In simple words, the tests need to be self-contained. So, when you run any test, you don’t have to worry about the order in which you run your test suite.

Sometimes, tests in parallel execution exhibit invalid behavior like failing when it shouldn’t or failing when it shouldn’t, which is known as flakiness. Independent tests can reduce the flakiness in the testing process by decreasing the number of possible breaking points in a test. Another significant advantage of using independent tests is that if one fails, it won’t stop you from testing other testing functionality.

Perform Automated browser testing on your local Selenium Grid can be exhausting, as not only you have to manage and maintain all the machines, but also to set them as well.  Parallel testing on a local Selenium grid will have some scalability issues as you won't be able to cover all the major browsers, their different versions, and OS.

With a cloud-based Selenium Grid, you don’t have to worry about setup anymore. With a Cloud Selenium Grid, you can run parallel tests on several browsers and their different versions. You’d not only save a lot of money on setting up the infrastructure but also you’d get ample time to do tasks that matter.

Most testers have to run their tests in a particular order due to hard code embedded directly in the source code. This approach doesn’t allow you to run tests in parallel efficiently, as it creates dependencies between test cases.

So, avoid hard code values in your test scripts to ensure that each of the tests is independent and can be executed whenever necessary. You can even opt for a data-driven approach in the testing framework to configure the test cases.

Many testers often find it challenging to execute tests in parallel due to dependencies between various test cases. When tests are dependent on each other, they need to be run in a particular order, which often affects the parallel testing strategy. So, you should focus on creating independent and atomic tests that can be executed independently.

You Need to Manage Your Test Data Efficiently

The primary key to successful parallel test execution is handling the test data efficiently. But to achieve this, you need an effective strategy that can create test data when required, as well as clean it up when necessary. Below are some basic data management strategies that can be very effective.

These are just a few approaches that can be used to manage test data effectively. You can even combine two approaches in order to attain the desired output.

Create Tests That Can Run in Parallel Effectively

If you are planning to adopt parallel testing, you certainly don’t want to disappoint yourself by creating multiple tests that cannot run in parallel just before the release of your product. So, develop your automated test cases with parallelization in mind from the beginning.

Planning from the beginning will not only save you from last-minute disasters, but it will also help test your application efficiently across all combinations. We know it sounds complicated, but writing test cases to run in parallel are easier, petite, and quicker.

Parallel testing is an excellent approach for delivering web applications quickly without compromising with the quality, especially when it comes to automated browser testing. By executing tests in parallel, you can save on QA expenses, run test cases with high accuracy, optimize the continuous integration/delivery processes, as well as improve test scripts continuously. But, implementing parallelization requires an efficient strategy in place from the beginning. In this article, we discussed the different scenarios of parallelization, and how adopting it for your business can be beneficial for you.

Hope you liked the article, let us know what you think about the article in the comment section down below. Also, feel free to retweet the article and share it with your friends looking to know more about Parallel testing.  That’s all for now. Happy Testing!!