Functional testing verifies that features work according to requirements, whereas nonfunctional testing performs checks on wider quality concerns. In this post, I am going to make that difference crystal clear, and give examples and strategies.

The Main Difference Between Functional and Nonfunctional Testing

So, the testing of functional requirements is the verification that the software is executing actions as it should, while nonfunctional testing helps verify that customer expectations are being met. To help make the difference even more clear, I am going to detail some side-by-side examples of each: 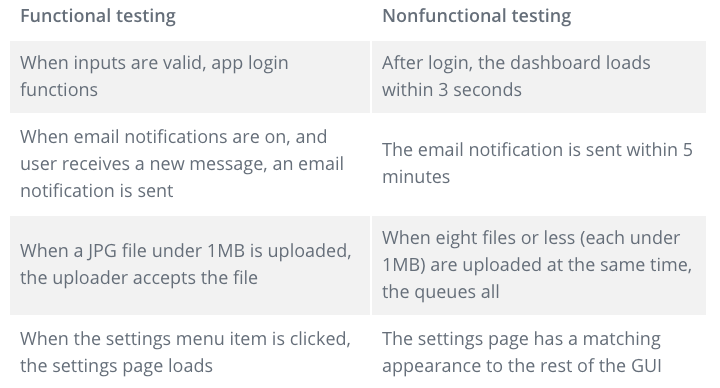 The most common functional testing strategies are black box testing methods-wherein the tester does not need to review the internal source code, but validates functionality by testing various input combinations.

Here are some of the common functional testing techniques:

Nonfunctional testing can sometimes require more creativity and technical expertise because you are testing what the customer expects for an overall quality experience-not X input leads to Y output.

These are the chief nonfunctional testing techniques:

While some nonfunctional testing techniques can have pass/fail criterion (such as volume testing), others can be more objective and based on the opinion of the tester (such as usability testing). However, nonfunctional tests should be written to be measurable and quantifiable wherever possible. Listening to customer feedback is essential for updating nonfunctional requirements. While a business might identify certain scalability and security factors during requirements gathering, customer feedback can expand the set of checks to include better testing of how an app recovers after a crash or how an app performs with minimal storage space left on a device.

Ultimately, knowing the difference between these two types of tests can help during test planning, so that you are clear on what is being covered and why.

"What's the Difference Between Functional and Nonfunctional Testing?" first appeared on Testlio.