A couple of weeks ago I almost accidentally found in my apartment an old laptop that was only gathering dust: a Lenovo Thinkpad T440s that I bought in 2014. 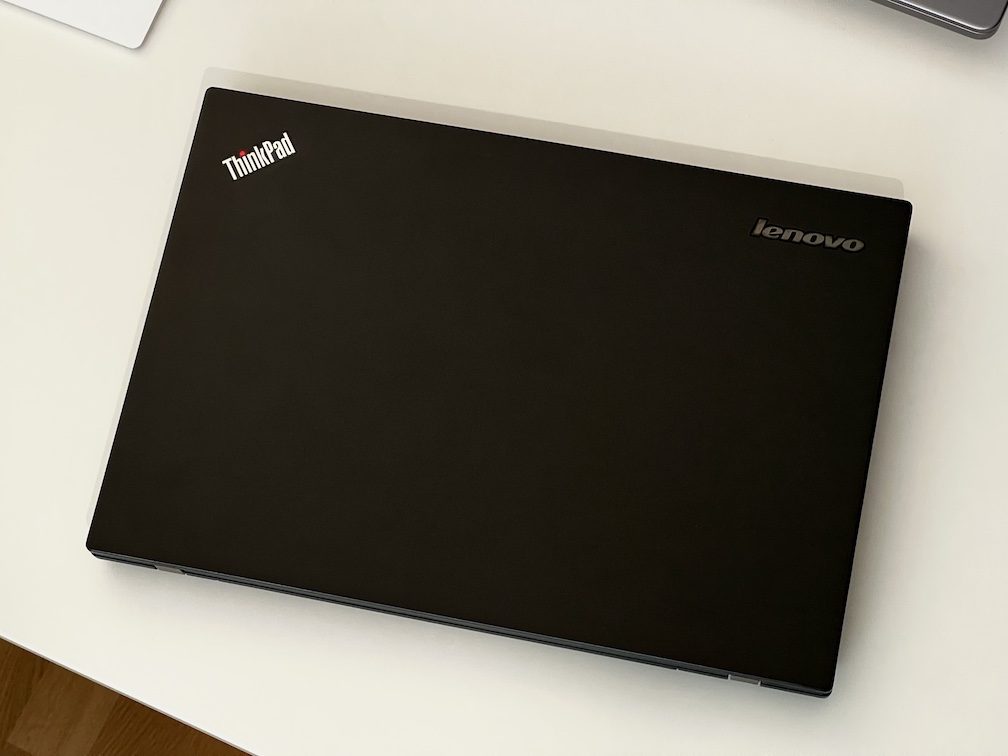 It looked like a good candidate for an always-available server; a machine that I could connect to at any time and install any kind of server software that I could need when developing apps. In times of Docker containers, configuring a machine to run server software is extremely easy. In this article, I’ll show you how to take advantage of that old laptop by installing Ubuntu Server, Docker, and a MariaDB database with all the configurations needed to have it always available, always on.

Is it worth having an old machine running something like a database server? The answer as always is: it depends. More specifically, it depends on the usage you intend to give to it. There are obvious things for which you cannot repurpose an old laptop. For example, if you want to use it as a storage device for large files or run big data applications or experiments, you might want to use cloud storage, a cloud database, or get a proper device that fits your requirements.

But in general, I think repurposing an old computer is worth it. Especially for things such as experiments or development/test environments, modest hardware is often more than enough. Moreover, you already have the machine! So why not take advantage of it?

Before you start, make sure that you have a backup of any important files that you want to keep. Look for documents, photos, videos, all that kind of stuff. Spend an hour or so just looking for valuable content in the hard drive. Better to be safe than sorry! Use an external drive or a cloud provider like Google Drive or Dropbox to move the files. Or if they are already configured, move the files from the old laptop to a newer one using your local network.

Depending on the usage that you plan to give the laptop, you might want to encrypt its content or safely erase sensitive data using software like File Shredder, Eraser, or CCleaner.

You have many options. Here are just a few:

Make sure to use one that fits your requirements. For example, check that the software you want to install later in the server is compatible with the operating system.

I went for Ubuntu Server, which in my opinion is probably the easiest to install and use. I won’t go through the details on how to install it. You can find plenty of online resources that explain how to do this in detail. In short, you’ll need a USB flash drive, download the Ubuntu Server ISO image, and use a program like Etcher or Rufus to create a bootable USB drive. You then connect this USB drive to the laptop and boot from it. On my Thinkpad, I had to press the F11 key when the laptop was starting to enter the boot menu and select the USB drive. From there, is as easy as following the steps.

Also, make sure to install an SSH server (Ubuntu Server includes this by default).

When configuring the network connection, set a static IP so you can connect to the server from other machines (for example, your software development machine). In Ubuntu Server, you can do this after the installation process by modifying the /etc/netplan/00-installer-config-wifi.yaml file as follows:

Use your Wi-fi connection name, password, and gateway. In the example above, I assigned the static IP address 192.168.1.200. You can reload the configuration using:

Disabling Sleeping When the Lid Is Closed

You probably want your server to keep running even when the lid is closed. To disable Ubuntu Server to sleep or go to suspended mode edit the /etc/systemd/logind.conf as follows.

Make sure the following lines are not commented out and that their values are as indicated:

Done! Close the lid and place your server wherever you want in your house. For mine, I just placed it in a corner of my office: 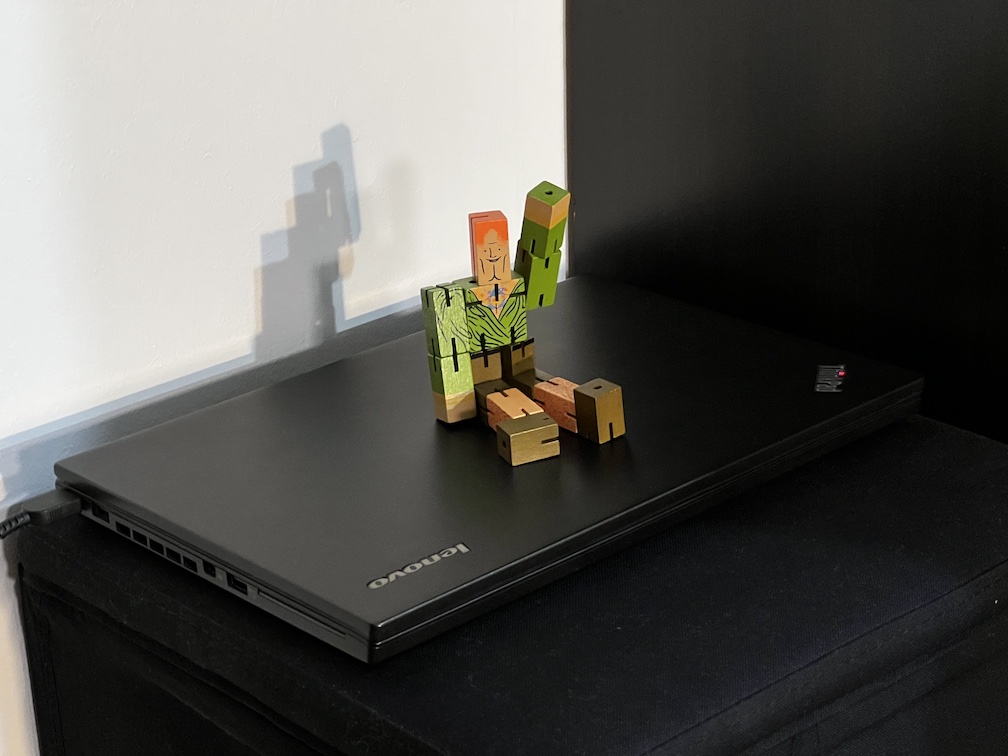 Connecting to the Server Through SSH

Now you can move to your development machine and SSH to the server using something like:

Of course, specify the user you created when you instilled Ubuntu Server instead of my name.

Even though you can use the IP address to connect to the server, you can configure a hostname in your development machine that maps to the server’s IP address. Just a add an entry in the /etc/hosts file on Linux-like machines or c:\Windows\System32\drivers\etc\hosts on Windows:

Specify the IP address of your server and use any hostname you want. It’s a good practice to append .local at the end to remember that the hostname is local to your network and that it’s not visible from the outside world. On macOS, you’ll have to add the IPv6 address as well if you want to avoid long DNS lookups that slow down the connection process. For example:

Now you can connect to the server using something like:

Notice that if you want to use the hostname to connect to the server from additional machines, you’ll have to configure this in all of them.

Docker is a virtualization tool that allows you to create isolated environments for your applications. Unlike virtual machines (hypervisors), containers run on top of the operating system without virtualizing the hardware.

If you prefer to have virtual machines instead of containers, a good option is Vagrant. Vagrant allows you to automate the creation and provisioning of virtual machines via VirtualBox or other hypervisors (called providers in Vagrant terminology). I think having virtual machines running on your old laptop is overkill. Running containers provides good isolation, and from a developer’s perspective, they look as if they were virtual machines. For that reason, I suggest using Docker instead.

You could also install any server software (like a database) on bare metal, directly on top of Ubuntu Server; however, using containers gives you the flexibility to experiment with different options without having to uninstall and reinstall the software. You simply run the containers that you want to use and stop or delete them without messing with your base operating system. Moreover, there are many ready-to-use Docker images (an image is like a template to create containers) for all kinds of interesting applications. This simplifies the process of installing databases, web servers, and other tools.

To install Docker, connect to your new server using SSH as described above and run the following command:

Confirm that the Docker daemon is running:

You should see active (running) displayed under Active.

If you Google the name of a database plus "docker image,” you’ll find what you need to install that database using Docker. In this article, I’ll show how to install MariaDB Community Server, an advanced open-source SQL database server. Note that if you have a MariaDB subscription, you can install MariaDB Enterprise Server, an enhanced, hardened, and secured build of the MariaDB Community Server.

This runs the MariaDB server in a container with the name mariadb. The container starts automatically if you restart the machine unless you manually stop the container as follows:

Confirm that the container is running by checking that its status is Up:

Copy the IPv4 address of the container from the output of:

Use that IP address to connect to the MariaDB server from the server (where Docker is running). For example:

Now end the SSH session to disconnect from the server:

From your development machine, connect to the MariaDB database using the hostname (or IP address if you didn’t configure a hostname). For example: 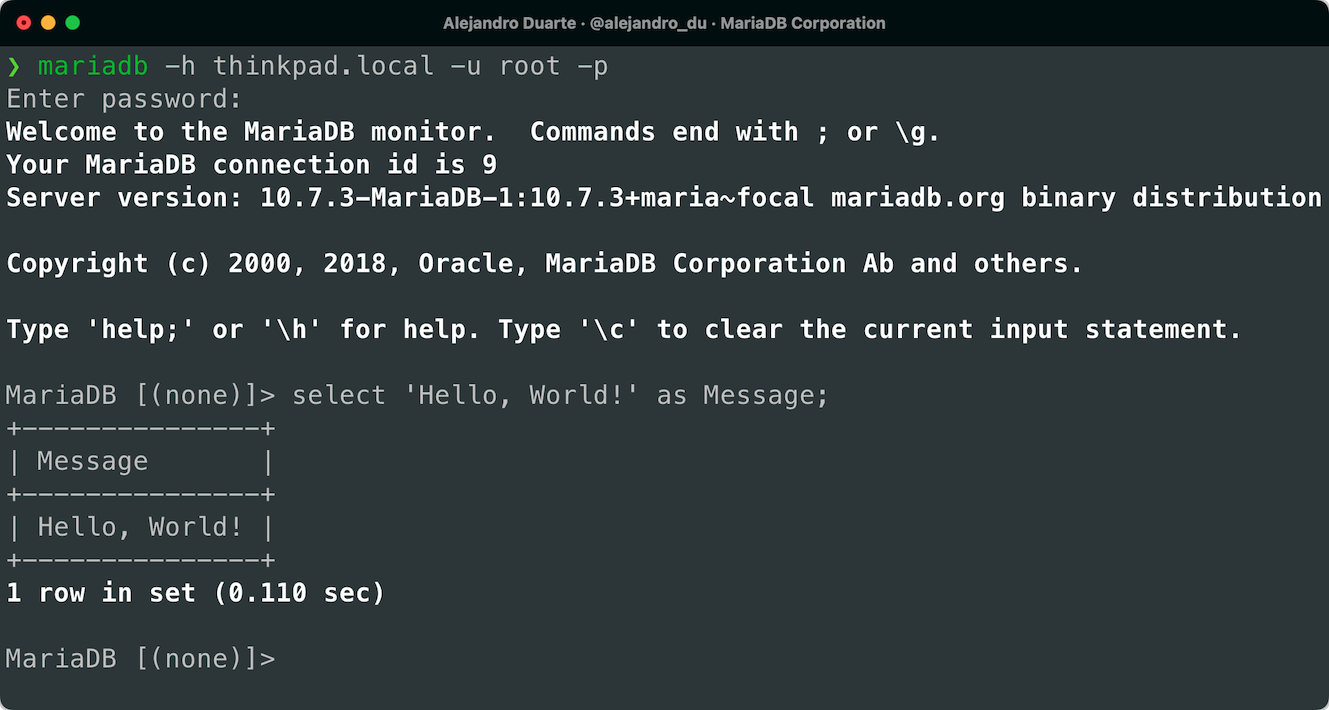 Congratulations! Your old laptop is now your new database server.

Maybe you want to create a new “almost root” user as well:

There are many other things you can install on your new server. Continuous Integration servers, web servers, email servers, etc. The Docker Hub is a huge directory of images that you can safely try in isolated Docker containers. You can always run containers and remove them when you are done with your experiments. For example, you can remove the MariaDB container as follows:

Now you can create tables that use the ColumnStore engine: