Gives Java developers a wide range of execution commands, tips for debugging Mavenized builds, and a clear introduction to the Maven vocabulary.

Maven is a comprehensive project information tool, whose most common application is building Java code. Maven is often considered an alternative to Ant, but as you’ll see in this Refcard, it offers unparalleled software lifecycle management, providing a cohesive suite of verification, compilation, testing, packaging, reporting, and deployment plugins.

Maven is receiving renewed recognition in the emerging development space for its convention over configuration approach to builds. This Refcard aims to give JVM platform developers a range of basic to advanced execution commands, tips for debugging Mavenized builds, and a clear introduction to the “Maven vocabulary”.

New Maven users are pleasantly surprised to find that Maven offers easy-to-write custom build-supplementing plugins, reuses any desired aspect of Ant, and can compile native C, C++, and .NET code in addition to its strong support for Java and JVM languages and platforms, such as Scala, JRuby, Groovy and Grails.

All things Maven can be found at http://maven.apache.org
Section 2

Maven supplies a Unix shell script and MSDOS batch file named mvn and mvn.bat respectively. This command is used to start all Maven builds. Optional parameters are supplied in a space-delimited fashion. An example of cleaning and packaging a project, then running it in a Jetty servlet container, yet skipping the unit tests, reads as follows:

The world of Maven revolves around metadata files named pom.xml. A file of this name exists at the root of every Maven project and defines the plugins, paths and settings that supplement the Maven defaults for your project.

The smallest valid pom.xml, which inherits the default artifact type of “jar”, reads as follows:

The Super POM is a virtual pom.xml file that ships inside the core Maven JARs, and provides numerous default settings. All projects automatically inherit from the Super POM, much like the Object super class in Java. Its contents can be viewed in one of two ways:

Open the following SVN viewing URL in your web browser:

Run the following command in a directory that contains the most minimal Maven project pom.xml, listed above.

Maven showcases exceptional support for componentization via its concept of multi-module builds. Place sub-projects in sub-folders beneath your top level project and reference each with a module tag. To build all sub projects, just execute your normal mvn command and goals from a prompt in the top-most directory.

Each Maven project produces an element, such as a JAR, WAR or EAR, uniquely identified by a composite of fields known as groupId, artifactId, packaging, version and scope. This vector of fields uniquely distinguishes a Maven artifact from all others.

Many Maven reports and plugins print the details of a specific artifact in this colon separated fashion:

An example of this output for the core Spring JAR would be:

Maven divides execution into four nested hierarchies. From most-encompassing to most-specific, they are: Lifecycle, Phase, Plugin, and Goal.

Maven defines the concept of language-independent project build flows that model the steps that all software goes through during a compilation and deployment process. 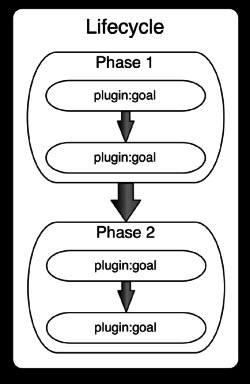 Each step in a lifecycle flow is called a phase. Zero or more plugin goals are bound to a phase.

A plugin is a logical grouping and distribution (often a single JAR) of related goals, such as JARing.

A goal, the most granular step in Maven, is a single executable task within a plugin. For example, discrete goals in the jar plugin include packaging the jar (jar:jar), signing the jar (jar:sign), and verifying the signature (jar:sign-verify).

Executing a Phase or Goal

At the command prompt, either a phase or a plugin goal can be requested. Multiple phases or goals can be specified and are separated by spaces.

Conversely, if you ask Maven to execute a phase, all phases and bound plugin goals up to that point in the lifecycle are also executed. This example requests the deploy lifecycle phase, which will also execute the verification, compilation, testing and packaging phases.

To prepare for compiling offline, you can instruct Maven to download all referenced artifacts from the Internet via the command:

If all required artifacts and plugins have been cached in your local repository, you can instruct Maven to run in offline mode with a simple flag:

The official lifecycle reference, which extensively lists all the default bindings, can be found at http://maven.apache.org/guides/introduction/introduction-to-the-lifecycle.html

The clean lifecycle is simplistic in nature. It deletes all generated and compiled artifacts in the output directory.

The site lifecycle generates a project information web site, and can deploy the artifacts to a specified web server or local path.

The default goal codifies the author’s intended usage of the build script. Only one goal or lifecycle can be set as the default. The most common default goal is install.

Help for a Plugin

Lists all the possible goals for a given plugin and any associated documentation.

To view the composite pom that’s a result of all inherited poms:

To view all profiles that are active from either manual or automatic activation:

To express your project’s reliance on a particular artifact, you declare a dependency in the project’s pom.xml.

You can use the search engine at repository.sonatype.org to find dependencies by name and get the xml necessary to paste into your pom.xml

Each dependency can specify a scope, which controls its visibility and inclusion in the final packaged artifact, such as a WAR or EAR. Scoping enables you to minimize the JARs that ship with your product.

A plugin and its configuration are added via a small declaration, very similar to a dependency, in the <build> section of your pom.xml.

Maven created an acronym for its plugin classes that aggregates “Plain Old Java Object” and “Maven Java Object” into the resultant word, Mojo.

There are dozens of Maven plugins, but a handful constitute some of the most valuable, yet underused features:

The full catalog of plugins can be found at: http://maven.apache.org/plugins/index.html
Section 8

Users often mention that the most challenging task is identifying dependencies: why they are being included, where they are coming from and if there are collisions. Maven has a suite of goals to assist with this.

Analyze dependencies and list any that are unused, or undeclared.

Repositories are the web sites that host collections of Maven plugins and dependencies.

The Maven community strongly recommends using a repository manager such as Nexus to define all repositories. This results in cleaner pom.xml files and centrally cached and managed connections to external artifact sources. Nexus can be downloaded from http://nexus.sonatype.org/

A near complete list of repositores can be found at http://www.mvnbrowser.com/repositories.html
Section 10

A wide range of predefined or custom of property variables can be used anywhere in your pom.xml files to keep string and path repetition to a minimum.

All properties in Maven begin with ${ and end with }. To list all available properties, run the following command.

Project properties could previously be referenced with a ${pom.basedir} prefix or no prefix at all ${basedir}. Maven now requires that you prefix these variables with the word project ${project.basedir}.

You can define a new custom property in your pom.xml like so:

If a Maven plugin is reporting an error, to see the full detail of the exception’s stack trace run Maven with the -e flag.

Whenever reporting a Maven bug, or troubleshooting a problem, turn on all the debugging info by running Maven like so:

Core Maven operations and plugins can be stepped through with any JPDA-compatible debugger, the most common option being Eclipse. When run in debug mode, Maven will wait for you to connect your debugger to socket port 8000 before continuing with its lifecycle.

Your suite or an individual unit test can be debugged in much the same fashion by telling the Surefire test-execution plugin to wait for you to attach a debugger to port 5005.

Your project’s SCM connection can be quickly configured with just three XML tags, which adds significant capabilities to the scm, release, and reactor plugins.

The connection tag is your read-only view of your repository and developerConnection is the writable link. URL is your web-based view of the source.

Over 12 SCM systems are supported by Maven. The full list can be viewed at http://docs.codehaus.org/display/SCM/SCM+Matrix

The diff command produces a standard Unix patch file with the extension .diff of the pending (uncommitted) changes on disk that can be emailed or attached to a bug report.

The update-subprojects goal invokes a recursive scm-provider specific update (svn update, git pull) across all the submodules of a multimodule project.

Profiles are a means to conditionally turn on portions of Maven configuration, including plugins, pathing and configuration.

The most common uses of profiles are for Windows/Unix platform-specific variations and build-time customization of JAR dependencies based on the use of a specific Weblogic, Websphere or JBoss J2EE vendor.

The full Maven Profile reference, including details about when to use each of the profile definition files, can be found at http://maven.apache.org/guides/introduction/introduction-to-profiles.html
Section 14

Profiles can be activated manually from the command line or through an activation rule (OS, file existence, Maven version, etc.). Profiles are primarily additive, so best practices suggest leaving most off by default, and activating based on specific conditions.

Maven offers excellent automation for cutting a release of your project. In short, this is a plugin-guided ceremony for verifying that all tests pass, tagging your source code repository, and altering the POMs to reflect a product version increment.

The prepare goal runs the unit tests, continuing only if all pass, then increments the value in the pom <version> tag to a release version, tags the source repository accordingly, and increments the pom version tag back to a SNAPSHOT version.

After a release has been successfully prepared, run the perform goal. This goal checks out the prepared release and deploys it to the POM’s specified remote Maven repository for consumption by other teams and Maven builds.

An archetype is a powerful template that uses your corporate Java package names and project name in the instantiated project and establishes a baseline of dependencies, with a bonus of basic sample code.

You can leverage public archetypes for quickly starting a project that uses a familiar stack, such as Struts+Spring, or Tapestry+Hibernate. You can also create private archetypes within your company to offer new projects a level of consistent dependencies matching your approved corporate technology stack.

The default behavior of the generate goal is to bring up a menu of choices. You are then prompted for various replaceables such as package name and artifactId. Type this command, then answer each question at the command line prompt.

The Maven Archetype plugin comes bundled with a default catalog of applications it can create, but other projects on the Internet also publish catalogs. To use an alternate catalog:

A list of the most commonly used catalogs is as follows:

Maven has a robust offering of reporting plugins, commonly run with the site generation phase, that evaluate and aggregate information about the project, contributors, it’s source, tests, code coverage, and more.

A list of commonly used reporting plugins can be reviewed here http://maven.apache.org/plugins/