Despite much progress in the testing framework space, creating automated tests can still require a significant amount of prerequisite coding knowledge. Automated testing solutions, particularly those based in the cloud, offer unique opportunities for teams across an organization — including developers, testers, and non-technical stakeholders. By abstracting large parts of the intricacies involved in automated test creation, each of these roles can align their approach specific to their skillset and needs.

Dive into the fundamentals of cloud-based test automation with this Refcard focused on advantages, considerations, and prominent tools: from code-based solutions to those offering low-code functionality and advanced capabilities like intelligent test automation.

As software engineering has advanced over the past few decades, automated testing has taken hold as the primary mechanism for validating applications. With the introduction of Continuous Integration (CI), Continuous Delivery (CD), and testing pipelines, developers can now automatically test and deploy their applications by simply committing a change to a repository. While lower-level tests can be easier to automate in the same language as the code itself, system and acceptance tests have been more difficult to automate due to their wider scope and abstraction.

Low-code and no-code tools have greatly reduced the burden on testers, but even these tools can require extensive understanding of the deployment environment and infrastructure. Cloud-based automated testing tools, on the other hand, provide a valuable addition to our toolbox and allow us to create and access our tests from anywhere without stressing about infrastructure.

In this Refcard, we will explore the basis of automated testing and delve into the details of how cloud-based automated testing solutions can dramatically improve our test suites and reduce the burden on both developers and testers.

The goal of software testing — whether automated or manual — is to ensure that our application or system adheres to its specifications. A specification can be as simple as a component producing a specific or discrete result, or it can be as complex as a component completing its execution within a statistically bound period of time.

Generally, our development will have four phases — or levels of specifications and corresponding tests:

We can visualize these phases using the V-Model: 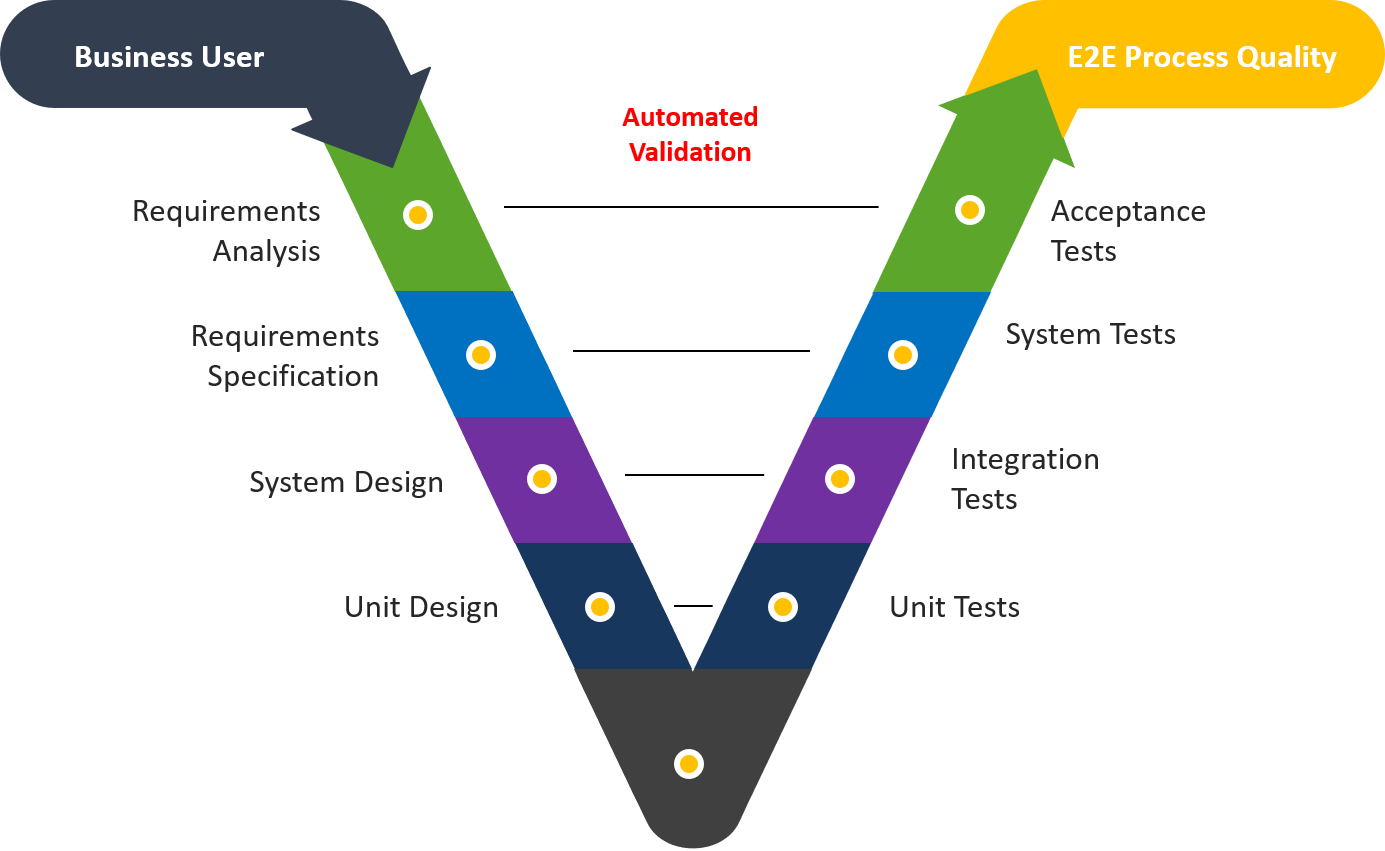 Tests can be executed either manually or automatically. While manual tests have their place — often as in visual or User Interface (UI) testing — they have been largely phased out, and for good reason. Manual tests are usually:

In contrast, automated testing — creating repeatable tests that can be executed on demand — has significant advantages over manual testing, including:

When a significant number of tests, called a suite, are accumulated for each phase, we can further automate our testing by creating a pipeline. A pipeline is a set of steps that we can automatically execute to exercise our system. Each stage in the pipeline generally corresponds to a phase of testing. For example, the following pipeline (or a variation of it) is common when testing larger systems:

At its genesis, a single change to our system — encapsulated as a commit to our version control system — results in a new execution of our pipeline. Each stage, from left to right, walks higher up the right side of the V-Model. In the case of the pipeline above, we may even include performance or accessibility tests (e.g., user acceptance testing, capacity testing, and staging stages), as well as a deploying stage that ultimately deploys our system into its production environment.

Regardless of the specifics of each stage and the combination of stages we utilize, when one stage of the pipeline successfully completes, the next stage executes. Once the entire pipeline completes, we know that the changes we made in our commit meet all of our specifications. The faster the pipeline executes, the faster we get feedback about our commit. Therefore, the more stages that we automate, the quicker we can get feedback about our change.

Lower-level stages, such as unit and integration testing, are usually easy to automate. At these points in the V-Model, tests are typically written by the development team in the same programming language as the components being exercised. As we work our way further up the V-Model toward system and acceptance testing, this is no longer the case. As the tests become more abstract, more often than not, non-developers will write the tests. For example, it is common that the stakeholders in a product may write the acceptance tests in a natural language, such as English.

Since these tests are being written by non-developers, automating them can be difficult. To solve this problem, we can use automated testing tools that translate natural language into automated actions, or even allow a tester to drag and drop actions to create tests. One of the best tooling options available is cloud-based test automation software.

Automated testing tools can largely be divided into three categories:

A large portion of automated tests are written using the code-based approach since this is a natural extension of existing automated testing processing. For example, a stakeholder will create a specification in a format derived from natural language, such as Gherkin, and then the development team will implement the steps in this specification in code. While this approach allows the development team to continue using the programming languages they are familiar with to implement the tests, it requires that the development team be involved in the process of creating high-level tests.

Ideally, stakeholders (without programming experience) should be able to create tests without needing to write any low-level code or calling on the development team to write low-level code on their behalf. While no-code tools do exist, low-code tools offer the benefit of more natural integration, while requiring much less technical input from stakeholders. In particular, cloud-based low-code testing tools provided a unique and valuable mechanism for creating low-code tests.

Unlike many other automated testing tools, cloud-based tools do not reside within the infrastructure of our company. Instead, these tools live on the internet and interact with our systems remotely, as illustrated below:

To create a test, a tester uses the tool's UI to create a workflow — or a set of actions — and states the expected results. This could mean dragging and dropping a set of clicks and actions or detailing the endpoint and payload of an Application Programming Interface (API) call. Once this workflow is established, the tester then creates a set of expected results, against which the actual results of the workflow can be verified. This test case is then stored in the cloud.

When executing a test, the tester can either run the entire suite of tests or some subset of tests. The tool then interacts with our deployed product and executes the workflows. Once the workflows are completed, the results are stored in the cloud. The tool can then compare the results against the expected results and show us which test cases passed and which ones failed.

In many cases, the tool can even drill down into which specific parts of a workflow failed and provide us greater insight into why our test cases failed. For example, some tools will provide a difference comparison (diff) between the actual and expected results of an API call. This allows us to focus on the output that differed from the expected results, rather than focus on the entirety of the output (which can be very large for some API calls). Many of these cloud-based tools will also include integration and support repositories such as GitHub and GitLab, as well as CI/CD tools like Jenkins.

Cloud-based automated testing tools have several significant advantages over their native peers, such as scalability and ease of access. However, it is also important to consider other aspects (e.g., security, integration) with existing infrastructure before committing to a cloud-based solution.

The benefits of cloud-based automated testing include:

In addition, many cloud-based automated testing tools include advanced capabilities, such as Artificial Intelligence (AI) and Machine Learning (ML). Since these cloud providers support a large number of products (not just our own), their ML and AI models incorporate a larger volume of data and can, therefore, be more accurate and provide greater insights. For example, if a cloud-based tool supports thousands of projects, the ML model for this tool would be based on a more comprehensive set of data compared to a company that supports only a handful of projects in house.

While cloud-based tools have a significant number of advantages, there are also a few points that should be considered before transitioning:

Cloud-based tools can be valuable in a wide array of situations, but it is still important to consider the specific needs of our product and ensure that these tools integrate well into our environments and provide maximal benefit to our testing infrastructure.

The cloud-based automated testing tools space is relatively young, but a few products have already earned their popularity:

Automated testing has taken hold as the dominant mechanism for testing software — and for good reason. Even with advancements such as code-based unit and integration test frameworks, creating automated tests can still require a significant amount of prerequisite coding knowledge. Cloud-based automated tools abstract a large portion of these intricacies and allow testers to access their test suites from anywhere. Even though the cloud-based tooling space is still maturing, tools such as mabl, Katalon TestCloud, and UTF One can provide a significant boost in performance to both large and small teams.