As the threat landscape continuously evolves, it is crucial for organizations to adopt a shift left for security mindset — ensuring that security is prioritized and its importance equated to that of automation and collaboration among distributed teams.

In this Refcard, you’ll review the challenges associated with integrating security practices into a continuous delivery pipeline, including the blockers development teams in particular often face. Also covered are the key areas to consider when administering and maintaining security of CD pipelines.

In this Refcard, we delve into various challenges and key considerations for administering robust security into continuous delivery pipelines. 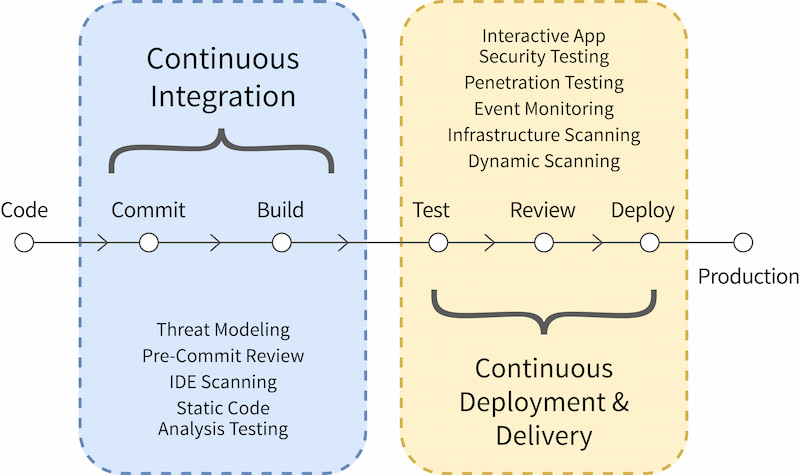 Enforcing CD security is crucial for enterprises as it enables developers, operators, and security teams to make informed decisions on the deployment pipeline’s architecture and workflow pattern. Integrating security into a delivery pipeline allows software teams to automatically run stress, acceptance, and performance tests, documenting early warnings of security risks before they make it into production. While CD helps to deliver advanced features and bug patches rapidly, organizations remain mostly apprehensive toward various challenges in securing a continuous delivery pipeline.

Challenges of Maintaining Security in a CD Pipeline

CD pipelines are built to shorten delivery times, which fundamentally remains the prime concern of organizations that are looking to perform extensive security and QA analyses. Some common challenges of implementing security within CD pipelines include: an inconsistent approach to services, resistance from developers, reduced delivery velocity, compliance requirements, and inadequate integration of security automation tools.

While containers offer a lightweight, portable, and platform-independent deployment option, they require a non-traditional approach to protect workloads that is considerably more complex than securing monolithic frameworks. Security profiling tools in such instances often need more memory and processing power than a container image can be allocated. Due to the distributed nature of multiple loosely coupled services, the framework requires security controls to be broken down and deployed at the service level while ensuring minimal impact to orchestration patterns. As each service relies on independent platform configuration and threat control, any inconsistency may lead to additional complexity of securing CD pipelines.

Securing a CD pipeline relies on successful collaboration between developers, security experts, QA, and operations teams. Developers usually restrain from implementing CD security practices, as dealing with infrastructure engineering and production troubleshooting adds to their workload. Most developers are accustomed to a specific technology stack that helps build functional code quickly without factoring in cyber threats and security best practices. Administering robust security throughout the CD pipeline also implies more time spent testing the code. This essentially requires developers to adopt incremental security checks throughout their programming process, and hence, is one of the most common reasons for developer resistance toward a security-first approach.

The core objective of DevOps CD pipelines is to automate frequent deployments and updates. While attributing more importance to automation and collaboration as the fundamental benefits of a DevOps model, security is often viewed as an afterthought, where security tests are performed at the end of the software development lifecycle.

Traditional approaches of static and dynamic application security testing rely on scanning the entire codebase, even with a few committed changes. As CD pipelines undergo frequent code changes, such testing mechanisms eventually reduce the velocity at which newer features make it to production. Besides this, modern applications operate on a loosely coupled service architecture, with each service requiring its own stack of application security solutions. Aggregating data from these disparate sources introduces bottlenecks in security decision-making processes, further slowing down the CD pipeline.

Industry standards and security frameworks offer guidance on the way data should be transmitted between different systems in a continuous delivery toolchain. Although these guidelines help adopt industry best practices, implementing them adds to effort overhead toward monitoring, testing, and documentation. As CD pipelines leverage distributed environments for deploying different components of the workload, comprehensive observability of infrastructure and compliance risks is often a complex undertaking. Security compliance monitoring and audits require the proper alignment between architecture principles, coding practices, and safety controls, which further add to the complexity of modern deployment pipelines.

Although most security solutions offer a web UI or CLI tool for integrating and interacting with the CD pipeline, lack of comprehensive automation is often considered insufficient for holistic security. In the absence of appropriately administered automation, a CD pipeline relies on human intervention to perform security management functions at predefined checkpoints. A pipeline should also be configured to move seamlessly from one stage of the application security testing process to the next.

Besides this, once a vulnerability is identified, developers are responsible for taking down the affected service and making sure the application stays available while they build security patches. Lack of automation in administering security not only raises manual overheads but is also considered an inefficient approach of mitigating attacks in real time.

Software security testing aims to identify threats and system weaknesses before they can be exploited in production. Used by QA teams and security experts alike, comprehensive testing helps to determine a system’s vulnerability score and provides guidance for hardening security measures.

Figure 2: Essentials of security within the CD pipeline

Application security tools scan, analyze, and report the security posture of an application across different phases of the CI/CD pipeline. An AST mechanism is primarily categorized into the groups shown in the table below:

RASP is an advanced technology that has evolved over time to respond to security vulnerabilities and attacks in real time. The tool runs on an application server to help obtain collective visibility of the application's source code and underlying runtime components. RASP protection tools are primarily used to detect active threats while sniffing out and isolating malicious actors. While RASP can be customized differently for prevention tactics, the most common approaches are to either issue an alert, terminate the session, or both.

SCA automates the identification of open-source software vulnerabilities used within the application stack. A typical software composition analysis involves scanning the container images, manifest files, source code, and binary files to come up with a Software Bill of Materials (SBOM), which is compared against a database of known vulnerabilities for security posture evaluation. SCA tools also enable security teams to evaluate the code quality, license limitations, and compliance of open-source software used within an existing workflow.

Vulnerability scanning and penetration testing are active threat identification processes that involve inspecting the application from an attacker’s point of view. Though the processes are mostly used as two separate approaches, they can also be used as concurrent steps to identify application flaws.

As the first step, vulnerability scanning helps proactively identify weaknesses within the enterprise network. Once these vulnerabilities are identified, security professionals perform penetration tests to see how the attacker can exploit them to orchestrate attacks. Beyond identifying system weaknesses, threat hunting functionalities also help determine the effectiveness of security controls in place and flag enhancement opportunities.

QA testing is the process of evaluating whether the software performs to customer expectations and the required standards of the user experience. Beyond testing the functional and technical performance of software, QA tests assess the product’s usability, compatibility, and known vulnerabilities.

On account of its multiple underlying components and sub-processes, securing a runtime often involves leveraging various tools and a collection of security controls, including:

Role-based access control (RBAC) is one of the most widely adopted mechanisms for governing permissions and actions of a CD pipeline at the component/sub-workflow level. The mechanism forms the foundation of CD security by relating data privacy, confidentiality, compliance, and access to specified resources and processes.

RBAC helps developers implement resource access as a function of the firm’s organizational structure, helping to group users efficiently based on seniority or functions performed. To achieve this, RBAC systems implement an innate separation of duties, breaking down sensitive functionalities into smaller units, thereby reducing the attack surface in the event of an account breach.

Threat modeling involves an elaborate analysis of how a system operates while examining the combination of user behavior with data flows across network components. Ethical hackers and security researchers commonly use threat modeling to identify potential security gaps and attack mechanisms of a tech stack to help mitigate known and unknown vulnerabilities. Though the process involves integrating security checks throughout the development lifecycle to identify and remediate security issues, the approach is considered one of the most critical security practices during the initial phases of system design.

Version/source control management (SCM) enables cross-functional teams to collaborate liberally without the apprehension of unwanted changes and updates. Leveraging a centralized branch as a single source of truth for all interlinked systems of the workflow, SCM tools retain committed changes in an organized and well-structured format. SCM tools also maintain comprehensive version history that allows CD security teams to roll back or undo erroneous updates.

Secrets such as user credentials, configuration files, API keys, tokens, and other sensitive information exist throughout the lifecycle of a CD pipeline. These secrets are considered one of the primary sources of data leakage and hence, should be consistently hidden, protected, and governed.

While seamless delivery of code through different phases of the SDLC is crucial, it is equally important to maintain robust security of secrets across all stages of the workflow. The adoption of secret management systems that streamline the storage and management of access management components is often considered a key factor that prevents unauthorized access of system resources without impacting delivery. Some of these solutions also offer encryption, key management, and identity management services, further simplifying the secure access to organizational data and resources.

Organizations that rely on third-party-developed open-source software often tend to overlook certain features and vulnerabilities of their source code. On account of the open source nature of such software, hackers typically possess detailed intricacies of the code along with the list of known vulnerabilities. Unsurprisingly, mitigating attacks in such workflows requires focused vulnerability scans of open-source components to identify weaknesses before they are exploited.

Vulnerabilities in open-source software commonly arise due to a number of factors, including:

Continuous delivery enables rapid builds by provisioning test environments that match production as closely as possible. Although integrating security across all stages of a CD pipeline has its own challenges, with automation and programmable infrastructure, it is possible to secure CD components and underlying processes. As the threat landscape continuously evolves, it is also critical for organizations to adopt a shift left for security mindset — the approach that essentially prioritizes security at par with automation and collaboration.