Evolving Stages of Collaboration Between Design and Development

Before diving into design systems, let’s review how the collaboration artifacts between design and development have progressed. We can classify this broadly into four levels:

In all levels, it is assumed that some form of design activity precedes development. That is, specifications for the UIs and flows are created prior to development.

This form of design-to-development communication is most common. At this level, visual mock-ups are created using tools used by visual designers (e.g. Sketch, Adobe XD). The specifications for styles, layout, sizing, etc. are added as annotations on top of the mocks for review.

Developers refer to this documentation as part of their development process and manually transfer this into code form. This approach is okay for custom one-off projects that don’t need to be maintained.

At this level, the visual design team is still sharing mockups and style guides with developers, but instead of a static document, they rely on tooling to provide the specs in a more accessible format. Using tools such as Zeplin.io, designers can upload their designs without taking the effort to markup the designs and developers can then view designs in the browser. More importantly, as they click on the design, developers can view the specifications on demand — even in a format that aligns with the target platform (e.g. HTML, CSS). 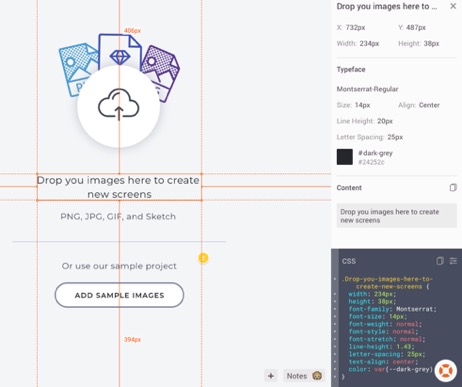 The key benefit of this approach is that designers don’t have to worry about manually adding annotations, and developers can still grab assets and specifications for any part of the UI. However, it’s not directly linked to any software components that are used by the organization.

At this level, we can expect that design and development have collaboratively created an inventory of styles, layouts, and UI components that are relevant for their app domain; in other words, a design system. At this stage, design teams tend to create designs using a UI kit that reflects the design system. UI kits are collections of reusable visual design elements created using the design tool itself (e.g. Sketch) and match the components in the codebase. This makes it easier for the development team to implement the designs because matching UI components exist. 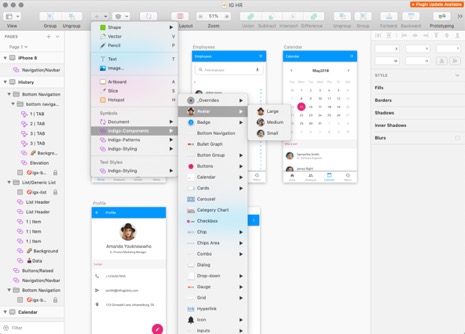 UI kit for the Indigo.Design System for use in the Sketch App

This by no means implies that the application is done. It’s just that developers can re-construct the mockups in code more easily. As you can tell, developers will still need to write UI code to make it looks like what’s specified, but at least they are doing it using reusable components that they know exist. This approach also reduces potential for miscommunication.

However, the bigger issue is that not all organizations have invested in a design system, so this level of collaboration is still in the future for most.

Having a design system does not automatically ensure that UIs can be quickly created, but it makes it easier. Within the enterprise, an application may get updated over time (versions) and the UI updates may not be that significant. This reduces the dependence on generating complete UIs. However, for those organizations that are getting started with large migration projects — for example, moving desktop apps to web apps — being able to create UIs in a visual tool and then generating “good” UI code is significant in terms of cost-savings. 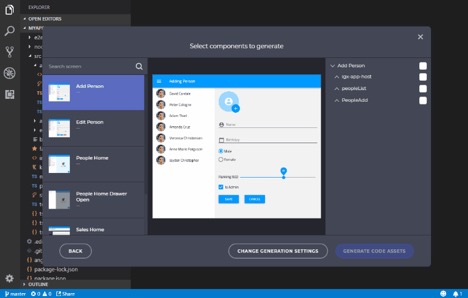 The Anatomy of a Design System

Now that we have a better idea of where a design system fits in the design to development story, let’s see how it’s structured.

A design system uses an approach for building scalable elements that can be best illustrated as atoms, molecules, and organisms. It’s generally referred to as the Atomic Design Methodology created by Brad Frost. It has become a popular approach for describing the structure of a design system. 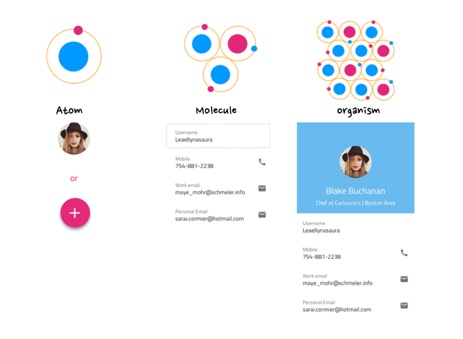 Illustrating the atom-molecule-organism concept with examples

Going one level deeper, atoms consist of particles such as protons and neutrons. For a design system, this can be mapped to the base color palette and typography, which define the brand identity for the organization.

Going one level up from atoms, you have molecules, which are composed of atoms. Molecules can be mapped to components and represent more complex structures such as menu item, list item, and dropdown item.

Then, by combining layouts and multiple components, we get next hierarchal unit: UX patterns. If we’re sticking to our biological comparison, that brings us to organisms. These encapsulate UX best practices by following “good” design principles and are built for the specific needs of a product.

The point of illustrating design systems as atoms, molecules, and organisms is to draw parallels with a living system. A design system should not be static and never-changing — it should reflect the product’s UX needs and constantly evolve with the product and technologies used. New requirements emerge because of new device layout requirements. New product features and brand identity changes are inevitable. We must be sure that our design system is flexible and ready to change for us to adapt to these changes.

Benefits of Using a Design System

One of the strongest benefits of a design system is preserving consistency around different devices, products, and sub-products, as well as coordinate with marketing and branding.

A common source of inconsistency is when different developers and designers are involved in the development of the product. Meanwhile, the increasingly decentralized nature of work, even across time zones, makes it expensive to do 1:1 reviews. With a design system in place, designers and developers can work independently in their own tools without requiring low-level checks around design implementation. They can instead focus on high-value interactions around outcomes.

From the customer’s perspective, meaningful consistency across applications offered by the same organization allows users to reuse what they’ve learned from past interactions with apps.

As Diana Mounter from GitHub puts it:

Shared Vocabulary Between Design and Development

While consistency is a big win, something as simple as mutually agreed upon naming for components and patterns can go a long way. This is helpful for current users of the design system and also for onboarding future members. Making the naming convention explicit and shared makes it easier for both developers and designers to find the components in their respective tool environments.

Over time, the names for the UX patterns will start surfacing in conversations, serving as a surrogate for user requirements. For example, when someone mentions we should use a combo-box component, it’s clear to both designers and developers what type of behavior it supports and how it can help with the user’s task experience. Since a design system documents a component as a pattern, it usually explains when to use a specific component and how to use it the right way — with examples. So, in that sense, a design system can fulfill the need for approachable UX guidance, thus evangelizing design practices.

Speed Up Design Process and Development

Speed to delivery is an explicit benefit of reusing components in a design system. From a design perspective, efficiencies come from not having to create new components or patterns since they are already part of the design system UI kits. Even when faced with the need to create a new complex pattern, designers can rely on the design system guidelines and build something using the “atoms” or “molecules” already available. From a developer’s point-of-view, being able to generate the code for this component or pattern helps avoid inconsistency between design specs and code.

Learning speed is a not-so-obvious benefit of using a design system approach. Now that designers are freed up from pixel crafting, they can return to the true design process, focusing on designing user journeys or flows and evaluating them with users. The approach used for creating design deliverables can also be used to produce interim prototypes for usability testing and getting feedback from stakeholders.

What’s the Future for Design Systems?

As we discussed, design systems offer common knowledge that can help align design and development. It’s a forum where teams can codify (as much they can) best practices. And since it’s supposed to be a living system, it also provides opportunities for new patterns and requirements to be discussed and then absorbed. More importantly, a design system is not just a repository, but a way to collaborate. However, it’s not a silver bullet for challenges faced by designers and developers when collaborating, nor does the existence of a design system preclude meaningful conversation between the two disciplines.

The biggest challenge for many enterprises is to get started with a design systems approach. For those who already have wide variety of apps in the wild, the initial phase is a tedious one. While there are several design systems available for reference, each has been created for its own parent organization. At the same time, they also share a lot in common with UX patterns and best practices, so there is a need for tooling and services to help organizations quickly create their own design system, rather than blindly copying.

Also, the atoms-molecules-organisms structure is only a starting point for design systems; it does not have to stop there. It can contain additional information on how the apps are supposed to behave. The following is a list of potential candidates for inclusion in a design system, which by no means is exhaustive: