An IDE for ActionScript and Flex Development

Introduces Drools, a rules engine for Java and .NET. Aimed at experienced developers who are new to Business Rule Management Systems (BRMS).

A Business Rule Management System is software that creates, supports, and executes decision logic and business rules. A business rule is comprised of actions that are taken when certain conditions are satisfied in the input data.

This Refcard focuses on Drools, a rules engine for Java and .NET, and is aimed at experienced developers who are new to BRMS.

The Benefits of a BRMS

Use a Rule Engine When...

Do Not Use a Rule Engine When...

Drools is a business rule management system (BRMS) that supports the JSR-94 standard and uses the forward chaining inference-based rules engine, while also supporting backward chaining, that runs on the enhanced implementation of the Rete algorithm.

Advantages of a Rule Engine 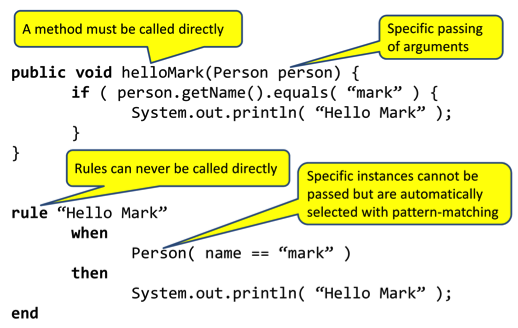 Instead of focusing on the direct implementation of the problem in imperative "how to" programming, the Rule engine allows you to declare the issue in a more understandable fashion for the user. The declaration of the problem focuses more on what is to be done instead of how to do it. This requires a cognitive shift when thinking about rule-based programs because rules are not called directly, as with methods, but are selected and fired by the rule engine.

Separating the rule logic from the code

Thanks to the Rule engine, it is possible to separate the code from the rule logic. One can keep the business logic in a set of files or decision tables that can be versioned separately.

Rules created in an understandable fashion

Drools provides a series of possibilities for defining rules. The simplest are either the Rule language used in the DRL files thanks to the use of the mvel dialect that makes them even more user friendly), or DSL (Domain Specific Language), which allows for the creation of rules by means of sentences or Decision Tables that can be defined in spreadsheets.

KnowledgeBase – a repository of rules

The KnowledgeBase interface in Drools defines a single point of entry to all rules. Due to this configuration, it is clear which rules belong to which knowledge base, thus making configuration easier to maintain.

Drools offers the choice of compiling the rules at runtime or precompiling them in order to minimize the number of runtime libraries. Bearing this in mind, here is the list of the most important libraries for Drools that you can include in your classpath:

Drools can be configured using Maven. Only drools-core, with its implicit dependencies, knowledge-api and knowledge-internal-api, is necessary to run the engine.

Once all of the necessary libraries are in the classpath, one can use the KnowledgeBuilder that compiles the rules and loads them into the repository of rules – KnowledgeBase. In the following example we will load a single DRL called rules.drl.

In order to fire the rules that were compiled and put into the KnowledgeBase, one has to create a Stateful or Stateless session, insert some Facts into it, and then perform the execution of the rules as shown in the following example. We assume that the DRL file contained a rule that will switch the ProductType from MEDICAL to ELECTRONIC and vice versa:

Since Spring IOC is one of the most commonly used IOC frameworks, Drools is designed to easily integrate with the Spring container by using the drools-spring Maven dependency or a respective jar.

If the number of processed rules is substantial, a dedicated machine that remotely executes the rule logic compiled in the KnowledgeBases may be required. In such cases, the Drools Execution Server is deployed in an application server. It uses Spring and Camel to route the inbound XML Command messages to the proper node and Knowledge Session. CXF as the services framework listens to REST/SOAP requests.

To the URI: ${drools_server_app_uri}/kservice/rest/execute gives this result:

Drools has a native language called Drools Rule Language (DRL). A DRL file is a simple text file in which you specify a package name, multiple rules, queries, types, functions, and resource declarations such as imports and globals. The order in which these elements are declared is not important except for the package name that, if declared, must be the first element in the rules file. All elements are optional.

A rule has the following general structure:

Punctuation is generally unnecessary, even the double quotes for "name" and newlines are optional. Attributes are simple optional hints as to how the rule should behave. LHS (Left Hand Side) is the conditional part of the rule, and RHS (Right Hand Side) is basically a block that specifies the dialect-specific semantic (action) code to be executed.

Rule attributes are a declarative way to influence the behavior of the rule engine when it activates or fires a.

Rules supports both interval- and cron-based timers. Interval (indicated by "int:") timers follow the semantics of java.util.Timer objects, with an initial delay and an optional repeat interval:

The Left Hand Side

The Left Hand Side (LHS) is the conditional part of the rule. It consists of zero or more Conditional Elements. If the LHS is empty, it is considered always true and is activated once, when a new session is created. A pattern is the most important Conditional Element. It can potentially match on any fact inserted in the working memory. A pattern contains zero or more constraints and has an optional pattern biding, meaning that the object used in a pattern, or some of its attributes, can be bound to variables that can then be used in the following patterns or in the consequence.

In its simplest form with no constraints, a pattern matches against a fact of the given type:

Patterns may refer to superclasses or even interfaces, thereby potentially matching facts from many different classes:

A comma-separated list of constraints with an implicit AND connective semantic can be added between the pattern parenthesis:

It is possible to bind the matched object, or the value of one of its property, to a variable in order to refer to that variable in other subsequent patterns or in the RHS:

The prefixed dollar symbol ($) is just a convention: it can be useful in complex rules where it helps to easily differentiate between variables and fields, but it is not mandatory.

Patterns can be combined into logical conjunctions (AND) and/or disjunctions (OR). Drools supports both infix:

Patterns can also be modified by prepending them with a first order logic existential (exists) and non-existential (not) quantifier. While the function of the not quantifier is obvious ("there must be none of..."), the existing one could appear redundant, but it is not because it has the meaning of "there is at least one…" while the pattern on its own can be thought as "for each one of . . ."

The conditional element forall completes the first order logic support in Drools: it evaluates to true when all facts that match the first pattern match all the remaining patterns. For example, to check that all the English buses are red, one could write

The conditional element from enables users to specify an arbitrary source for data to be matched by LHS patterns. This allows the engine to reason over data not in the Working Memory. The data source could be the results of a method call or a sub-field on a bound variable, for example:

The conditional element collect allows rules to reason over a collection of objects obtained from the given source or from the working memory. In terms of first order logic, this is the cardinality quantifier. For example, to check if a system has 3 pending alarms or more:

The conditional element accumulate is a more flexible and powerful form of collect because it allows a rule to iterate over a collection of objects by executing custom actions for each of the elements, and at the end it returns a result object. accumulate supports both the use of pre-defined accumulate functions and the use of inline custom code. The top level accumulate syntax is:

For instance, a pattern to calculate the minimum, maximum and average temperature reading for a given sensor and to match if the minimum temperature is under 20C degrees and the average is over 70C degrees could be written in the following way:

In the end, the conditional element eval is essentially a catch-all that allows any semantic code that returns a boolean to be executed. eval can refer to variables that were bound in the LHS, and it functions in the rule package. Still, it has to be used sparingly because it reduces the declarativeness of your rules and can result in a poorly performing engine.

The Right Hand Side

The Right Hand Side (RHS) contains the list of actions to be executed when the rule is fired. It should be kept small and avoid any conditional code, thus keeping it declarative and readable. It allows any Java or mvel code (depending on the chosen dialect), but its main purpose is to insert, retract, or modify working memory data and to interact with the engine. To do that, Drools provides the following convenience methods:

As an alternative to the update method, Drools provides the modify statement that is a more structured approach to notify the engine that the state of an object is changed and how it is changed. The syntax of this statement is:

For example, this example illustrates a simple fact modification;

A package represents a namespace that groups a set of rules. The package name itself is the namespace, and it is not related to files or folders in any way. Its declaration, if present, must be the first statement in the DRL file, for example:

Functions are a way to put semantic code in a rule source file, alternative and equivalent to static Java methods in a helper class. Indeed, the main advantage of using functions in a rule is that you can keep the logic all in one place. A typical function declaration looks like this:

Despite Drools' working out of the box with plain Java objects as facts, it also allows the declaration of new types. To do that, it is enough to use the declare keyword followed by the name of the type and the list of its attributes with the respective types as follows:

A query is a simple way to search the working memory for facts that match the stated conditions and, therefore, it contains only the structure of the LHS of a rule as in the following example:

It is then possible to iterate over the query results, as in:

Decision tables are a way of modeling logic simply and clearly. Business Analysts often prefer Decision Tables because the rules, both conditions and actions, can be modified more easily and without having to know DRL, Java, or MVEL.

When to Use the Decision Tables

In order to use the JBoss Drools decision tables, you have to add the drools-decisiontables dependency, which contains all the necessary jars to use decision tables and drools as such. In Maven, we would add such a dependency in the following manner:

Each row represents a single rule, whereas each column is either an action, condition, or parameter.

All decision table configuration is written in hidden cells to prevent inadvertent edits by rule developers.