The Browser IDE for Firefox

Learn to debug, edit, and monitor any website's CSS, HTML, DOM, or JavaScript with Firebug for Mozilla Firefox.

Firebug is a free and open-source tool, available as a Mozilla Firefox extension, which allows debugging, editing and monitoring of any website’s CSS, HTML, DOM and JavaScript. It allows performance analysis of a website and has a JavaScript console for logging errors and watching values. Firebug has many other tools to enhance the productivity of today’s web developer. Firebug provides all the tools that a web-developer needs to analyze, debug and monitor JavaScript, CSS, HTML and Ajax. Firebug includes a debugger, error console, command line, and a variety of useful inspectors.

Firebug is developed as a Firefox addon and can be installed on Firefox like all other add-ons. In order to make Firebug work for non-Firefox browsers, there is a JavaScript “Firebug Lite” from Firebug which makes available a large set of Firebug features. Based on your browser version, you can install the corresponding Firebug version.

To use Firebug Lite on non Firefox browsers, visit http://getfirebug.com/firebuglite, copy the JavaScript from there and include it in your HTML code.

There is another easy and fast way to inspect an element. Just right click on the page component/section and select “Inspect Element” from the context menu. You can also directly select a DOM node under the HTML tab to view its style, layout, & DOM attributes.

Type the following code in an HTML file, save it and open it up with Firebug enabled Firefox (if Firebug is not enabled then press F12 key to activate it):

Click on the button to start the JavaScript profiler. You will see a table generated in the Firebug’s Console panel. Description and purpose of the columns:

Function: This column shows the name of each function.

Call: Shows the count of how many times a particular function has been invoked. (3 times for loop() function in our case.)

Percent: Shows the time consuming of each function in percentage.

Own Time: Shows the duration of own script in a particular function. For example foo() function has none of its own code. Instead, it is just calling other functions. So, its own execution time will be ~0ms. If you want to see some values for that column, add some looping in this function.

Time: Shows the duration of execution from start point of a function to the end point of a function. For example foo() has no code. So, its own execution time is approx ~0ms, but we call other functions in that function. So, the total execution time of other functions is 4.491ms. So, it shows 4.54ms in that column which is equal to own time taken by 3 loop() function + own time of foo().

File: Shows the file name of file with line number where the function is located

Firebug allows you to insert break points and step debug the JS code.

Now, under the Firebug’s “Script” tab, move your mouse pointer on the line number as shown in the image and click to insert a breakpoint.

To verify that you have inserted a break point, you can see the list of breakpoints in the “Breakpoints” panel on the right side of “Script” tab.

Click on the “Click Me!” button to start the execution. You will notice that JS execution is paused at the breakpoint that you set.

You can now step debug the JavaScript by pressing one of these buttons (Continue, Step Over, Step Into and Step Out)under the “Script” tab.

Tweak CSS on the Fly

Through Firebug, you can add, remove and change the CSS properties of inspected elements. This is a most useful feature of Firebug through which one can fix the UI issues rapidly and easily. You can watch the live demo of the changes that you are making in the CSS tab. If you want to add the ‘color’ property of an inspected element: 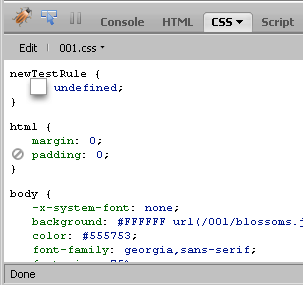 To disable a CSS rule, move the mouse pointer near to the CSS rule. Click on the ‘do-not’

icon that appears on the left side of the rule.

To change a specific CSS rule, simply click on the rule, a text editor will appear asking you for the new property or value.

Firebug also allows monitoring web pages of your application. A web app might appear to be slow to an end user due to Network latency, Order in which the files are loaded, Number of concurrent request made to server or Browser caching. Firebug’s Net panel allows you to monitor each and every file and request (XHR or HTTP). It generates a colorful graph accordingly on the basis of cycle of a request. Following image is an example of a request: 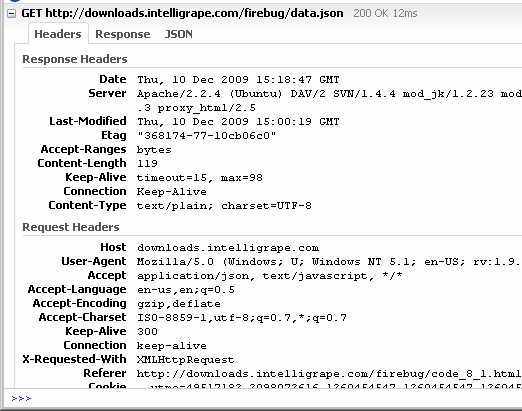 By default all the expressions and functions that you execute in the command line are relative to the top level window of the page. For example, you cannot invoke any function from Firebug’s command line if that function is defined in an iFrame within a page. Firebug provides a solution for such situation. The cd() method allows you to change the context of the window from main window to the iFrame.

When the context changes then you will be notified by FireBug.
Section 8

Firebug provides a lot of keyboard and mouse shortcuts in order to make working with Firebug easier and faster. As you become more experienced with Firebug, you will find yourself making more and more use of these shortcuts to accomplish common tasks instead of opening Firebug panel and then clicking on various tabs and buttons.

All of the console logging functions can format a string with any of the following patterns:

*If you need to include a real % symbol, you can escape it with a backslash like so: “\%”.