The management console and management command-line interface (CLI) make editing XML configuration files unnecessary and add the ability to script and automate tasks. While you can still edit the XML files manually it’s not suggested to do so.

Unzip the downloaded archive to your directory of choice.

Run the graphical installer with the following command:

Follow the instructions in the installation wizard to install JBoss EAP.

A JBoss EAP standalone server instance is an independent process (similar to previous JBoss EAP versions, e.g. 4 or 5). The configuration files, deployment content and writable areas used by the standalone server are found in the following subdirectories under the top level standalone directory:

A JBoss EAP managed domain server allows managing multiple servers from a single control point. A collection of multiple servers is referred to as a domain. Domains can span multiple physical (or virtual) machines with all JBoss EAP instances on a given host under the control of the host controller. The host controller interacts with each domain controller to control the lifecycle of the JBoss EAP instances running on that host and assists the domain controller in managing them. The configuration files, deployment content, and writable areas used by a managed domain process are found under the top level domain directory:

One way to manage JBoss EAP is through the command line interface (CLI). Both standalone servers and managed domains can be managed via CLI with the $JBOSS_HOME/bin/jboss-cli.sh (or %JBOSS_HOME%\bin\jboss-cli.bat for Windows users). Note: if managing a local instance of JBoss EAP, an administrative user may not be required for CLI.

The command line interface offers a way to manage all aspects of a server as well as read any runtime metrics that may be offered. It also supports tab completion for commands, resources, and operations.

The management model is separated into resources and attributes in the command line interface. A resource is referenced by a key-value pair. A resource can have child resources as well as attributes and operations. Operations are denoted with a colon prefix.

Attributes generally define the behavior of the services a resource manages. For example, the level attribute on a logger resource defines the minimum level the logger should log messages at.

By default, the command line interface starts up in a disconnected state. To connect to a running server, simply type connect <protocol>://<host>:<port> into the prompt. Note that <host> and <port> are not required and default to localhost and 9990, respectively. The <protocol> is only needed in rare cases when you need to override the default protocol. You can also easily connect by passing the -c and --controller arguments to the script.

For a Remote Server

For a Locally Running Server

Example of executing a read-resource operation:

The command line interface also allows files containing commands to run using the batch --file=/path/to/file command or by passing an argument to the CLI startup script.

JBoss EAP also provides a web console to administer both standalone servers and managed domains. To access the web console, you must first create a management user using the add-user script. Then in a web browser navigate to http://localhost:9990. 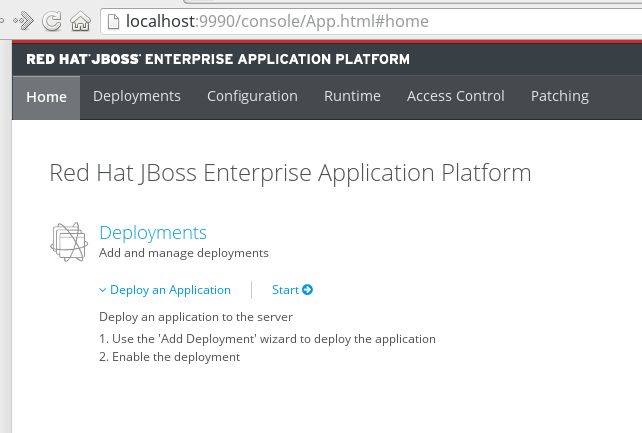 There are several ways to deploy an application. You can deploy to both standalone servers and managed domain servers via the command line interface, web console, Maven plugin, JBoss Tools (and other IDE’s), or even roll your own deployer.

A standalone server also has a deployment directory where archives or exploded content can be deployed. This directory is controlled by the /subsystem=deployment-scanner resource. See the README.txt file in the $JBOSS_HOME/standalone/deployments directory for details on how this works.

This will open a wizard to deploy an application: 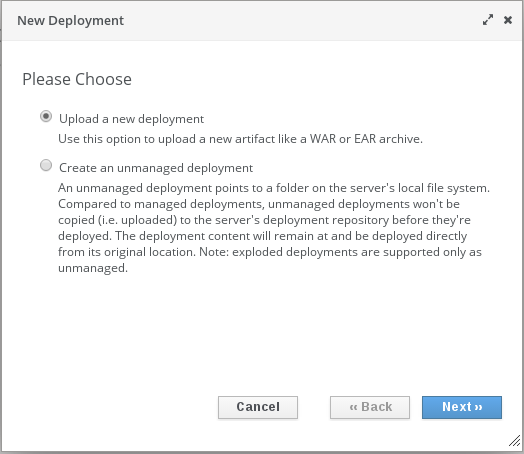 The command line interface offers a deploy command for both standalone servers and managed domains. Use deploy --help for detailed information about available arguments for the deploy command.

JBoss EAP also allows deployments to be done with the WildFly Maven Plugin. The Maven plugin can deploy to both standalone servers and managed domain servers. See the plugin documentation for more information on the goals it provides https://docs.jboss.org/wildfly/plugins/maven/latest/.

JBoss EAP uses modular-based class loading instead of the more familiar hierarchical class loading. Modules require explicit dependencies to be defined on any other modules they depend on. Deployments on JBoss EAP are also modules.

This means that it is possible for a deployment to import classes from another deployment using the other deployment's module name; the details of how to add an explicit module dependency are explained below.

A common source of errors in Java applications is including API classes in a deployment that are also provided by the container. This can result in multiple versions of the class being created and the deployment failing to deploy properly. To prevent this in JBoss EAP, module dependencies are added in a specific order that should prevent this situation from occurring.

EAR deployments are multi-module deployments. This means that not all classes inside an EAR will necessarily have access to all other classes in the EAR, unless explicit dependencies have been defined. By default, the EAR/lib directory is a single module, and every WAR or EJB JAR deployment is a separate module. Sub-deployments (WARs and EJB JARs) always have a dependency on the parent module, which gives them access to classes in EAR/lib; however, they do not always have an automatic dependency on each other. This behavior is controlled via the ear-subdeployments-isolated attribute in the EE subsystem configuration.

It is also possible to override the ear-subdeployments-isolated element value at a per-deployment level in the jboss-deployment-structure.xml described below.

Deployments (or, more correctly, modules within a deployment) may set up dependencies on other modules by adding a Dependencies: manifest entry. This entry consists of a comma separated list of module names that the deployment requires. The available modules can be seen under the modules directory in the application server distribution. For example, to add a dependency on Javassist and Apache Velocity, you can add a manifest entry as follows:

Each dependency entry may also specify some of the following parameters by adding them after the module name:

The jboss-deployment-structure.xml file is a JBoss-specific deployment descriptor that can be used to control class loading in a fine-grained manner. It should be placed in the top-level deployment in META-INF (or WEB-INF for web deployments). It can do the following:

For standalone servers, you can use the CLI module add command. This command will copy the resources on the local file system into the JBoss EAP modules directory.

By default, the --resources are separated by the file system's default path separator. Module dependencies are separated by a comma. This command will also generate a module.xml file for you and is the easiest way to add a module for standalone servers.

Modules can also be added manually. Note that this is currently the only way to add modules for managed domains. The following steps show how to create a module on Linux-based operating systems. Note the ending main directory is the slot of the module. This is the default slot for modules.

Open the module.xml file in a text editor of your choice and add the following content.

By default, standalone servers and each server in a managed domain log to a file named server.log. This file, as well as any other log file defined in the ${jboss.server.log.dir} directory, are available to be viewed through the command line interface, the web console, or by downloading the file via the HTTP management API.

The HTTP management API was not covered here, but this brief example of the API shows how to download a log file. With a simple GET request, the following URL will download the file. http://localhost:9990/management/subsystem/logging/log-file/server.log?operation=attribute&name=stream&useStreamAsResponse.

From the command line interface, you can execute the read-log-file operation to display the contents of the log file. This is useful if CLI is your only option. Using the web console or downloading via the HTTP management API is the preferred method.