Getting Started with Maven Repository Management

The Ultimate Solution for Codebase Management

Maven Repository managers serve two purposes: they act as highly configurable proxies between your organization and the public Maven repositories and they also provide an organization with a deployment destination for your own generated artifacts.

These are specific, point-in-time releases. Released artifacts are considered to be solid, stable, and perpetual in order to guarantee that builds which depend upon them are repeatable over time. Released JAR artifacts are associated with PGP signatures and checksums verify both the authenticity and integrity of the binary software artifact. The Central Maven repository stores release artifacts.

Reasons to Use a Repository Manager

Repository Groups:Repository managers can consolidate multiple repositories into a single repository group making it easier to configure tools to retrieve artifacts from a single URL. 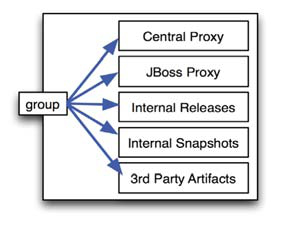 Procuring External Artifacts:Organizations often want some control over what artifacts are allowed into the organization. Many repository managers allow administrators to define lists of allowed and/or blocked repositories.

Security and LDAP Integration:Repository managers can be configured to verify artifacts downloaded from remote repositories and to integrate with external security providers such as LDAP.

Repositories store artifacts using a set of coordinates: groupId, artifactId, version, and packaging. The GAV coordinate standard is the foundation for Maven’s ability to manage dependencies.

This set of coordinates is often referred to as a GAV coordinate, which is short for “Group, Artifact, Version coordinate.”

A group identifier groups a set of artifacts into a logical group. For example, software components being produced by the Maven project are available under the groupId org.apache.maven.

An artifact is simply a name for a software artifact. A simple web application project might have the artifactId “simple-webapp”, and a simple library might be “simple-library”. The combination of groupId and artifactId must be unique for a project.

Packaging describes the contents of the software artifact. While the most common artifact is a JAR, Maven repositories can store any type binary software format including ZIP, SWC, SWF, NAR, WAR, EAR, SAR.

Addressing Resources in a Repository

Tools designed to interact with Maven repositories translate artifact coordinates into a URL which corresponds to a location in a Maven repository. If a tool such as Maven is looking for version 1.2.0 of the some-library JAR in the group com.example, this request is translated into:

The Central Maven repository contains almost 90,000 software artifacts occupying around 100 GB of disk space. You can look at Central as an example of how Maven repositories operate and how they are assembled.

Nexus manages software “artifacts” required for development, deployment, and provisioning. If you develop software, Nexus can help you share those artifacts with other developers and end-users. Maven’s central repository has always served as a great convenience for users of Maven, but it has always been recommended to maintain your own repositories to ensure stability within your organization. Nexus greatly simplifies the maintenance of your own internal repositories and access to external repositories. With Nexus you can completely control access to, and deployment of, every artifact in your organization from a single location.

Nexus Open Source and Nexus Professional only have one prerequisite, a Java Runtime Environment (JRE) compatible with Java 5 or higher. To download the latest release of the Sun JDK, go to http://developers.sun.com/downloads/.

Unpack the Nexus distribution in any directory. Nexus doesn’t have any hard coded directories, it will run from any directory. If you downloaded the ZIP archive, run:

And, if you downloaded the GZip’d TAR archive, run:

When you start Nexus for the first time, it will be running on http://localhost:8081/nexus/. To start Nexus, find the appropriate startup script for your platform in the ${NEXUS_HOME}/bin/jsw directory.

The following example listing starts Nexus using the script for Mac OS X. The Mac OS X wrapper is started with a call to nexus start:

Configuring Nexus as a Service

To configure Nexus as a service on Linux:

To use Nexus, fire up a web browser and go to: http://localhost:8081/nexus. Click on the “Log In” link in the upper right-hand corner of the web page, and you should see the login dialog.

THE DEFAULT NEXUS USERNAME AND PASSWORD IS “admin” AND “admin123”.

After installing Nexus make sure to make the following configuration changes.

To use Nexus, you will configure Maven to check Nexus instead of the public repositories. To do this, you’ll need to edit your mirror settings in your ~/.m2/settings.xml file.

Place the following XML into a file named ~/.m2/settings. xml. This Maven Settings file configures your Maven builds to fetch artifacts from the public group of the Nexus installation available at http://localhost:8081/nexus/

And, add the following XML to your Maven project’s pom.xml:

What is a Proxy Repository?

Proxy repositories speed up your builds by serving frequently used artifacts from a local cache. They also provide for more stability in case when your internet connection or the remote repository becomes unavailable. 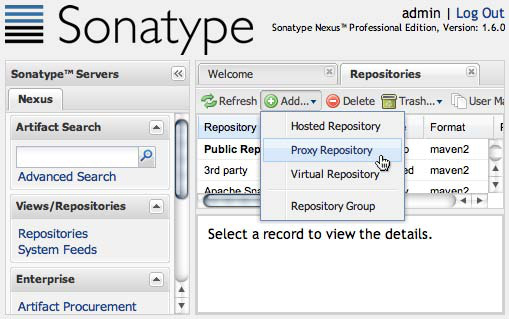 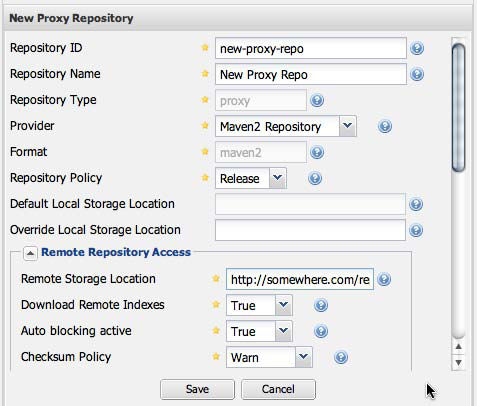 Supply a unique identifier and name, choose a Repository Policy of either Release or Snapshot, and provide the URL of the remote repository in the Remote Storage Location.

While Nexus is preconfigured with the Central Maven repository, it is not configured to download indexes from remote repositories. Enabling indexes is essential if you want to take full advantage of Nexus’ intuitive search interface. To enable Remote Index Downloads. Go to Views/Repositories -> Repositories. Select the Maven Central repository and click on the Configuration tab. Set “Download Remote Indexes” to true and click on Save. Nexus will then download the repository index from the remote repository. This process may take a few minutes depending on the speed of your connection.

If the remote index has been successfully downloaded and processed, the Browse Index tab for the Maven Central repository will display thousands of artifacts.

What is a Hosted Repository? 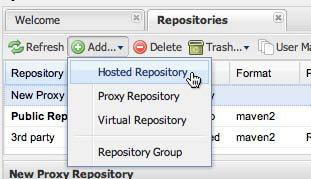 What is a Repository Group?

Adding Repositories to a Group

Nexus ships with a Public Repository Group which contains all of your hosted and proxy repositories. If you create a new repository, and you need to add this repository to the Public Group, go to Views/Repositories -> Repositories and select the Configuration tab. 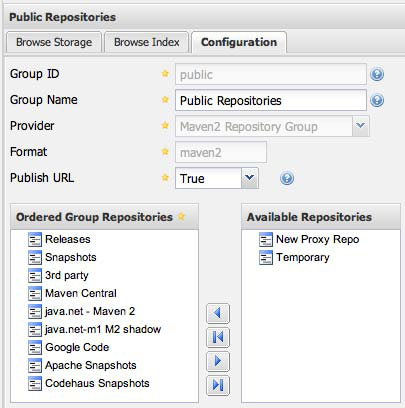 Reordering Repositories in a Group

To configure Sonatype Nexus, click on Administration -> Server this will load the Nexus configuration panel. The following is a list of some of the configuration sections in this panel:

SMTP Settings: Nexus supports release and deployment using email. Before Nexus can send emails, you will need to configure the appropriate SMTP settings in this section.

Security Settings: Nexus’ pluggable security providers are configured in this section. You can control which security realms are active and the order in which they are consulted during authentication and authorization.

Anonymous Access:Control how and if Nexus is made available to anonymous, unauthenticated users.

Application Server Settings:If Nexus is hosted behind a proxy, or if you need to customize the URL, you can do so here.

Backup All Nexus Configuration Files:Will cause Nexus to create a snapshot of all Nexus configuration files.

Download Indexes:Nexus will retrieve or update indexes for all remote, proxy repositories.

Evict Unused Proxy Items:If space is a premium, you can configure Nexus to remove proxy items which have not been used within a specific time period.

Remove Snapshots from Repository:Nexus can be configured to keep a minimum number of repositories and to delete snapshots older than a specific time period.

Scheduled tasks can be configured to send an email alert when they are executed, and you can schedule a task to run Once, Hourly, Daily, Weekly, Monthly, or using a custom cron expression.

Repository routes allow you to direct requests matching specific patterns to specific repositories. For example, if you wanted to make sure all requests for artifacts under org.someoss where directed to internal, hosted Releases and Snapshots repositories, you would define the following route:

To define a Repository Route, go to Administration -> Routing. The Routing panel is where you can edit existing routes and create additional routes.

Nexus Security has a highly configurable Role-based Access Control system which relies on Privileges, Roles, and Users. By default, Nexus ships with a default admin, deployment, anonymous user along with associated roles. To configure a new Nexus user, go to Security -> Users and open up the Users panel. On the users panel, click on the Add button to add a new Nexus user. Once the user is created, click on the user to edit the user’s email address or to assign the user new Nexus roles.

Nexus Professional is a central point of access to external repositories which provides the necessary controls to make sure that only approved artifacts enter into your software development environment. Central features of Nexus Professional are:

Nexus Procurement Suite:Gives Nexus administrators control of what artifacts are allowed into an organization from a remote repository.

Nexus Staging Suite:Provides workflow support for software releases. Artifacts can be deployed to staging repositories, tested, and promoted only after they have been tested and certified.

For more information about Sonatype’s Nexus, see the following resources:

Participate in the Nexus Community

Everyone is welcome to participate in the Nexus community as a developer or user. To participate, take advantage of the following resources: