Introduces Seam, a next generation web framework that integrates Java EE technologies with a wide variety of non-standard technologies.

Seam is a next generation web framework that integrates standard Java EE technologies with a wide variety of nonstandard technologies into a consistent, unified, programming model. Seam drove the development of Web Beans (JSR-299) and continues to develop innovations that are changing the face of web development as well as Java EE technologies. If you haven't taken a look at Seam, I suggest you do.

As you develop Seam applications, you'll find this reference a handy guide for understanding how Seam simplifies JSF development. This reference does not cover all of what Seam provides, but covers the most commonly used UI annotations and XML elements as of Seam 2.1.

While Seam is no longer limited to JSF as it's view layer, one of the framework's initial goals was simplifying JSF development. Seam plugs into the JSF lifecycle to provide a number of enhancements including:

Page navigation with JSF can be verbose and only provides a limited feature set. Seam provides a concise navigation language that incorporates conversation management, security, exception handling, request parameters, event notification, and more. Here we will discuss the pages namespace which defines the navigation flow of a Seam application as well as the navigation namespace for configuring the navigation components.

with Seam "orchestration” logic. This logic includes page parameters, conversation management, and allows navigation to be based on evaluation of arbitrary EL expressions instead of relying on return values. In addition, event notification is possible, generic exception handling, security restrictions, etc.

The Seam XML diagrams use the following notations to indicate required elements, cardinality, and containment: 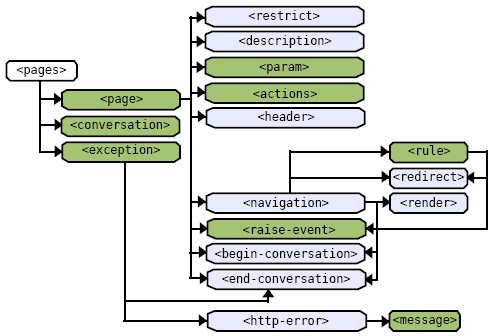 The following example defines a few pages with some simple navigation rules based on the execution of EL expressions:

When a hotel is selected on the /main.xhtml view and the selectHotel method is invoked, we begin a long-running conversation and the user is redirected to the /hotelxhtml view. A user is required to be logged in to access /main. xhtml. If the user is not logged in, he or she will be redirected

to the login-view-id, or /home.xhtml in this case. The /rewards.xhtml page is further restricted to users with the REWARDS role. The s:hasRole EL function throws an

AuthorizationException if the user is not authorized thereby ending the conversation and sending the user to the error page with an appropriate message.

Using Page Parameters and Natural Conversations
The following example defines a natural conversation named Booking. The parameter-name and parameter-value define the parameter that will be using to uniquely identify a conversation instance. You must ensure that the EL expression evaluates to a value when the conversation is initialized.

Note that all pages other than /hotel.xhtml specify conversation-required=”true”. This ensures that should a user attempt to access one of these pages outside the context of a long-runningconversation, the user will be redirected to the no-conversation-view-id defined in the <pages> tag.

The navigation namespace provides the ability to externalize configuration of the Pages component from the pages.xml file and override the location of pages configuration files.

Below is an example of <navigation:pages> definition:

The ports have now been defined for both HTTP and HTTPS. In addition, if a page has been configured as conversationrequired=” true”, the user will be redirected to /main.xhtml if a long-running conversation is not in progress. The loginview- id specifies that the user should be redirected to /home. xhtml if a login is required by a page definition and the user has not yet logged in.

The definition of components found in a typical JSF application is simple when using Seam. Data models, converters, and validators can be defined quickly with no XML configuration required through use of component annotations.

The following annotations simplify display of a clickable <h:dataTable> in JSF backed by a DataModel by directly binding a Collection to action attributes.

Seam provides a set of JSF components for controlling conversation propagation across both GET and POST requests. These components also extend the capabilities of JSF to allow GET requests to trigger actions and make it simple to define default page actions.

The conversation propagation can be controlled from a link through use of the <s:link> component. For instance, if you click on the following link, Seam leaves the current conversation when the main.xhtml page is loaded, just as a regular HTTP GET request would do.

We can also trigger an action during an HTTP GET request:

The <s:link> component has richer conversation-management capabilities than the plain JSF <commandbutton>, which simply propagates the conversation context between pages.

Ports change, so make it easy to change them.The http-port and https-port can be defined in components.xml rather than in pages.xml to allow use of wild-cards. Wild-cards are defined as @propertyValue@ and are replaced with values from a components.properties file. These ports can (and generally do) change based on environment which makes it useful to break these values out into a properties file for simple substitution.

In addition, by specifying the button is the <s:defaultAction/> the user is returned to /main.xhtml through a navigation rule should the user submit the form by pressing the enter key.

When developing JSF pages it is commonly required to associate the possible selections of a dropdown component with a list of objects or an enumeration of values. Unfortunately with standard JSF this requires quite a bit of glue code to achieve. Seam makes this simple through the <s:selectItems> and <s:enumItem> tags. Even further when the<s:convertEntity> and the <s:selectItems> tags are combined, you can directly associate JPA or Hibernate managed entities by simply binding a dropdown component to an entity association attribute.

The following example demonstrates directly associating a managed entity from a List of entities. The CreditCard class represents types of credit cards and the @NamedQuery allows us to load all CreditCard types from the data store.

The Booking class is then be defined with a @ManyToOne reference to the CreditCard entity.

In order to load the list of credit card types, the Booking Action can define an @Factory method which initializes the list of CreditCard entities in the conversation context.

The method simply uses the named query we defined previously to load the entities from the current Entity- Manager instance. Note that our Seam-managed Persistence Context (SMPC) is named entityManager. If your SMPC is named something other than entityManager, you will have to configure the EntityConverter in components.xml (see the UI Namespace).

Finally, we can define a JSF<h:selectOneMenu> component which simply binds directly to the creditCard attribute of the current booking instance.

The #{creditCardTypes} are loaded into the conversation context from the @Factory method we defined previously. The <s:selectItems> component allows us to iterate over the list of CreditCard entities and display the description by referencing the type variable. The <s:convertEntity> tag ensures that the user selection is converted to an entity for association with the booking instance.

When using Seam you can define validations directly on your entity beans that behave like JSF validators. These bean validators are provided by the Hibernate Validator framework

(http://validatior.hibernate.org), but with Seam can be triggered as JSF validations.

The Seam Booking example allows a user to enter her credit card number while booking a hotel. Credit card numbers have a common pattern and should be validated on input. The following example demonstrates how we can apply these restrictions using Hibernate Validator annotations:

The @Length annotation restricts the String length to 16 characters while the @Pattern annotation specifies a regular expression restricting the String to digits only. Once these annotations are added to the entity, we can trigger them as validations during the JSF validations phase. Simply embedding the <s:validate> tag within the <h:inputText> component ensures the validation is triggered. If an invalid credit card number is input, the user will be presented with the message defined in the annotation.

While validation becomes simple with Seam, standard JSF validation messages are not very flexible. Although you can

assign CSS classes to customize the look of the error message itself, you cannot alter the appearance of the input field that contains the invalid input. The following formatting tags allow you to decorate invalid fields with styles and messages. In addition to validation message formatting Seam provides formatting components for applying labels directly to JSF input fields, optionally rendering HTML <div> and <span> tags, and optionally rendering page fragments.

Now you can simply enclose each input field in a pair of <s:decorate> tags as shown below:

As you have seen, the <s:convertEntity/> tag provides the ability to convert entities to and from dropdown selections. In most cases this is as simple as defining <s:convertEntity> within the dropdown, but there are cases where this needs to be customized. The UI namespace allows you to configure

the EntityConverter component in the following cases:

In each of these cases, it is necessary to configure the Entity-Converter component using the UI namespace.

The following example configures the EntityConverter with a custom EntityManager name:

As you can see, the Seam-managed Persistence Context is given the name em. This is simply referenced through an EL expression in the jpa-entity-loader configuration.