The Spring Framework has forever changed the face of enterprise Java development, making it easier than ever to configure and assemble application objects and services in a loosely-coupled manner. As you develop your Spring-enabled applications, you'll find this reference card to be a handy resource for Spring context configuration. It catalogs the XML elements available as of Spring 2.5, highlighting the most commonly used elements. In addition to Spring XML configuration, there'll also be a guide to Spring's rich set of annotations, which are useful for minimizing the amount of XML needed to configure Spring.

Although the Spring Framework does many things, dependency injection is the foundational functionality provided by the Spring container. 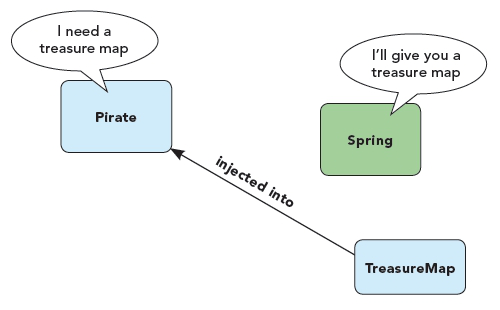 As of Spring 2.0, you are encouraged to use Spring's XML Schema-based configuration, which is more flexible than the legacy DTD-based XML. A typical Spring 2.5 configuration will have, at minimum, the following structure:

Within the <beans> element, you'll place bean declarations and other elements that configure your application's context. The "beans" namespace was the first and is still the primary namespace in Spring's XML configuration, but it isn't alone. Spring also comes with seven more namespaces that will be described in this reference card. If you wish to use one of the other namespaces, you'll need to be sure to declare them. For example, if you want to use the "context" namespace, you should declare it in XML as follows:

The beans namespace is the core Spring namespace and the one you'll use most when configuring Spring. The root element is the <beans> element. It typically contains one or more <bean> elements, but it may include elements from other namespaces and may not even include a <bean> element at all.

The Spring XML diagrams use the following notations to indicate required elements, cardinality, and containment:

Even though there are several XML elements that can be used to configure a Spring context, the one you'll probably use the most often is the <bean> element. Therefore, it only seems right that you get to know the attributes of <bean> in detail.

The following Spring XML configures two beans, one injected into the other:

The first bean is given "pirate" as its ID and is of type "Pirate." It is to be constructed through a constructor that takes a String as an argument, in this case, it will be constructed with "Long John Silver" as that value. In addition, its "map" property is wired with a reference to the "treasureMap" bean, which is defined as being an instance of TreasureMap.

Don't put all your beans in one XML file.

As configured above, <context:component-scan> will scan the "com.springinaction.service" package and will automatically register as beans all of the classes it finds that are annotated with @Component, @Controller, @Repository, @Service, or @Aspect.

Not all configuration has to be done in Spring. You wouldn't expect the administrators or end users of your application to dig around in Spring XML to tweak database or other deployment-specific details, would you? Instead, externalize configuration using <context:property-placeholder>:

The name-value pairs from /etc/pirate.properties can then be used to fill in placeholder values in the Spring context. For example:

The aop namespace makes it possible to declare aspects, pointcuts, and advice in a Spring context. It also provides support for annotation-based aspects using @AspectJ annotations. Using aspects, you can define functionality that is applied (or "woven") across many points of your application.

The following Spring configuration creates an aspect using elements from the aop namespace:

The elements in the "aop" namespace make it rather easy to turn plain old Java objects into aspects. But the <aop:aspectj-autoproxy> element can single-handedly eliminate the need for almost all other "aop" namespace XML. By placing <aop:aspectj-autoproxy> in your Spring configuration, you can move your pointcut and advice declaration into your Java code using @AspectJ annotations such as @Aspect, @Pointcut, @Before, and @After. Refer to Chapter 4, section 4.3.2 of Spring in Action, Second Edition for more details.

The JEE namespace provides configuration elements for looking up objects from JNDI as well as wiring references to EJBs into a Spring context.

The following Spring configuration uses a few of the jee namespace"s elements to retrieve objects from outside of Spring and configure them as Spring beans:

The first element, <jee:remote-slsb>, configures a bean named "Hispaniola" which is actually a reference to an EJB 2 remote stateless session bean. The EJB"s home interface is found in JNDI under the name "java:comp/env/ejb/PirateShip". The resource-ref attribute indicates that the value in jndi-name should be prefixed by "java:comp/env/". The EJB implements methods defined in the PirateShipEjb business interface.

The other element, <jee:jndi-lookup>, retrieves a reference to an object from JNDI (it could be an EJB 3 session bean or just a plain Java object). The object is found in JNDI under the name "pirate/Parrot". Because resource-ref is "false", the jndi-name is not prefixed with "java:comp/env/".

The JMS namespace provides elements for configuring message-driven POJOs, beans that respond to messages that arrive on a JMS destination (either a topic or a queue).

The following Spring configuration sets up a message-driven POJO that responds to messages that arrive on a queue.

The <jms:listener-container> configures a container for handling messages arriving on topics or queues coming in on the JMS connection factory. Within this element you may declare one or more <jms:listener> elements to respond to specific topics. In this case, the single <jms:listener> reacts to messages arriving in the "queue.bottle" topic, invoking the readMessageFromBottle() method of the "messageHandlerService" bean when they arrive.

The "lang" namespace enables you to wire scripted objects into Spring. These objects can be written in either Groovy, JRuby, or BeanShell.

In this Spring context, a Pirate bean is injected with scripted beans defined with <lang:groovy> and <lang:jruby>:

The <lang:groovy> element creates a bean that is implemented as a Groovy script called Compass.groovy and found in the root of the classpath. The refresh-check-delay attribute indicates that the script should be checked every 10 seconds for updates and reloaded if the script changes.

The <lang:jruby> element creates a bean that is implemented as a Ruby (JRuby, specifically) script called PirateHat.rb. It implements a PirateHat interface and is checked for updates once per minute.

The "tx" namespace provides support for declarative transactions across beans declared in Spring.

The following Spring configuration uses elements in the tx namespace to configure transactional rules and boundaries:

Next, the <tx:advice> sets up AOP advice that declares the transactional rules. In this case, any methods with names that start with "plunder" require transactions. All other methods support transactions, but do not require them. Finally, this example borrows from the aop namespace to configure an AOP advisor that uses the transactional advice. The pointcut here is for all methods in the Pirate class.

If you"re looking for ways to cut back on the amount of XML in a Spring configuration, consider using the <tx:annotation-driven> element. Once this element is in place, you can start annotating your beans and their methods with @Transactional to define transactional boundaries and rules. Have a look at chapter 6, section 6.4.4 of Spring in Action, Second Edition to learn more.

The utility namespace provides elements that make it possible to wire collections and other non-bean objects in Spring as if they were any other bean. 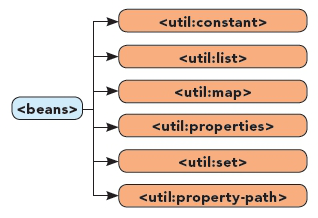 The <util:list> element is used here to create a list of Strings containing various phrases uttered by pirates. The <util:constant> element creates a reference to the constant (public static field) named PIRATE_CODE of the Pirate class. Finally, the <util:property-path> digs deep into the "pirate" bean, retrieving the value of the doubloonCount property of the treasure property of the bean named "pirate". In all three cases, the resulting values are exposed as beans in the Spring context, suitable for injection into other beans.

These annotations are used by Spring to guide creation and injection of beans.

The @Transactional annotation is used along with the <tx:annotation-driven> element to declare transactional boundaries and rules as class and method metadata in Java.

In addition, if a PersistenceExceptionTranslationPostProcessor is configured in Spring, any bean annotated with @Repository will have SQLExceptions thrown from its methods translated into one of Spring"s unchecked DataAccessExceptions.

These annotations were introduced in Spring 2.5 to make it easier to create Spring MVC applications with minimal XML configuration and without extending one of the many implementations of the Controller interface.

These annotations, used with the <context:mbean-export> element, declare bean methods and properties as MBean operations and attributes.

These annotations are useful for creating unit tests in the JUnit 4 style that depend on Spring beans and/or require a transactional context.