Why PowerShell? Why Now? PowerShell was designed to do for Windows what the UNIX shells do for UNIX: provide a powerful, well-integrated command-line experience for the operation system. Unfortunately since Windows is mostly managed through objects (WMI, COM and .NET) this required creating a new kind of shell. So why create it now? As Windows moves off the desktop and into server farms or application servers like print, DNS and LDAP services, command-line automation becomes a fundamental requirement.

This refcard covers starting and using Windows PowerShell, including the syntax for all statements, operators and other elements of the language. Also included are examples of how to use .NET, COM, ADSI and WMI objects from PowerShell. Finally, it includes tips and tricks"short examples showing how to perform common tasks from PowerShell.

Getting Started with PowerShell

PowerShell is freely available through the Microsoft Windows Update Service packaged as an optional update for Windows XP SP2, Windows Vista and Windows Server 2003. It is also included with Windows Server 2008 as an optional component. Once installed, it can be started from the Start menu or simply by running "powershell.exe". Basic things you need to know:

Commands: There are 4 categories of commands in PowerShell:

Pipelines: As with any shell, pipelines are central to the operation of PowerShell. However, instead of returning strings from external processes, PowerShell pipelines are composed of collections of commands. These commands process pipeline objects one at a time, passing each object from pipeline element to pipeline element. Elements can be processed based on properties like Name and Length instead of having to extract substrings from the objects.

Numbers: PowerShell supports all of the signed .NET number formats. Hex numbers are entered as they are in C and C# with a leading "0x" as in 0xF80e. Floating point includes Single and Double precisions and Decimal. Banker"s rounding is used when rounding values. Expressions are widened as needed. A unique feature in PowerShell are the multiplyer suffixes which make it convenient to enter larger values easily:

Strings: PowerShell uses .NET strings. Single and Double quoted strings are supported. Variable substitution and escape sequence processing is done in double-quoted strings but not in single quoted ones as shown:

The escape character is backtick instead of backslash so that file paths can be written with either forward slash or backslash.

Variables: In PowerShell, variables are organized into namespaces. Variables are identified in a script by prefixing their names with a "$" sign as in "$x = 3". Variable names can be unqualified like $a or they can be name-space qualified like: $variable:a or $env:path. In the latter case, $env:path is the environment variable path. PowerShell allows you to access functions through the function names space: $function:prompt and command aliases through the alias namespace alias:dir

Arrays: Arrays are constructed using the comma "," operator. Unless otherwise specified, arrays are of type Object[]. Indexing is done with square brackets. The "+" operator will concatenate two arrays.

Because PowerShell is a dynamic language, sometimes you don"t know if a command will return an array or a scalar. PowerShell solves this problem with the @( ) notation. An expression evaluated this way will always be an array. If the expression is already an array, it will simple be returned. If it wasn"t an array, a new single-element array will be constructed to hold this value.

HashTables: The PowerShell hashtable literal produces an instance of the .NET type System.Collections.Hashtable. The hashtable keys may be unquoted strings or expressions; individual key/value pairs are separated by either newlines or semicolons as shown:

Type Conversions: For the most part, traditional shells only deal with strings. Individual tools would have to interpret (parse) these strings themselves. In PowerShell, we have a much richer set of objects to work with. However, we still wanted to preserve the ease of use that strings provide. We do this through the PowerShell type conversion subsystem. This facility will automatically convert object types on demand in a transparent way. The type converter is careful to try and not lose information when doing a conversion. It will also only do one conversion step at a time. The user may also specify explicit conversions and, in fact, compose those conversions. Conversions are typically applied to values but they may also be attached to variables in which case anything assigned to that variable will be automatically be converted.

Here"s is an example where a set of type constraints are applied to a variable. We want anything assigned to this variable to first be converted into a string, then into an array of characters and finally into the code points associated with those characters.

Flow-control Statements: PowerShell has the usual collection of looping and branching statements. One interesting difference is that in many places, a pipeline can be used instead of a simple expression.

The condition part of an if statement may also be a pipeline.

foreach Cmdlet: This cmdlet can be used to iterate over collections of operators (similar to the map() operation found in many other languages like Perl.) There is a short alias for this command "%". Note that the $_ variable is used to access the current pipeline object in the foreach and where cmdlets.

where Cmdlet: This cmdlet selects a subset of objects from a stream based on the evaluation of a condition. The short alias for this command is "?".

switch Statement: The PowerShell switch statement combines both branching and looping. It can be used to process collections of objects in the condition part of the statement or it can be used to scan files using the "file option. 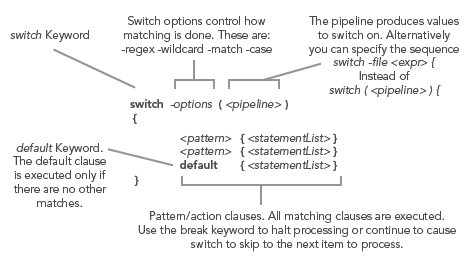 PowerShell has a very rich set of operators for working with numbers, strings, collections and objects. These operators are shown in the following tables.

Assignment Operators: PowerShell has the set of assignment operators commonly found in C-derived languages. The semantics correspond to the binary forms of the operator.

Copy console input into a file:

PowerShell Functions: Functions can be defined with the function keyword. Since PowerShell is a shell, every statement in a PowerShell function may return a value. Use redirection to $null to discard unnecessary output. The following diagram shows a simple function definition.

Advanced Functions: functions can also be defined like cmdlets with a begin, process and end clause for handling processing in each stage of the pipeline.

In general, the easiest way to get things done in PowerShell is with cmdlets. Basic file operations are carried out with the "core" cmdlets. These cmdlets work on any namespace. This means that you can use them to manipulate files and directories but can also use them to list the defined variables by doing

or remove a function called "junk" by doing:

Searching Through Text: The fastest way to search through text and files is to use the select-string cmdlet as shown:

The Select-String cmdlet is commonly aliased to "grep" by UNIX users.

Formatting and Output: by default the output of any expression that isn"t redirected will be displayed by PowerShell. The default display mode can be overridden using the formatting cmdlets:

Output is also handled by a set of cmdlets that send the output to different locations.

Unlike most scripting languages, the basic object model for PowerShell is .NET which means that instead of a few simple built-in types, PowerShell has full access to all of the types in the .NET framework. Since there are certain common types that are used more often than others, PowerShell includes shortcuts or type accelerators for those types. The set of accelerators is a superset of the type shortcuts in C#. (Note: a type literal in Powershell is specified by using the type name enclosed in square brackets like [int] or [string].

Operators For Working With Types

Accessing Instance Members: as is the case with most object oriented languages, instance members (fields, properties and method) are accesses through the dot "." operator.

The dot operator can also be used with an argument on the right hand side:

Methods can also be invoked indirectly:

Static methods are invoked using the "::" operator with an expression that evaluates to a type on the left-hand side and a member on the right hand side

Using Windows Forms to do GUI Programming from PowerShell:

Working With Date and Time

Use the Get-Date cmdlet to get the current date.

Do the same thing using the use static method on System.DateTime

Get the DateTime object representing the beginning of this year using a cast.

Get the day of the week for today

Get the total number of days since the beginning of the year.

Get the total number of hours since the beginning of the year.

Get the number of days between now and December 25th for this year.

Get the day of the week it occurs on:

Along with .NET, PowerShell also lets you work with COM object. This is most commonly used as the Windows automation mechanism. The following example shows how the Microsoft Word automation model can be used from PowerShell:

The "match operator will only retrieve the first match from a string. Using the [regex] class, it"s possible to iterate through all of the matches. The following example will parse simple arithmetic expressions into a collection of tokens:

The other major object model used in PowerShell is WMI"Windows Management Infrastructure. This is Microsoft"s implementation of the Common Instrumentation Model or CIM. CIM is an industry standard created by Microsoft, HP, IBM and many other computer companies with the intent of coming up with a common set of management abstractions. WMI is accessed in PowerShell through the Get-WMIObject cmdlet and through the [WMI] [WMISearcher] type accelerators. For example, to get information about the BIOS on your computer, you could do:

Support for active directory is accomplished through type accelerators. A string can be cast into an ADSI (LDAP) query and then used to manipulate the directory as shown:

PowerShell has no language support for creating new types. Instead this is done through a series of commands that allow you to add members (properties, fields and methods) to existing object. Here"s an example:

Working With XML Data: PowerShell directly supports XML. XML documents can be created with a simple cast and document elements can be accessed as though they were properties.

Errors and Debugging: The success or failure status of the last command can be determined by checking $?. A command may also have set a numeric code in the $LASTEXITCODE variables. (This is typically done by external applications.)

The default behavior when an error occurs can be controlled globally with the $ErrorActionPreference variable or, for a single command, with the -ErrorAction Parameter.

The trap Statement: will catch any exceptions thrown in a block. The behavior of the trap statement can be altered with the break and continue statements.

The throw Statement: along with the trap statement, there is a throw statement. This statement may be used with no arguments in which case a default exception will be constructed. Alternatively, an arbitrary value may be thrown that will be automatically wrapped in a PowerShell runtime exception.

The PowerShell format operator is a wrapper around the .NET String.Format method. It allows you to do very precise formatting: