Don't worry about how the Oracle Certified Professional (OCP) Java SE 7 Programmer II Certification can grill you on overriding methods in Java.

In this article, excerpted from OCP Java SE 7 Programmer II Certification Guide, I'll cover overriding methods and virtual method invocation, including the tricks and traps that you might see on the exam. 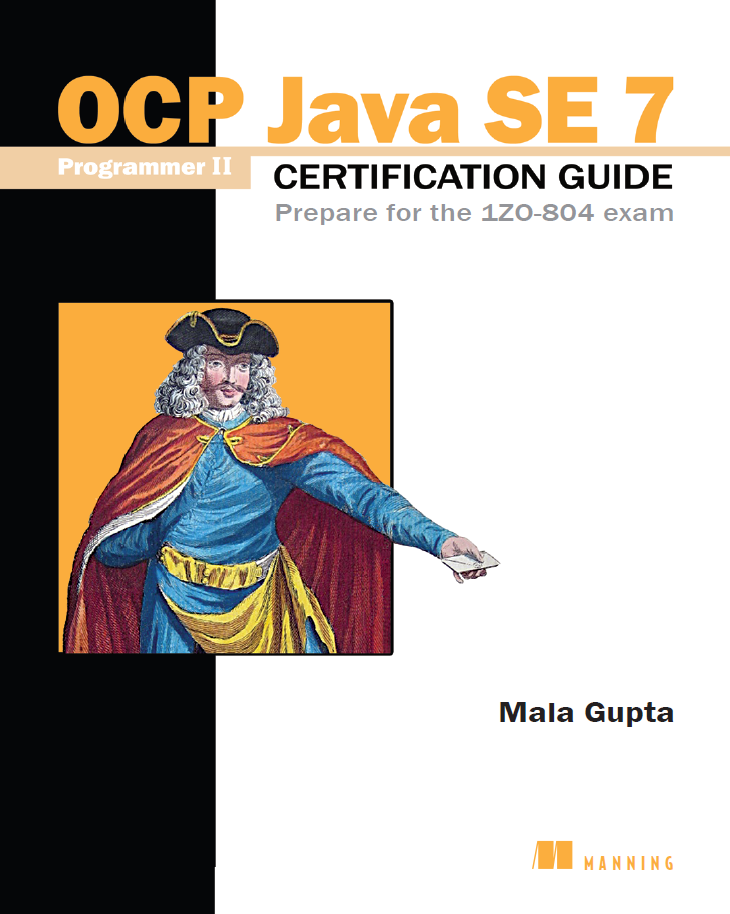 Do you celebrate a festival or an event in exactly the same manner as celebrated by your parents? Or have your modified it? Perhaps you celebrate the same festivals and events, but in your own unique manner. In a similar manner, classes can inherit behavior from other classes. But they can redefine the behavior that they inherit — this is also referred to as method overriding.

Method overriding is an object-oriented programming (OOP) language feature that enables a derived class to define a specific implementation of an existing base class method to extend its own behavior. A derived class can override an instancemethod defined in a base class by defining an instance method with the same method signature or method name and number and types of method parameters. Overridden methods are also synonymous with polymorphic methods. The static methods of a base can’t be overridden, but they can be hidden by defining methods with the same signature in the derived class.

A method that can be overridden by a derived class is called a virtual method. But beware: Java has always shied away from using the term virtual methods and you will not find a mention of this term in Java’s vocabulary. This term is used in other OO languages like C and C++. Virtual method invocation is the invocation of the correct overridden method, which is based on the type of the object referred to by an object reference and not by the object reference itself. It’s determined at runtime, not at compilation time.

In the same way we inherit our parents’ behaviors but redefine some of the inherited behavior to suit our own needs, a derived class can inherit the behavior and properties of its base class but still be different in its own manner — by defining new variables and methods. A derived class can also choose to define a different course of action for its base class method by overriding it. Here’s an example of class Book, which defines a method issueBook() that accepts days as a method parameter:

The code at (#1) uses the annotation @Override, which notifies the compiler that this method overrides a base class method. Though optional, this annotation can come in very handy if you try to override a method incorrectly. (#2) defines the issueBook() method with the same name and method parameters as defined in class Book. (#3) calls the issueBook() method defined in class Book, however, it isn’t mandatory to do so. It depends on whether the derived class wants to execute the same code as defined by the base class.

Note: Whenever you intend to override methods in a derived class, use the annotation @Override. It will warn you if a method can’t be overridden or if you’re actually overloading a method rather than overriding it.

The following example can be used to test the preceding code:

Figure 1 represents the compilation and execution process of class BookExample, as Step 1 and Step 2:

Step 1: The compile time uses the reference type for the method check.

Step 2: The runtime uses the instance type for the method invocation. 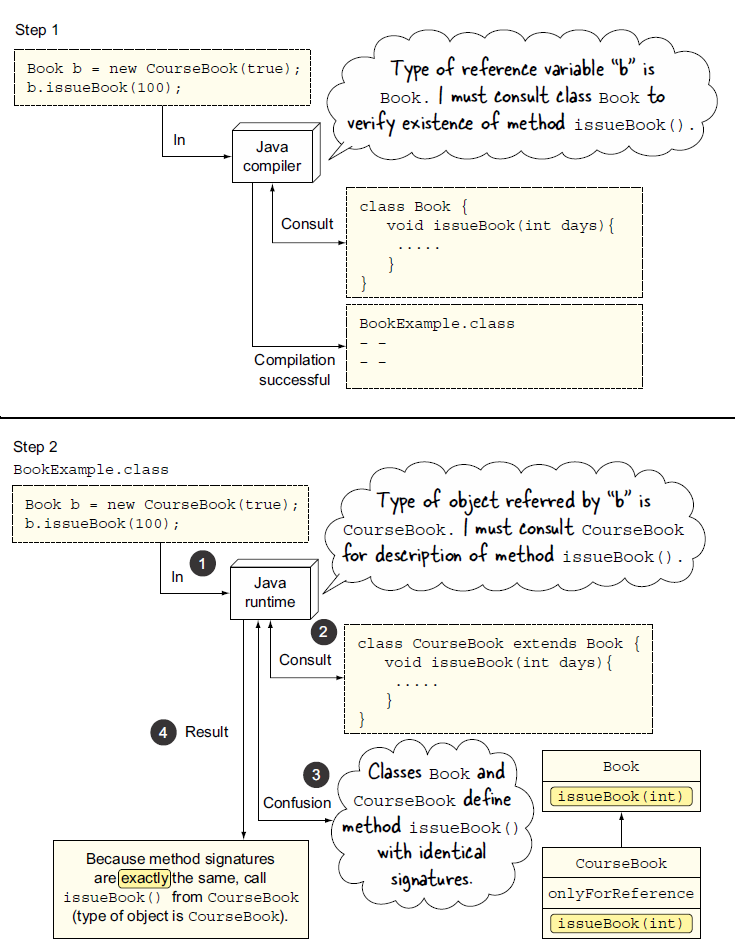 Now let’s cover how to correctly override a base class method in a derived class.

Let’s start with an example of the overridden method review, as follows:

Figure 2 shows the components of a method declaration: access modifiers, nonaccess modifiers, return type, method name, parameter list, and a list of exceptions that can be thrown (method declaration isn’t the same as method signature). The figure also compares the review method defined in base class Book, with the overridden method review() defined in class CourseBook with respect to these identified parts.

Figure 2 Comparing parts of a method declaration for a base class method and overridden method.

Table 1: Comparison of method components and their acceptable values for an overriding method

Chapter 6 includes a detailed explanation on overridden and overriding methods that throw exceptions. Let’s walk through a couple of invalid combinations that are important and very likely to be on the exam.

Note: Though a best practice, I’ve deliberately not preceded the definition of the overridden methods with the annotation @Override because you might not see it on the exam.

A derived class can assign the same or more access but not a weaker access to the overriding method in the derived class:

When the overriding method returns a subclass of the return type of the overridden method, it’s known as a covariant return type. To override a method, the parameter list of the methods in the base and derived classes must be exactly same. It you try to use covariant types in the argument list, you’ll end up overloading the methods and not overriding them. For example:

Exam Tip: It’s the reference variable type that dictates which overloaded method will be chosen. This choice is made at compilation time.

An overriding method must either declare to throw no exception, the same exception, or a subtype of the exception declared to be thrown by the base class method, or else it will fail to compile. This rule, however, doesn’t apply to error classes or runtime exceptions. For example:

Exam Tip: An overriding method can declare to throw any RuntimeException or Error, even if the overridden method doesn’t.

Can You Override All Methods From the Base Class or Invoke Them Virtually?

The simple answer is no. You can override only the following methods from the base class:

Methods Accessible to a Base Class

Only Nonstatic Methods Can Be Overridden

It’s easy to get confused with method overriding, overloading, and hiding. Figure 4 identifies these methods in classes Book and CourseBook. On the left are the class definitions, and on the right their UML representations. 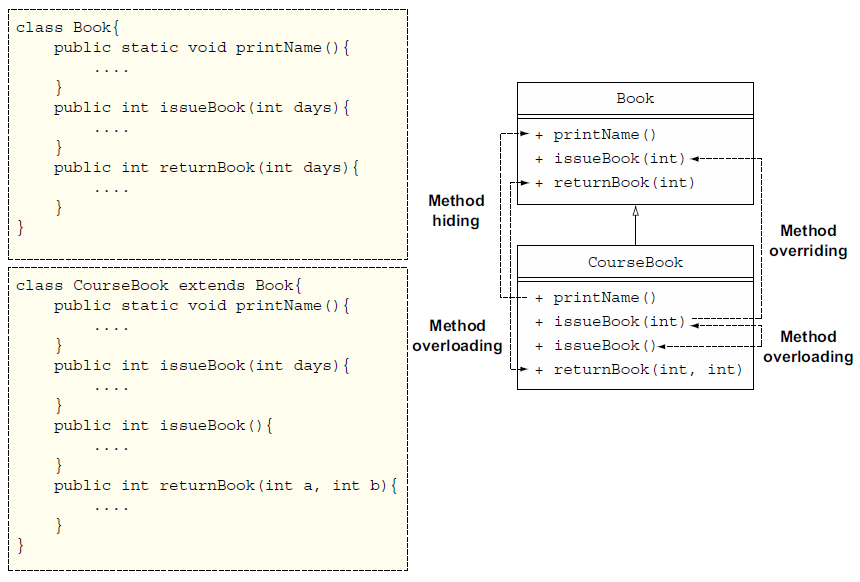 Figure 4Identifying method overriding, method overloading, and method hiding in a base and derived class.

A Quick Note on the "Twist in the Tale" Exercise

Each chapter (from which this article is exceprted) includes a few Twist in the Tale exercises. For these exercises, I’ve tried to use modified code from the examples already covered in a chapter, and the "Twist in the Tale" title refers to modified or tweaked code. These exercises highlight how even small code modifications can change the behavior of your code. They should encourage you to carefully examine all of the code on the exam.

My main reason for including these exercises is that on the real exam you may be asked to answer more than one question that seems exactly the same as another. But upon closer inspection, you’ll realize that these questions differ slightly, and that these differences change the behavior of the code and the correct answer option.

Twist in the Tale

Let’s modify the code of classes Book and CourseBook and define multiple combinations of the static and nonstatic method print() in both these classes as follows:

Your task is to first tag them with one of the options and then compile them on your system to see if they’re correct. On the actual exam, you’ll need to verify (without a compiler) if a code snippet compiles or not:

Can You Override Base Class Constructors or Invoke Them Virtually?

Exam Tip: Constructors can’t be overridden because a base class constructor isn’t inherited by a derived class.

Purpose: To distinguish between overloaded, overridden and hidden methods.

I wish Good Luck to you and hope you earn this certification with flying colors!