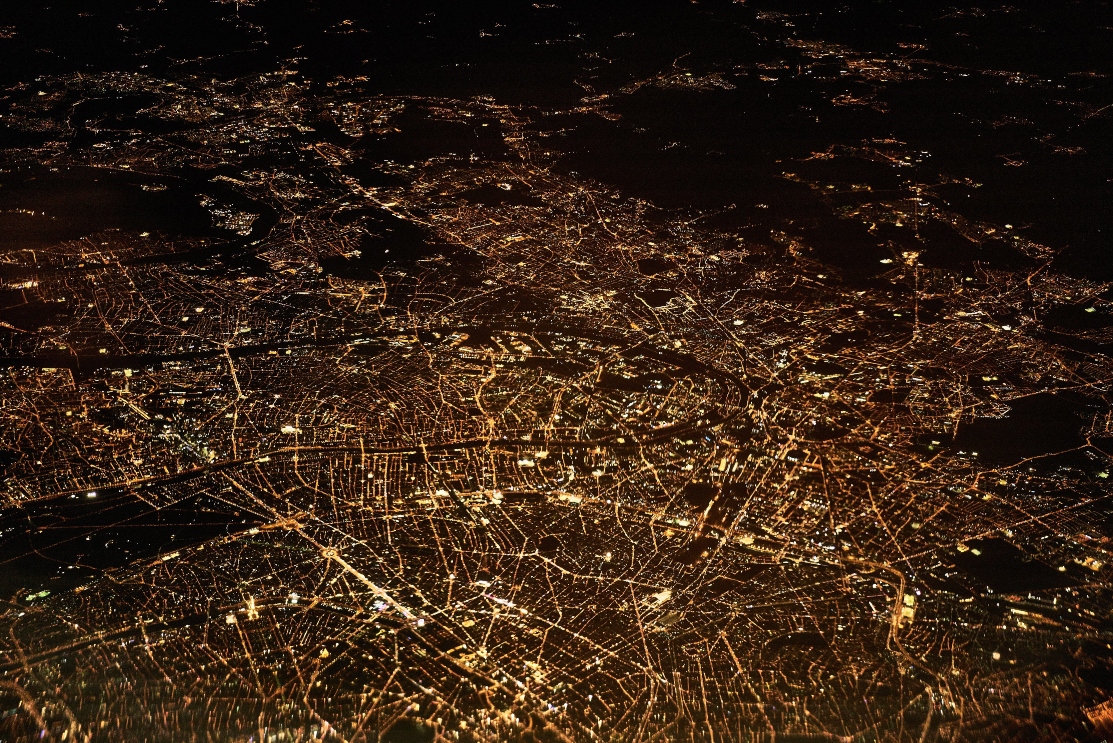 As Josh Wills once said,

“Data Scientist is a person who is better at statistics than any programmer and better at programming than any statistician.”

Math and Statistics for Data Science are essential because these disciples form the basic foundation of all the Machine Learning Algorithms. In fact, Mathematics is behind everything around us, from shapes, patterns, and colors, to the count of petals in a flower. Mathematics is embedded in each and every aspect of our lives.

Although having a good understanding of programming languages, Machine Learning algorithms and following a data-driven approach is necessary to become a Data Scientist, Data Science isn’t all about these fields. In this blog post, you will understand the importance of Math and Statistics for Data Science and how they can be used to build Machine Learning models.

Here’s a list of topics I’ll be covering in this Math and Statistics for Data Science blog:

You may also like: Big Data: Data Science and Advanced Analytics.

Statistics is a Mathematical Science pertaining to data collection, analysis, interpretation and presentation. 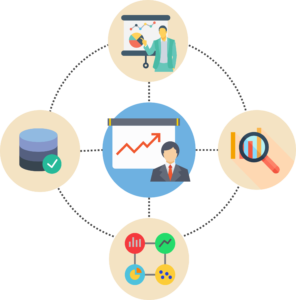 Statistics is used to process complex problems in the real world so that Data Scientists and Analysts can look for meaningful trends and changes in Data. In simple words, Statistics can be used to derive meaningful insights from data by performing mathematical computations on it.

Several Statistical functions, principles, and algorithms are implemented to analyze raw data, build a Statistical Model and infer or predict the result. 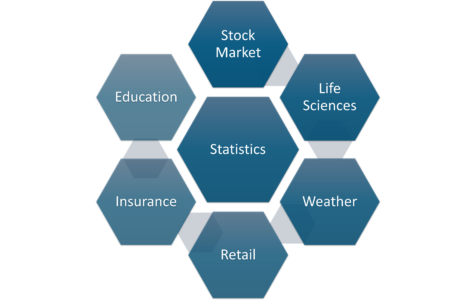 The field of Statistics has an influence over all domains of life, the Stock market, life sciences, weather, retail, insurance, and education are but to name a few.

Moving ahead. let’s discuss the basic terminologies in Statistics.

One should be aware of a few key statistical terminologies while dealing with Statistics for Data Science. I’ve discussed these terminologies below:

Before we move any further and discuss the categories of Statistics, let’s look at the types of analysis.

An analysis of any event can be done in one of two ways: 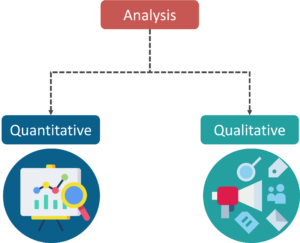 Types Of Analysis – Math And Statistics For Data Science

For example, if I want a purchase a coffee from Starbucks, it is available in Short, Tall and Grande. This is an example of Qualitative Analysis. But if a store sells 70 regular coffees a week, it is Quantitative Analysis because we have a number representing the coffees sold per week.

Although the purpose of both these analyses is to provide results, Quantitative analysis provides a clearer picture hence making it crucial in analytics.

There are two main categories in Statistics, namely:

Descriptive Statistics uses the data to provide descriptions of the population, either through numerical calculations or graphs or tables.

Inferential Statistics makes inferences and predictions about a population based on a sample of data taken from the population in question.

Inferential statistics generalizes a large data set and applies probability to arrive at a conclusion. It allows you to infer parameters of the population based on sample stats and build models on it.

So, if we consider the same example of finding the average height of students in a class, in Inferential Statistics, you will take a sample set of the class, which is basically a few people from the entire class. You already have had grouped the class into tall, average and short. In this method, you basically build a statistical model and expand it for the entire population in the class.

Now let’s focus our attention on Descriptive Statistics and see how it can be used to solve analytical problems.

When we try to represent data in the form of graphs, like histograms, line plots, etc. the data is represented based on some kind of central tendency. Central tendency measures like, mean, median, or measures of the spread, etc are used for statistical analysis. To better understand Statistics lets discuss the different measures in Statistics with the help of an example. 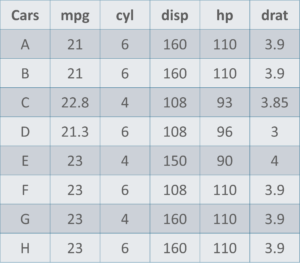 Here is a sample data set of cars containing the variables:

Before we move any further, let’s define the main Measures of the Center or Measures of Central tendency.

Measures Of The Center

Using descriptive Analysis, you can analyse each of the variables in the sample data set for mean, standard deviation, minimum and maximum.

Measures of the Spread

Just like the measure of center, we also have measures of the spread, which comprises of the following measures:

Now that we’ve seen the stats and math behind Descriptive analysis, let’s try to work it out in R.

There are n number of reasons why the world is moving to R. A couple of them are enlisted below:

Now let’s move ahead and implement Descriptive Statistics in R.

It’s always best to perform practical implementation to better understand a concept. In this section, we’ll be executing a small demo that will show you how to calculate the Mean, Median, Mode, Variance, Standard Deviation and how to study the variables by plotting a histogram. This is quite a simple demo but it also forms the foundation that every Machine Learning algorithm is built upon.

Step 2: Calculate Mean for the data

Step 3: Calculate the Median for the data

Step 4: Calculate Mode for the data

The Histogram is used to display the frequency of data points: 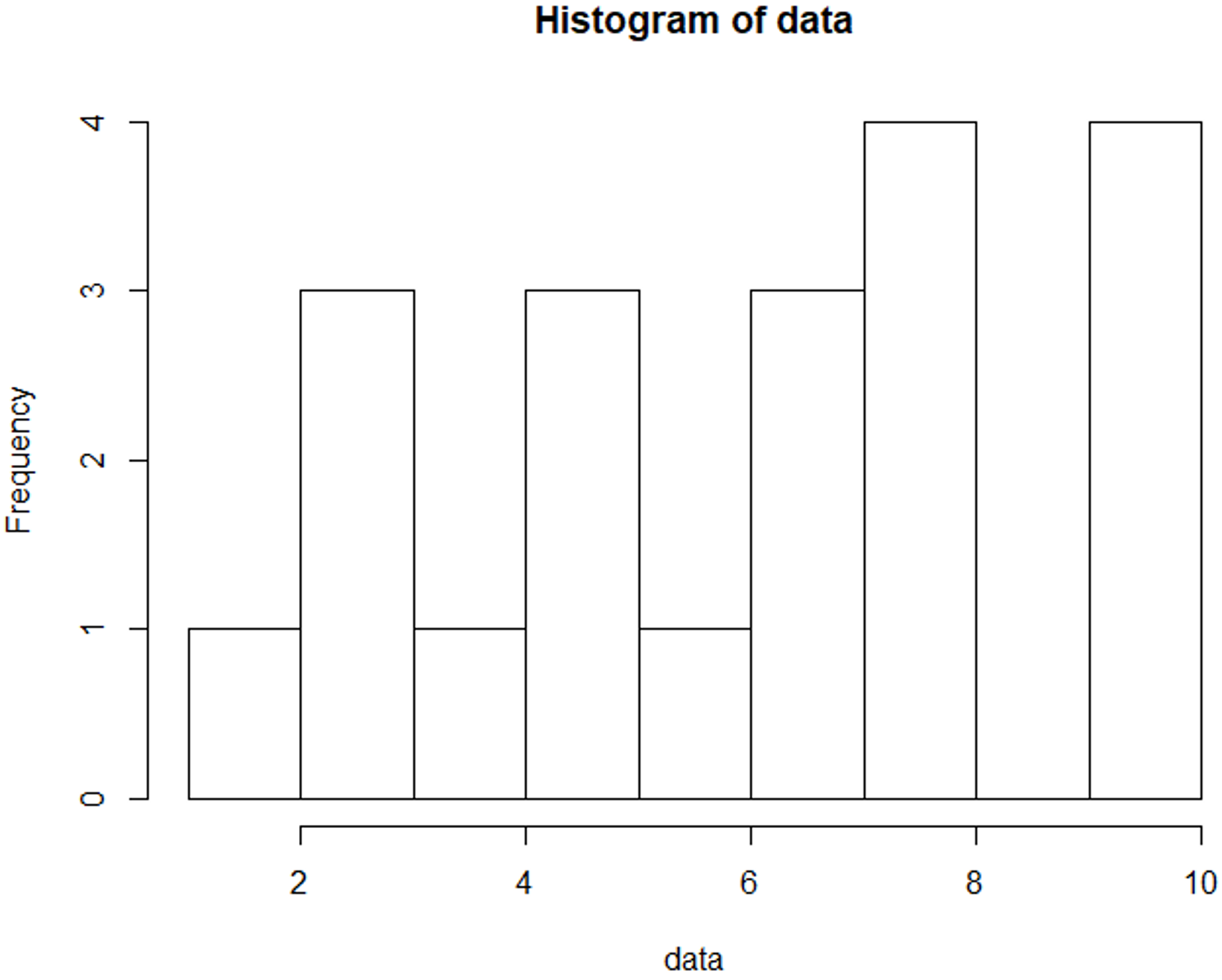 To under the characteristics of a general population, we take a random sample and analyze the properties of the sample. We test whether or not the identified conclusion represents the population accurately and finally we interpret their results. Whether or not to accept the hypothesis depends upon the percentage value that we get from the hypothesis.

To better understand this, let’s look at an example.

Consider four boys, Nick, John, Bob and Harry who were caught bunking a class. They were asked to stay back at school and clean their classroom as a punishment.

So, John decided that the four of them would take turns to clean their classroom. He came up with a plan of writing each of their names on chits and putting them in a bowl. Every day they had to pick up a name from the bowl and that person must clean the class.

Now it has been three days and everybody’s name has come up, except John’s! Assuming that this event is completely random and free of bias, what is the probability of John not cheating?

Let’s begin by calculating the probability of John not being picked for a day:

The probability here is 75%, which is fairly high. Now, if John is not picked for three days in a row, the probability drops down to 42%

Now, let’s consider a situation where John is not picked for 12 days in a row! The probability drops down to 3.2%. Thus, the probability of John cheating becomes fairly high.

The probability and hypothesis testing give rise to two important concepts, namely:

Therefore, in our example, if the probability of an event occurring is less than 5%, then it is a biased event, hence it approves the alternate hypothesis.

We’ll begin by downloading the gapminder package and loading it into our R environment:

Now, let’s take a look at our data set by using the View() function in R:

Here’s a quick look at our data set: 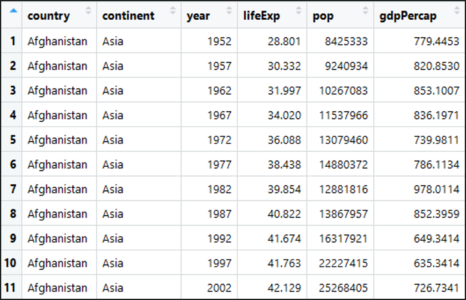 The next step is to load the infamous dplyr package provided by R. We’re specifically looking to use the pipe (%>%) operator in the dplyr package. For those of you who don’t know what the pipe operator does, it basically allows you to pipe your data from the left-hand side into the data at the right-hand side of the pipe. It’s quite self-explanatory.

Our next step is to compare the life expectancy of two places (Ireland and South Africa) and perform the t-test to check if the comparison follows a Null Hypothesis or an Alternate Hypothesis.

So, after you apply the t-test to the data frame (df1), and compare the life expectancy, you can see the below results:

Notice the mean in group Ireland and in South Africa, you can see that life expectancy almost differs by a scale of 20. Now we need to check if this difference in the value of life expectancy in South Africa and Ireland is actually valid and not just by pure chance. For this reason, the t-test is carried out.

Pay special attention to the p-value also known as the probability value. p-value is a very important measurement when it comes to ensuring the significance of a model. A model is said to be statistically significant only when the p-value is less than the pre-determined statistical significance level, which is ideally 0.05. As you can see from the output, the p value is 4.466e-09 which is an extremely small value.

In the summary of the model, notice another important parameter called the t-value. A larger t-value suggests that the alternate hypothesis is true and that the difference in life expectancy is not equal to zero by pure luck. Hence in our case, the null hypothesis is disapproved. 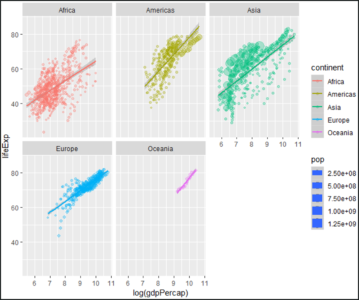 In the above illustration, you can almost see a linear variance in the life expectancy for each continent with respect to the GDP per capita. This also shows how well the R language can be used for Statistical Analysis.

With this, we come to the end of this blog.

PyDev of the Week: Neil Muller