With the exciting news about Apple's new iPad Pro and the new Core Image filters in iOS 9 (some powered by Metal Performance Shaders!), now is a perfect time for me to start working on version 3 of my node based image processing application, Nodality.

I started writing the Swift version of Nodality when I was a little wet behind the ears and, to be frank, to get it working nicely under Swift 2 it could benefit from a total rewrite. The node based user interface part of the code is very tightly coupled with the image filtering logic and would be impossible to reuse for another type of application.

So, with that in mind, I've rebuilt that code to totally separate the display logic from the image handling and opened it up to accept injectable renderers. This means my node based UI component, ShinpuruNodeUI, can be easily reused in another type of application. For example, it could render database schemas, business process workflows or even audio devices and filters.

This post looks at how you could implement ShinpuruNodeUI in your own app rather than discussing the internals of the component itself. If you have any questions about the actual component, please feel free to comment on this post or reach out to me via Twitter where I am @FlexMonkey.

The project comes bundled with a simple demonstration calculator app which has been my default "getting started" app for node based user interfaces since I first started coding them back in 2008! The calculator code illustrates how you could implement your own business logic in a node based application.

The main user gestures are:

I've played with a more traditional drag gesture to create relationships, but found this "relationship creation mode" pattern worked well for touch devices. In this release, there's nothing preventing users from creating circular relationships which cause the app to crash -  there's a fix for this pending.

ShinpuruNodeUI is manually installed and requires you to copy the following files into your project:

This is bound to change as the component evolves and I'll keep the read-me file updated.

Set up is pretty simple. Instantiate an instance:

Add it as a subview:

For ShinpuruNodeUI to do anything interesting, it needs a nodeDelegate which is of type SNDelegate. The nodeDelegateis responsible for everything from acting as a datasource to providing renderers and includes these methods:

In my demo app, its the view controller that acts as the nodeDelegate.

So, although ShinpuruNodeUI renders your nodes and their relationships and reports back user gestures, there's still a fair amount that the host application is responsible for. Luckily, my demo app includes basic implementations of everything required to get you up and running. 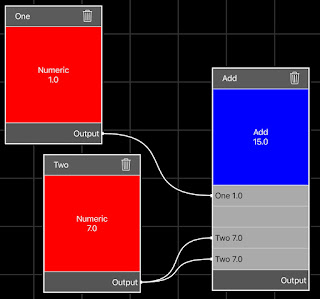 Node widgets requires three different types of renderers, defined by the SNDelegate above. My demo project includes basic implementations of all three in the DemoRenderers file.

The three renderers should sub class SNItemRenderer, SNOutputRowRenderer, SNInputRowRenderer and, at the very least,  implement a reload() method and override intrinsicContentSize(). reload() is invoked when ShinpuruNodeUI needs the renderer to update itself (in the case of the demo app, this is generally just updating the text property of a label.

My demo calculator app contains a single struct, DemoModel, which manages the logic for updating its nodes when values or inter-node relationships are changed. The view controller mediates between an instance of DemoModel and an instance of ShinpuruNodeUI.

When a numeric (red) node is selected and its value changed by the slider in the bottom toolbar, the view controller's sliderChangeHandler() is invoked. This method double checks that ShinpuruNodeUI has a selected node, updates that node's value and then calls theDemoModel's updateDescendantNodes() method. updateDescendantNodes() returns an array of all the nodes affected by this update which are then passed back to ShinpuruNodeUI to update the user interface:

Similarly, when a blue operator node (i.e. add, subtract, multiply or divide) is selected and the operator is changed, the selected node's type is changed and updateDescendantNodes() is executed followed by reloading the affected nodes:

ShinpuruNodeUI can invoke delegate methods that will require DemoModel to update its nodes - specifically, deleting a node or changing a relationship. To that end, both DemoModel's deleteNode() and relationshipToggledInView() return an array of affected nodes which are passed back to ShinpuruNodeUI:

The complete project is available at my GitHub repository here. Keep an eye out on my blog or on Twitter for an updates!