Lately, at Codesai, we've been studying and applying the concept of connascence in our code and have provided an introductory talk about it.

The concept of connascence is not new at all. Meilir Page-Jones introduced it in 1992 in his paper Comparing Techniques by Means of Encapsulation and Connascence. Later, he elaborated more on the idea in his What Every Programmer Should Know About Object-Oriented Design book from 1995, and its a more modern version of (same book but using UML) Fundamentals of Object-Oriented Design in UML from 1999.

Ten years later, Jim Weirich brought connascence back from oblivion in a series of talks: Grand Unified Theory of Software Design, The Building Blocks of Modularity, and Connascence Examined. As we'll see later in this post, he did not only bring connascence back to life but also improved its exposition.

More recently, Kevin Rutherford wrote a very interesting series of posts, in which he talked about using connascence as a guide to choose the most effective refactoring and how connascence can be a more objective and useful tool than code to identify design problems  [1].

The concept of connascence appeared in the early nineties when object-oriented programming was starting its path to becoming the dominant programming paradigm, as a general way to evaluate design decisions in an object-oriented design. In the previous dominant paradigm, structured programming, fan-out, coupling, and cohesion were fundamental design criteria used to evaluate design decisions. To make clear what Page-Jones understood by these terms, let's see the definitions he used:

Fan-out is a measure of the number of references to other procedures by lines of code within a given procedure.

Coupling is a measure of the number and strength of connections between procedures.

Cohesion is a measure of the "single-mindedness" of the lines of code within a given procedure in meeting the purpose of that procedure.

According to Page-Jones, this set of design criteria governs the interactions between the levels of encapsulation that are present in structured programming, including level-1 encapsulation (the subroutine) and level-0 (lines of code), as can be seen in the following table from the Fundamentals of Object-Oriented Design in UML.

Two of these new design criteria are class cohesion and class coupling, which are an analog to the structured programing's procedure cohesion and procedure coupling, but, as you can see, there are other ones in the table that don't even have a name.

Connascence is meant to be a deeper criterion behind all of them, and, as such, it is a general way to evaluate design decisions in an object-oriented design. This is the formal definition of connascence by Page-Jones:

Connascence between two software elements A and B means either:

1. You can postulate some change to A that would require B to be changed (or at least carefully checked) in order to preserve overall correctness, or

2. You can postulate some change that would require both A and B to be changed together in order to preserve overall correctness.

In other words, there is connascence between two software elements when they must change together for the software to keep working correctly.

We can see how these new design criteria can be used for any of the interdependencies among encapsulation levels present in an object-oriented design. Moreover, it can also be used for higher levels of encapsulation (packages, modules, components, bounded contexts, etc). In fact, according to Page-Jones, connascence is applicable to any design paradigm with partitioning, encapsulation, and visibility rules [2].

Page-Jones distinguishes several forms (or types) of connascence. Connascence can be static when it can be assessed from the lexical structure of the code or dynamic when it depends on the execution patterns of the code at run-time.

There are several types of static connascence:

There are also several types of dynamic connascence:

Another important form of connascence is contranascence, which exists when elements are required to differ from each other (e.g., have different names in the same namespace or be in different namespaces, etc). Contranascence may also be either static or a dynamic.

Page-Jones talks about two important properties of connascence that helps measure its impact on maintainability:

A nice way to reformulate this is using what is called the three axes of connascence [3]:

The following figure by Kevin Rutherford shows the different forms of connascence that we saw before but sorted by descending strength. 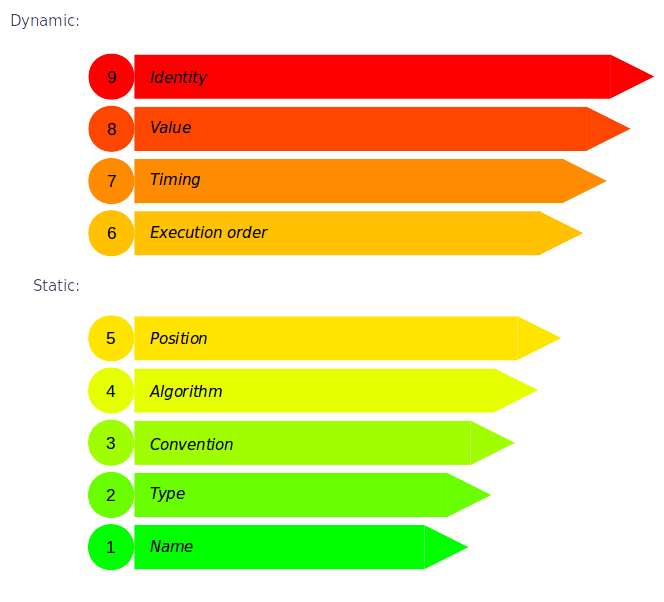 Connascence is simpler than other design principles, such as the SOLID principles, Law of Demeter, etc. In fact, it can be used to see those principles in a different light, meaning they can be seen using more fundamental principles like the ones in the first chapter of Kent Beck's Implementation Patterns book.

We use code smells, which are a collection of code quality antipatterns, to guide our refactorings and improve our design, but, according to Kevin Rutherford, they are not the ideal tool for this task [4]. Sometimes, connascence might be a better metric for coupling than the somewhat-fuzzy concept of code smells.

"this allows us to be much more specific about the problems we're dealing with, which makes it it easier to reason about the types of refactorings that can be used to weaken the connascence between components."

How Should We Apply Connascence?

1. Minimize overall connascence by breaking the system into encapsulated elements.

3. Maximize the connascence within encapsulation boundaries.

According to Kevin Rutherford, the first two points conforms to what he calls the Page-Jones refactoring algorithm  [6].

These guidelines generalize the structured design ideals of low coupling and high cohesion is applicable to object-oriented designs or, as it was said before, to any other paradigm with partitioning, encapsulation, and visibility rules.

This might still be a little subjective, so some of us prefer a more concrete way to apply connascence using Jim Weirich's two basic principles:

[3] See the webinar Connascence How to Measure Coupling by Nick Hodges.

[5] The concepts of coupling and cohesion can be hard to grasp — just see this recorded debate about them, Understanding Coupling and Cohesion.

[7] Even though he used the word degree, he was actually talking about strength.

Published at DZone with permission of Manuel Rivero. See the original article here.