A decision that does not go our way is not an attack on our identity, and yet when others disagree with us or disregard our opinion, we take it personally.

The stronger our belief system, the more difficult it is for us to look beyond our own perspective and treat other people's ideas worthy of consideration. Being stuck in right vs wrong can cause us to feel emotionally stressed out, prevent us from expressing our own ideas with the right frame of mind, and ignore what others have to say.

Instead of the conflict transpiring into a healthy debate to make a decision which is in the larger interest of the company, the difference of opinion takes on a personal agenda in which one side must lose for the other to win.

Eventually, when the decision does land based on the power equation or some other decision-making framework employed by the organization and it's not what we anticipated, it ends up hurting our emotions.

What should we do then? Just agree to disagree - agreeing to the fact that we disagree with the decision.

Why Agree to Disagree Doesn't Work 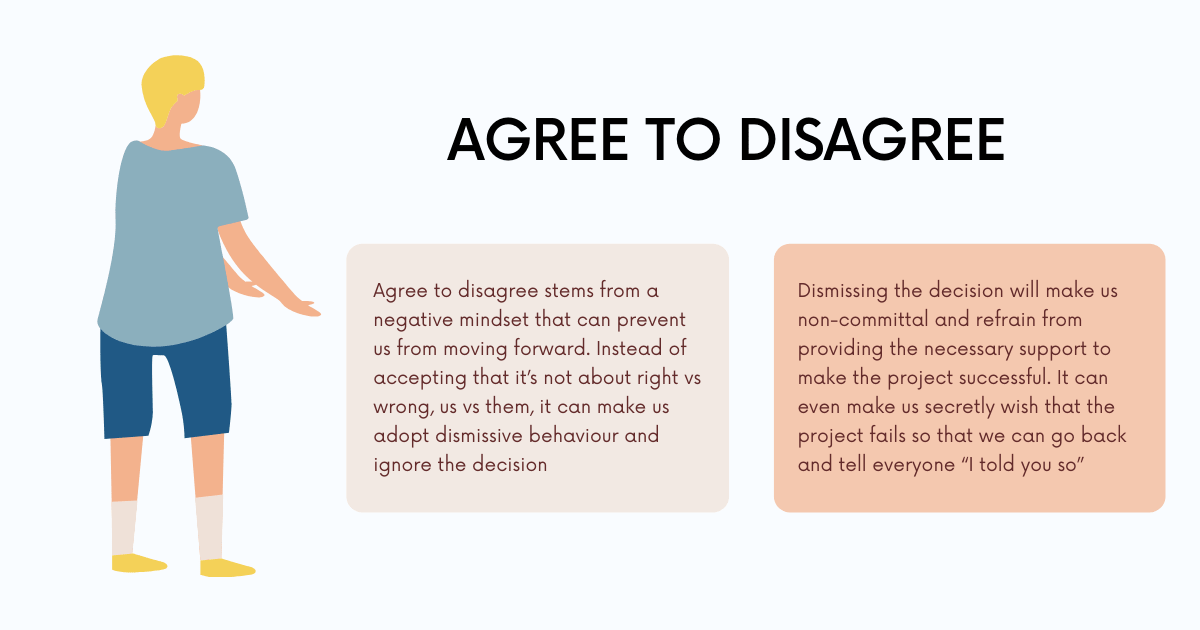 Instead of accepting that it's not about right vs wrong, us vs them, agree to disagree can make us adopt a dismissive behavior and ignore the decision.

Dismissing the decision will make us non-committal and refrain from providing the necessary support to make the project successful. It can even make us secretly wish that the project fails so that we can go back and tell everyone "I told you so."

From Stephen R. Covey, The 7 Habits of Highly Effective People -

"Each of us tends to think we see things as they are, that we are objective. But this is not the case. We see the world, not as it is, but as we are-or, as we are conditioned to see it. When we open our mouths to describe what we see, we in effect describe ourselves, our perceptions, our paradigms. When other people disagree with us, we immediately think something is wrong with them. But, as the demonstration shows, sincere, clear headed people see things differently, each looking through the unique lens of experience"

A difference of opinion is useful to seek diverse viewpoints, evaluate solutions from different points of view and make unbiased decisions. But, when it ends with the "agree to disagree" mindset, it sabotages the purpose of a group to come together and challenge each other while remaining committed to supporting each other.

Why Disagree and Commit Instead 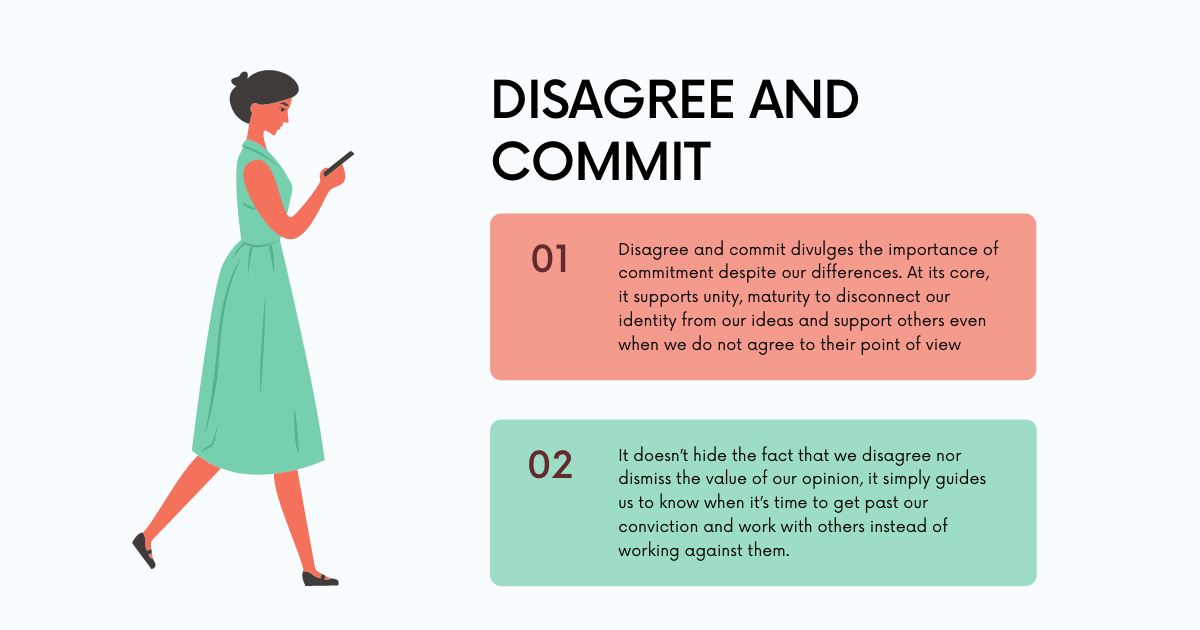 It doesn't hide the fact that we disagree nor dismiss the value of our opinion, it simply guides us to know when it's time to get past our conviction and work with others instead of working against them.

"You can value the difference in other people. When someone disagrees with you, you can say, "Good! You see it differently." You don't have to agree with them; you can simply affirm them. And you can seek to understand"

When disagreements reach a point of no consensus, the leader of the group typically takes a final call on the direction to take. Before devising any strategy and tactics, it's important that the members of the group disagree and commit to this decision instead of agree to disagree.

"I know that we disagree on this idea, but can you commit to supporting it. We cannot move forward without a commitment from all of you to make it successful"

How to Disagree and Commit the Right Way

Disagreements are not only useful, they are essential to the long term success of any organization. Yet, the thought of a disagreement can creep us out, make us conform to others even when every cell in our body is shouting to speak up.

It can be a personal hesitation or a cultural nuance that can drive us to avoid disagreements - nod our head to an idea that we do not buy-in, keep our thoughts to ourselves with the worry that others might dislike it or do not speak up with the fear of rejection or reprisal.

Disagreements managed right can help us build an independent viewpoint, expand our circle of competence by hearing diverse opinions, reflect on our own thinking and approach conflict with a growth mindset as opposed to an attack on our intelligence or abilities.

Without an opportunity to explore and express our thoughts, can we really commit wholeheartedly and support conflicting opinions. How can we disagree and commit in a productive manner?

1. Separate Your Idea From Your Identity

You may have a great idea or a really bad one. The only way to know its worth is to seek honest feedback from others and that involves being able to take in criticism.

If you are too connected to your ideas and consider it a part of your identity, then even a slight hint of objection can shatter you to a thousand pieces and you can lose the opportunity to objectively consider a different point of view.

Catmull, an American computer scientist who was a co-founder of Pixar and president of Walt Disney Animation Studios describes in Creativity, Inc "You are not your idea, and if you identify too closely with your ideas, you will take offense when they are challenged"

Before disagreeing, take a moment and tell yourself

2. Start With Your Intent

If you do not state your intent, people will create their own stories that fit their belief system. Their mind will not shut up without building up a conceivable notion that explains your behavior "he/she thinks like this because....."

Disagreements in particular may lead to interpretations that are far from the reality of your situation and your intent.

So, before you disagree, ask yourself

With enough clarity about the purpose of your disagreement, start by stating your intent first.

When entering a conflict, it's easy to ignore the other side of the argument and stick to what you know. Confirmation bias can also make you selectively gather data to fit your beliefs as opposed to using opposing views to update your mental models.

Instead of engaging in finding a common solution, it becomes a battle of self-righteousness "I am right, you are wrong"

Listening intently to the other person without judgment is the first step to commitment. It does not mean that you agree to their viewpoint.

In the end, the discussion may lead to a decision you do not agree with and that should be a sign to shift gears.

Be content in the knowledge that you were true to yourself by speaking up, listening to diverse viewpoints and you did your best to help make the right decision.

Before offering any commitment, it's important that you clarify your understanding on the final decision

Respect the decision instead of being in contempt with it. It's time to put on your commitment hat.

5. State You Disagree and Commit

Disagree and commit reflects the mindset of a team over an individual, maturity to do what's in the best interest of the group and sign of a leader who can rise to difficult situations by embracing the new reality.

Instead of simply nodding in to show a sign of support, explicitly state what do you commit to doing:

Instead of waiting for your thinking to align with the new reality and trigger the right action, act first. Your action will slowly shift your belief system.

Don't just agree to disagree, shift to disagree and commit since that's the hallmark of great leadership. What do you think?