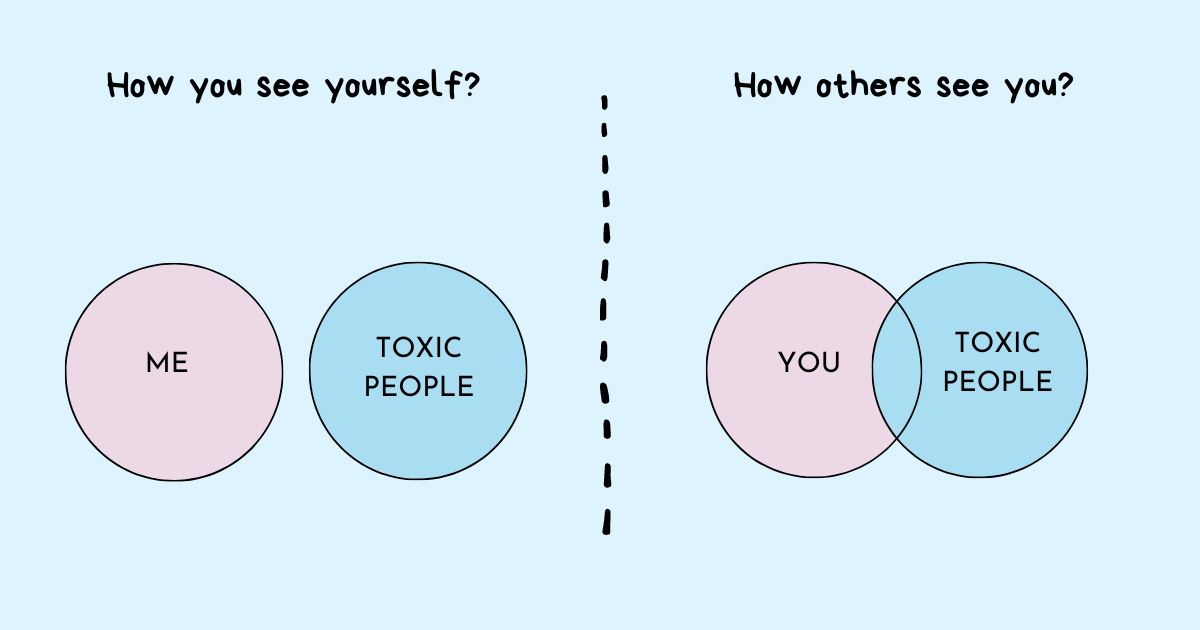 Some of the most toxic managers I have worked with had no clue they were contributing to a toxic work environment. Otherwise pleasant to talk to, these managers seemed to genuinely care about their people. However, what appeared on the outside was not in tune with what went inside their teams. Their good intentions didn’t always translate into the right action.

Their behavior was rooted in flawed assumptions about what contributes to toxicity.

When thinking about a toxic work environment, most of these obvious examples come to mind:

Looking through this extreme lens of toxicity makes most managers discard the notion that they could possibly be also contributing to one “Thank God! I am not on this list. Phew!” While these toxic behaviors might be the ones getting the most attention, there are other subtle behaviours, things that managers do or don’t do that also contribute to toxicity.

These unhelpful behaviors may not get as much attention since they don’t necessarily drive people crazy or be the reason for extreme stress at work. Nevertheless, they have an impact on employees' well-being.

“The talented employee may join a company because of its charismatic leaders, its generous benefits, and its world-class training programs, but how long that employee stays and how productive he is while he is there is determined by his relationship with his immediate supervisor,” writes Marcus Buckingham in First, Break All the Rules.

Disgruntled employees cost companies billions of dollars each year. You don’t want to be the one contributing to this cost, especially if you believe you aren’t someone who engages in toxic behavior.

So, even if you are a great manager who really cares about your employees, open yourself to the idea that your actions might be unintentionally contributing to a toxic work environment. Being self-aware and showing a willingness to accept reality can help you identify the role you play in supporting the toxic culture, even if in small ways and build strategies to combat it.

Your actions might even encourage others to prevent toxic culture in your company from taking hold.

4 Ways You Are Contributing to a Toxic Work Environment

1. Fail To Look Beyond Results

A good part of a manager's job involves moving the organization forward by driving results. What happens though when the manager is so blinded by outcomes that she fails to look at the behaviors that produced those outcomes?

Everyone likes to have people on the team who have an uncanny ability to produce outstanding work, but what if your high performers aren’t easy to get along with and exhibit behaviours that annoy others. What if they are the source of toxicity in the team?

They might be easily agitated when people make mistakes, expect others to work at their pace, pass sarcastic remarks, challenge their intelligence, belittle their skills, or demean them when things don’t work out the way they expected.

“Sometimes really talented people have heard for so long how great they are, they begin to feel they really are better than everybody else. They might smirk at ideas they find unintelligent, roll their eyes when people are inarticulate, and insult those they feel are less gifted than they are. In other words, these people are jerks. Many may think, “This guy is so brilliant, we can’t afford to lose him.” But it doesn’t matter how brilliant your jerk is. The cost of jerkiness to effective teamwork is too high. Jerks are likely to rip your organization apart from the inside”, says Reed Hastings in No Rules Rules.

As a manager, you may not demonstrate bad behavior yourself, but you contribute to the toxic work environment by enabling such people who produce great results at the cost of making others feel bad. In other words, choosing not to do anything is a choice to support the behavior. When you do nothing to deal with the problem employees, you convey the message “Such behavior is acceptable and anybody can get away with it.”

Depending on your involvement with the team, you might be a:

What should you do as a manager?

Take this advice from Robert Sutton. He writes in Good Boss, Bad Boss “Negative interactions (and the bad apples who provoke them) pack such a wallop in close relationships because they are so distracting, emotionally draining, and deflating. When a group does interdependent work, rotten apples drag down and infect everyone else. Unfortunately, grumpiness, nastiness, laziness, and stupidity are remarkably contagious. The best bosses do more than charge up people and recruit and breed energizers. They eliminate the negative because even a few bad apples and destructive acts can undermine many good people and constructive acts.”

Too much focus on outcomes can also make you ignore poor performers in the team with the attitude that they don’t deserve your attention. It impacts the morale in the team as others feel dragged down to make up for their slack and find a lack of accountability as a sign that their manager doesn’t care about fairness or building excellence in the team.

The overall damage done to the team by toxic high performers or tolerating poor performance is highly expensive. It stifles people’s learning and growth and soon becomes a reason for employee turnover.

When interviewing for a startup, the hiring manager once told me “I don’t have a life. But I expect you to have one. You don’t need to work 24x7 just like me.” Looking back, I know that he really cared about his people and always had their best intentions at heart. But, that wasn’t enough.

His passion for his organization was infectious. His actions carried far more weight than did his words. When he said “go home” while staying back to solve the problem himself, it actually conveyed the message “I want you to stay back and solve this.” When he came to the office to interview candidates over the weekend, not once or twice, but almost every other week, I sort of assumed it’s part of my job too. When he sent emails at odd hours, while not expecting me to reply at those hours, yet sending another one in the morning asking me about what I did to solve them, I had trouble sleeping through the night.

Being ambitious and seeing him work like a crazy person, the line between right and wrong started to blur. As much as I tried to have a balanced life, I found myself constantly conflicted between staying back at work and leaving for home to be with my family.

His toxicity to have no balance whatsoever got the better of me. I could have said “no” multiple times, but I kept saying “yes.” Now, I possibly cannot blame him for having this effect on me. Yet, this example serves as a reminder that people, especially those in positions of power and authority do not realize the impact of their behavior and actions on others.

While they may sound really cool when they ask others to have a balanced life, no one in their organization is getting it unless they do it first. They cannot work one way and expect their employees to act differently. Right or wrong, everyone emulates the attitudes and behaviors of their managers. Some like me do it for a short while only to realize that it isn’t serving them well and quit before it’s too late, while others get trapped in the toxicity too hard and too deep.

John Mark Green, an IT geek and writer once wrote, “Toxic people attach themselves like cinder blocks tied to your ankles, and then invite you for a swim in their poisoned waters.”

It may be time for you to do a reality check to see if you are one of those people.

3. Offer Too Much Protection

Work environments can be brutal especially when people lack respect for others' time and productivity. Too many meetings, conflicting requests, information overload can damage a team’s productivity. When employees have no time to sit down and focus for long durations, they really can’t produce any quality work.

Interruptions are destructive to productivity. The more a manager can absorb trivial and unnecessary interruptions, the better work their team can produce.

It’s natural for good managers in such environments to act as a shield for their people. Protecting them from getting overwhelmed by requests, blocking information that doesn’t concern them, and keeping them away from anything that might distract them from doing their work.

However, what starts as healthy protection often turns into toxic behaviour that’s destructive to a team’s growth. When managers don’t know where to draw the line, they tend to go overboard with it.

By not knowing how to separate healthy interactions from unhealthy ones, they block their people from getting the necessary exposure. Their team may acquire technical excellence but fail to learn other valuable skills like effective communication, conflict resolution, or delegation.

They contribute to a toxic work environment by acting as the mediator all the time while failing to empower people to make decisions on their own. On many occasions, they also fail to share information that’s valuable to get the work done.

This not only prevents the team from achieving excellence, it also has a negative effect on managers' own productivity. They spend more and more time shielding people while spending less on doing work that will move their teams forward.

Some managers encourage people to speak up, have healthy disagreements and even discuss new ideas within their teams, which makes them feel good about their manager but when it comes to making a choice, they stick with the status quo.

They lean towards what has always worked instead of betting on new initiatives with unknowns. Low tolerance for failures and being risk-averse prevents them from saying yes to challenging opportunities within their organization.

Steven Pressfield writes in The War of Art “Resistance is the most toxic force on the planet.” Managers contribute to a toxic work environment when they are inflexible to change and discourage others from learning and adapting to the change around them.