Why We Need Automated Deployments

Over the last decade, there has been a paradigm shift in the way applications are written, deployed, and managed. Businesses have adopted cloud-native as their strategy for dealing with applications. As a result, applications have shifted to a microservices architecture. The deployment platforms are now managed by clouds or Kubernetes.

With such changes, the load on an operations engineer increases manifold. The apps may be granular, but he must deploy and manage numerous ones as opposed to just one. Automating the task is the most effective technique to make it easier. If you decide to deploy your applications using Kubernetes, there will be more justifications for doing so. For each application that is to be deployed in Kubernetes, you need to write many manifest files. Again, each application contains numerous deployable components, such as a database, an API, a front end, a database access layer, and many others. For each component, there would be one or more manifest files. So for one microservice suite, one might end up deploying hundreds of Kubernetes manifest files. Each of these files has to be deployed in a particular sequence without fail. Otherwise, the deployment may become corrupt or fail.

So, what is needed is a tool that could do the following:

There are multiple tools available for accomplishing this. The most popular among them is Helm.

Helm is an open-source software that helps in installing, upgrading, rolling back, and uninstalling Kubernetes workloads in a Kubernetes cluster. Helm does it almost effortlessly. It is also called the package manager for Kubernetes. With Helm, complex Kubernetes deployments could be installed with utmost ease. A very large microservices suite could be installed, uninstalled, and managed with just a single command. Helm also supports running smoke tests before or after installation.

Just notice that the term "installation" is being used in place of "deployment." That is because Helm sees the deployments as applications being installed on a platform, just like any other package manager installs packages on a platform. For example, yum, and apt are popular package managers for Linux distributions, and they install packages.

To use Helm, we need to store our Kubernetes manifest files in a specific folder structure. This folder structure is treated as one package. Helm packages are called charts. Charts could be nested to help install multiple applications using a single folder structure. For convenience in managing the chart as well as several versions of the same chart, the folders may also be archived and stored in a repository.

Most businesses are now releasing their Kubernetes artifacts in the form of charts and uploading them to public CNCF artifact repositories. The charts could be stored locally in a file folder, in a local private chart repository, or in a public chart repository. Helm is capable of reading the charts stored on any of the three and is capable of pulling and installing them.

We should have some idea of how helm works. Before that, we will know a little about helm architecture and components. Then it will be easier to know how helm works.

Helm contains three key concepts with which we must become familiar.

As we know, a chart is a package that contains all necessary Kubernetes artifacts and a few Helm-specific files in a certain folder structure. All these files are necessary to install a Kubernetes application.

The config consists of one or more yaml files and contains necessary configuration information for deploying a Kubernetes application. These configurations are merged into the chart during helm operations.

A release is called the running instance of a chart. The chart is merged with the config, and that successfully installs an application as a release. One chart can have multiple releases.

Helm, up to version two, worked with a client-server model. However, with the most recent version, Helm 3, Helm works with a client + library model. Helm is written in the GO language. When we install Helm, we are installing both the Helm library and the client.

Helm client is the command line interface to work with the Kubernetes cluster. It reads the Rathercluster information from the ~/.kube/.config file and always points to the current cluster. Any operation the user has to invoke needs to be pushed through the Helm client.

When Helm Client issues a command, the library integrates the Kubernetes artifacts and configuration information and generates the final manifest files to be sent as a POST message to the KUBE API server.

Here we will list the most commonly used and powerful Helm commands. These commands are used by a Helm operator on an everyday basis.

In this section, we will look at the use case of deploying a Kubernetes application in a Kubernetes cluster. It will demonstrate how to retrieve a chart from a repository and deploy it on your cluster. We will also uninstall the application.

For this tutorial, we are assuming the user has basic knowledge of Kubernetes and Linux commands. We also assume that you have access to a Kubernetes cluster. If not, create one using Minikube or use Katakoda. For the tutorial, I am using Katakoda.

Helm could be installed very easily. All the steps are mentioned on the Helm documentation page. There are separate sections for different operating systems. Choose the section according to the OS you are using. Once Helm is installed successfully, test the version and proceed.

We will create a basic Helm chart using the “helm create” command. This command will create a fully functional Helm chart with all the necessary files and an appropriate folder structure. You will have a visual representation of a Helm chart. This chart will try to deploy an nginx application to the cluster with all required Kubernetes API objects like a deployment, service, configmap, etc. We will not install and then remove the chart.

Use the following two commands: 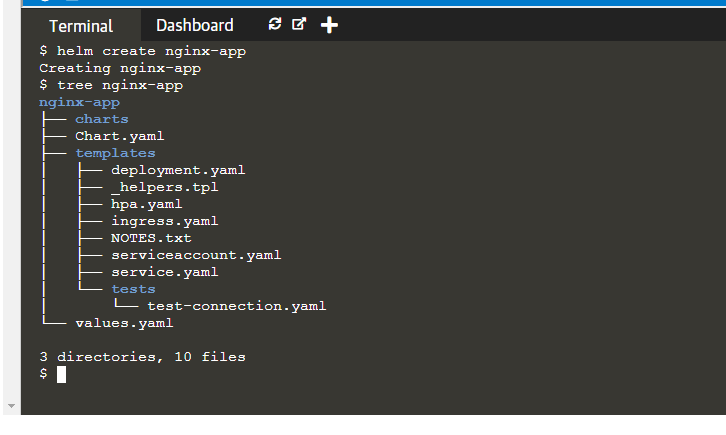 You will be able to see a new folder called "nginx-app" created with a few files and sub-folders. Open and read the files like Chart.yaml, values.yaml, or deployment.yaml. Describing each file is beyond the scope of this article. Finally, delete the chart by executing the following command.

Now that the repo has been added, we will use the following commands to search for MySQL and install the chart.

Copy the output of the last command into a file that has instructions on how to connect to the MySQL container, as shown in the below image.

Verify that the release is successful using the below commands.

The kubectl command will give you the list of API objects the release has created.

Now uninstall the release by using the command “helm uninstall mysql.” This will remove the release, leaving no trace of it. Use “kubectl get all” to check if any other item was left behind by the release.

So, it was a short tutorial where we learned what Helm is and how we can install, create, and uninstall Helm charts. Precisely, Helm is the Kubernetes package manager, which constructs packages called charts and installs, updates, and rollbacks and uninstalls them using the Helm command line. You can try more using the Helm documentation.

Published at DZone with permission of Aditya Bhuyan. See the original article here.