AOP (Aspect-Oriented Programming) is a way of programming that helps increase modularity and avoid strong coupling of code by separating cross-cutting concerns. Additionally, it is one of the key components of the Spring Framework.

Why AOP Is Needed?

Sometimes, we add code logic and it gets scattered and tangled across the application. Let's say that we want to add the code to check the performance of each method of services. Without AOP, we need to repeat some lines of code to each expected method. But using AOP, we can put the logic in one place and call it whenever it is necessary instead of duplicating and scattering the entire project.

1. Aspect: A modularization of a concern that cuts across multiple classes, e.g transaction management.

2. Join-Point: A point during execution of the program, such as execution of method or handling of an exception. In Spring AOP, join-point always represents method execution.

3. Advice: Action taken by an aspect at the particular join point.

How to Implement AOP?

Step 1: Create a Maven project structure, as shown below. 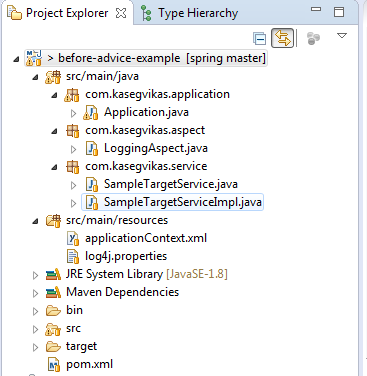 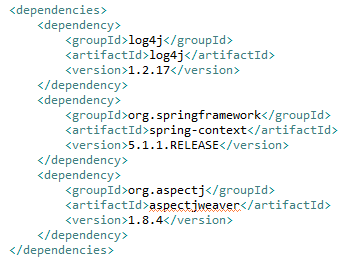 Step 3: Write a Target class/service that we want to apply aspect:

Step 5: Create an applicationContext.xml file for adding aspect and bean configurations, as shown below.

After execution of Application.java, we get an output that looks like the following:

In this article, I attempted to explain the Basics of Spring AOP (Aspect-Oriented Programming) with step-by-step implementations as an example. If you need more details, check out the Spring official document. The examples from this article are available on GitHub.