A strange thing happens when I try to Google Apache Ignite: Hazelcast's advertisement bubbles up to the top of the list, suggesting that Hazelcast is up to 50% faster than Apache Ignite:

The first suspicious thing to note right after you click on the link is that Hazelcast compares to Apache Ignite 1.5 that was released more than a year ago! Secondly, I totally agree that it's fine to boast about your success stories for some period of time, but it's funny to see when this continues throughout a year without updating benchmarking results on the targeted page.

Well, this seems to be an oversight on Hazelcast's marketing team side. This happens. So, let's help the team to go back to the reality and show a present state of affairs comparing the latest versions of Apache Ignite and Hazelcast.

The simplest way to benchmark a distributed platform like Apache Ignite or Hazelcast is to launch a cluster of several machines and run a client process that will produce the load and gather the benchmarking results. For the sake of general benchmarking, a cluster of four server/data nodes was prepared on AWS and the load was coming from a single client machine (aka application). Yardstick was used as a benchmarking framework. All the parameters and instructions are listed below: 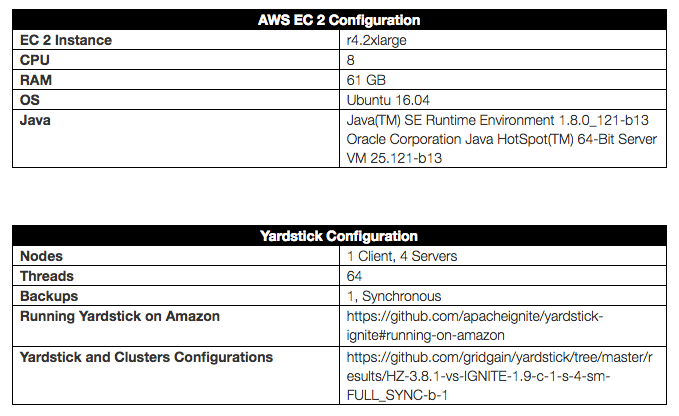 Following "Running Yardstick on Amazon" instructions with the provided configurations, we can reproduce these numbers: 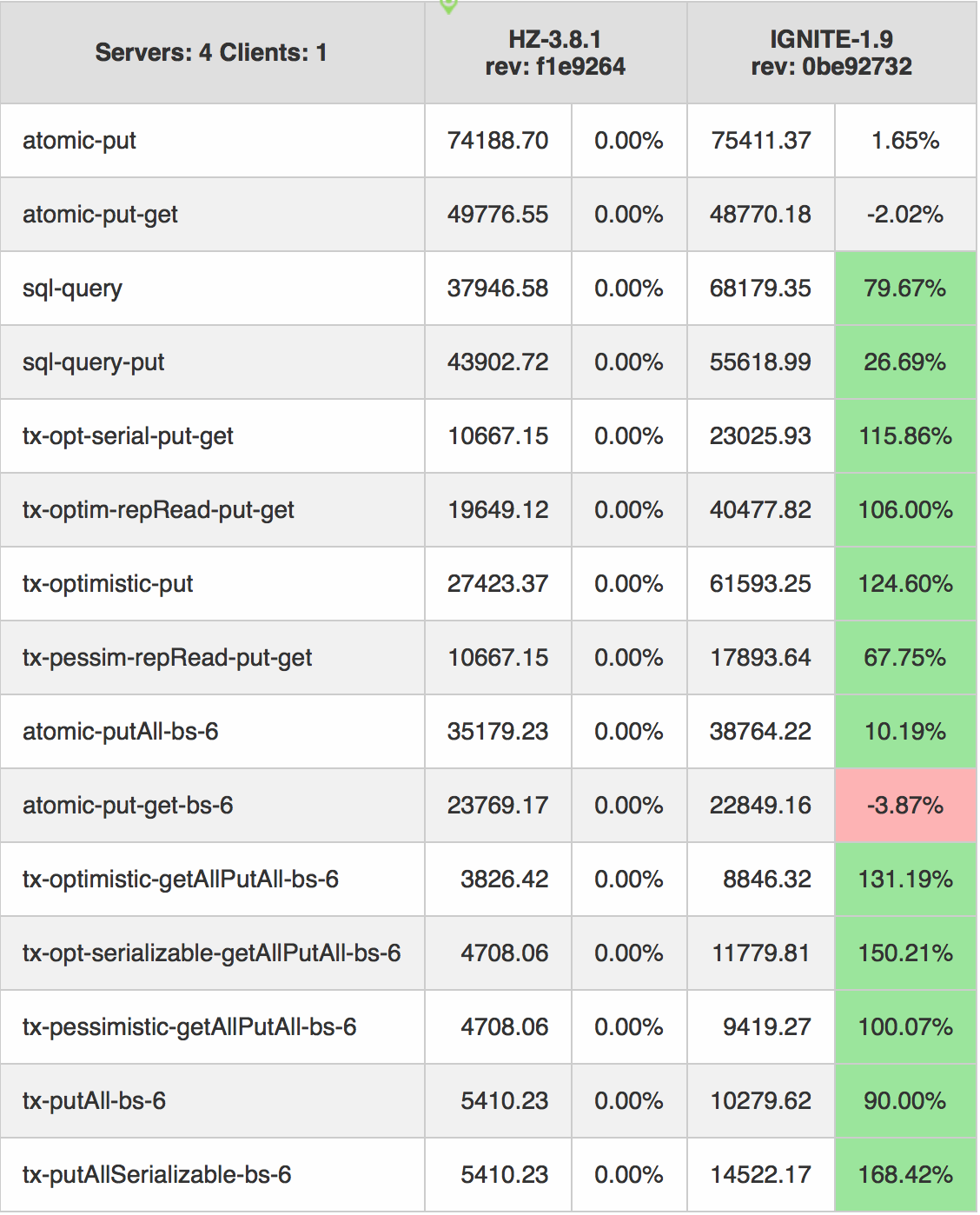 It's obvious that Apache Ignite 1.9 significantly outperforms Hazelcast 3.8.1 in most of the basic operations pulling ahead on up to 160% in some of the scenarios.

However, after that performance loss was spotted, it was decided to run the same set of the benchmarks but under the higher load that is more relevant to production scenarios - the load was generated by 8 client machines (aka. applications) rather than by a single one. The results were surprising and uplifting as we can see from the next section.

This is the only part of the previously provided Yardstick configuration that was modified:

At all, after the total number of client machines was increased from 1 to 8 the following numbers were reproduced: 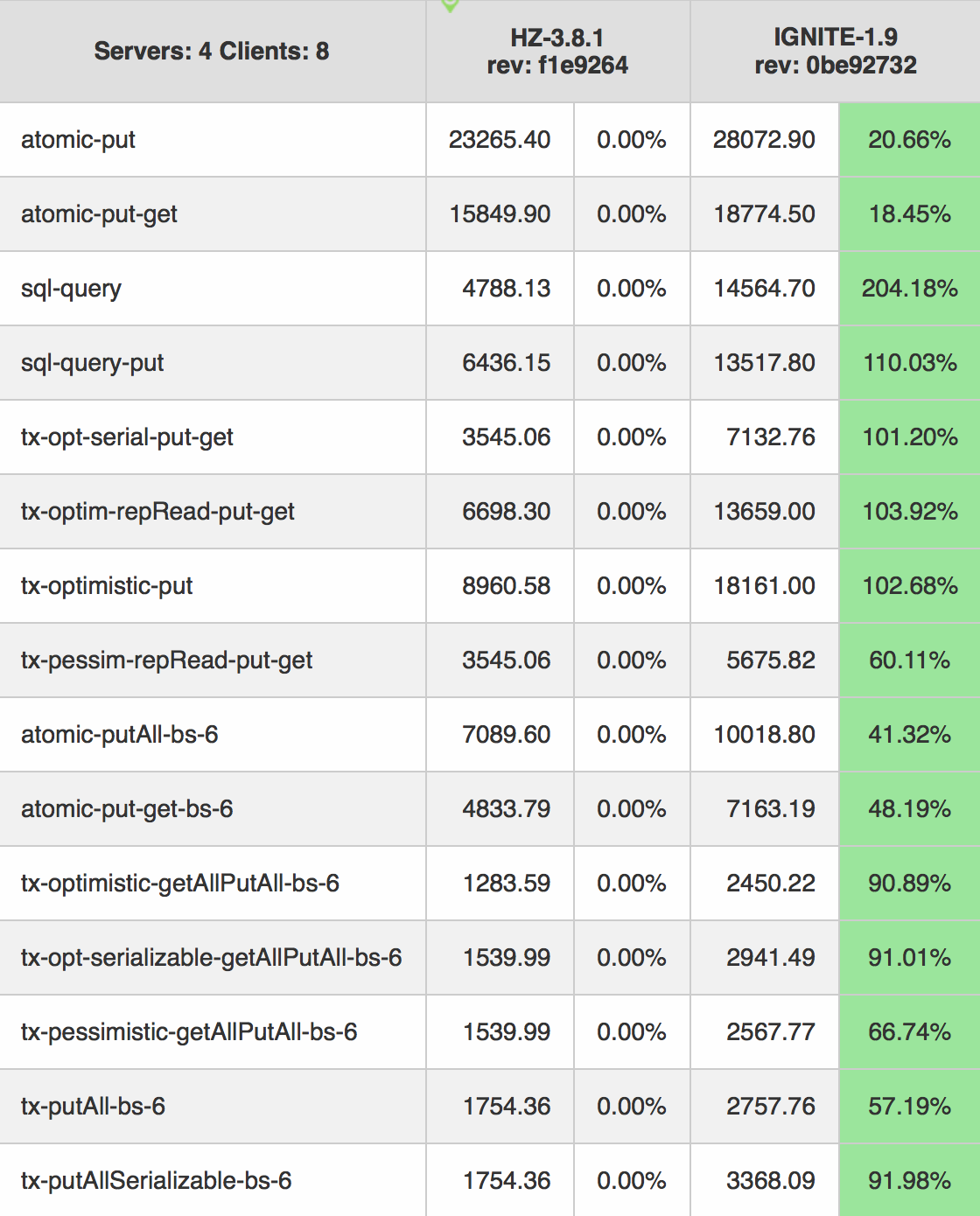 These are the numbers taken from one of the client machines. To get the total number of operations per second we just need to accumulate all of them. In any case, looking at the results now we see that Apache Ignite beats Hazelcast even under the higher load for every benchmark.

For instance, Apache Ignite ANSI-99 SQL engine now outperforms Hazelcast's predicates-based querying engine on 200% while in the 1 client machine scenario the difference was only around 80%.

Even more, Apache Ignite took a lead at all the atomic benchmarks jumping from 4% it lost to Hazelcast before to victorious 42% for the atomic-put-get-bs-6 scenario.

It's always up to you to decide what kind of product to use in production. But the golden rule is that you shouldn't blindly follow official numbers or data prepared by a vendor. Use all the information as a basement and then get to know a product and test it for your own scenario. Only this way you will find out which product suits your case more.