a while back i wrote about how the leading digits of factorials follow benford’s law . that is, if you look at just the first digit of a sequence of factorials, they are not evenly distributed. instead, 1’s are most popular, then 2’s, etc. specifically, the proportion of factorials starting with n is roughly log 10 (1 + 1/ n ).

someone has proved that the limiting distribution of leading digits of factorials exactly satisfies benford’s law . but if we didn’t know this, we might use a chi-square statistic to measure how well the empirical results match expectations. as i argued in the previous post , statistical tests don’t apply here, but they can be useful anyway in giving us a way to measure the size of the deviations from theory.

benford’s law makes a better illustration of the chi-square test than the example of prime remainders because the bins are unevenly sized, which they’re allowed to be in general. in the prime remainder post, they were all the same size.

here’s a plot of the distribution of the leading digits for the first 500 factorials. 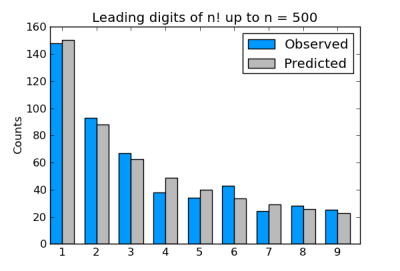 and here’s code to compute the chi-square statistic:

so the chi-square statistic suggests that the deviation from benford’s law is just what we’d expect from random data following benford’s law. and as we said before, this suggestion turns out to be correct.