In the traditional data processing paradigm, we move data to the code.

It can be depicted as follows ... 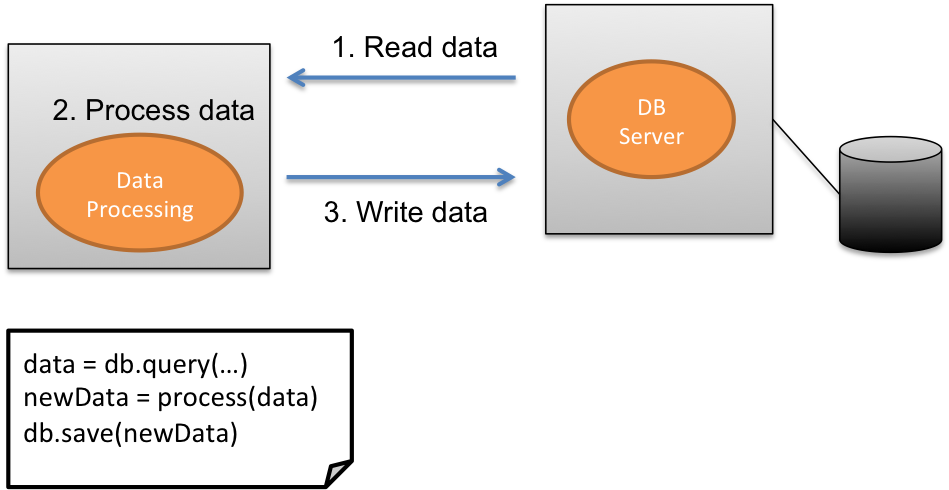 Then big data phenomenon arrives.  Because the data volume is huge, it cannot be hold by a single database server.  Big data is typically partitioned and stored across many physical DB server machines.  On the other hand, application servers need to be added to increase the processing power of big data. 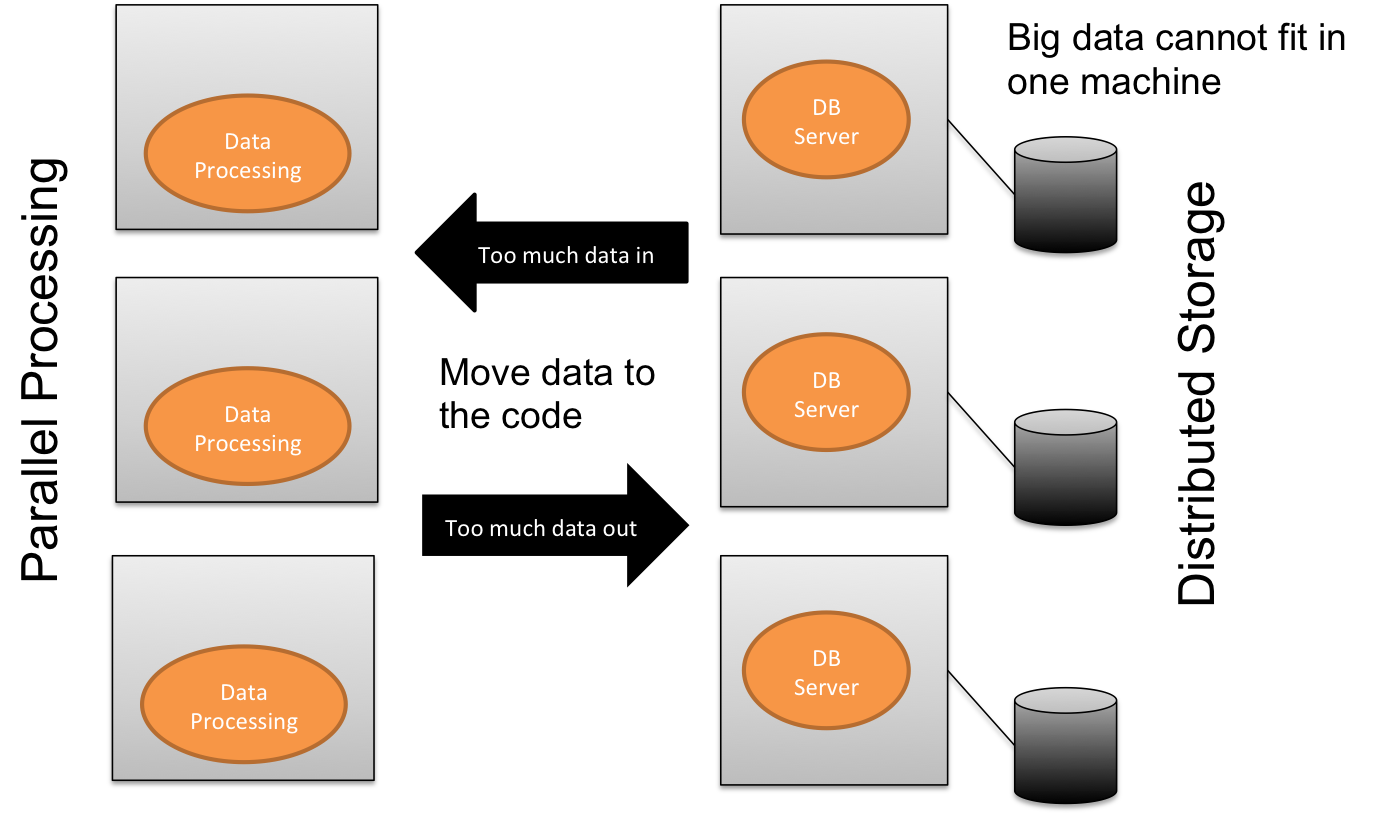 However, as we increase the number of App servers and DB servers for storing and processing the big data, more data need to be transfer back and forth across the network during the processing cycle, up to a point where the network becomes a major bottleneck.

To overcome the network bottleneck, we need a new computing paradigm.  Instead of moving data to the code, we move the code to the data and perform the processing at where the data is stored. 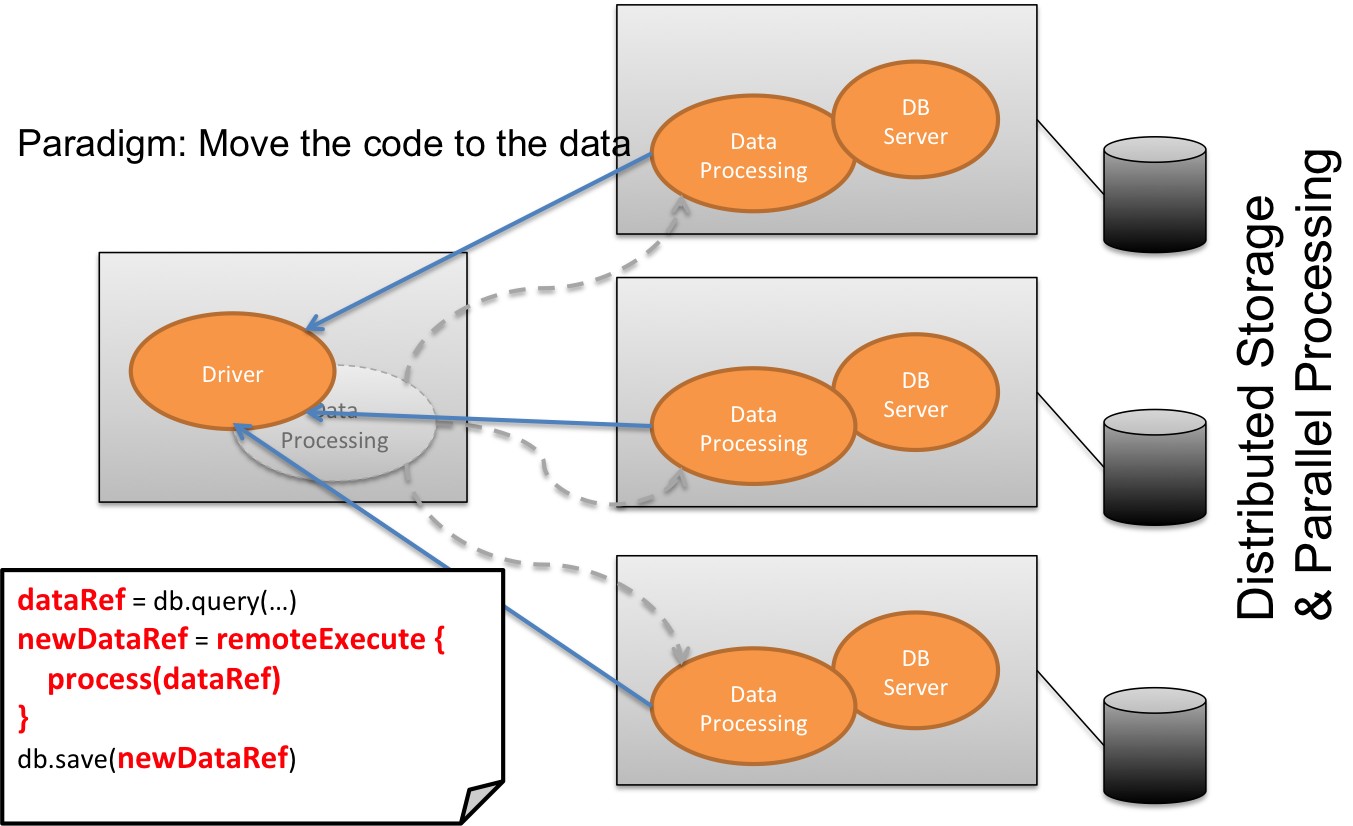 Notice the change of the program structure

By moving the code to the data, the volume of data transfer over network is significantly reduced.  This is an important paradigm shift for big data processing.

In the following session, I will use Apache Spark to illustrate how this big data processing paradigm is implemented.

Resilient Distributed Dataset (RDD) is how Spark implements the data reference concept.  RDD is a logical reference of a dataset which is partitioned across many server machines in the cluster. 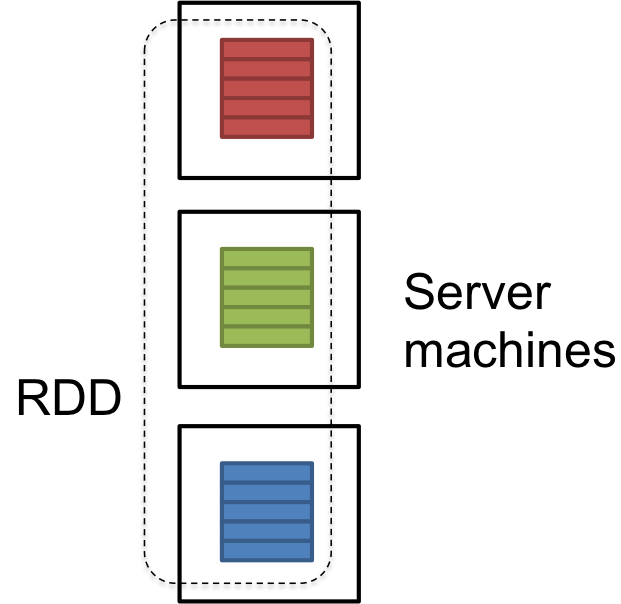 To make a clear distinction between data reference and data itself, a Spark program is organized as a sequence of execution steps, which can either be a "transformation" or an "action".

A typical program is organized as follows

Here is a word count example

When the driver program starts its execution, it builds up a graph where nodes are RDD and edges are transformation steps.  However, no execution is happening at the cluster until an action is encountered.  At that point, the driver program will ship the execution graph as well as the code block to the cluster, where every worker server will get a copy.

The execution graph is a DAG. 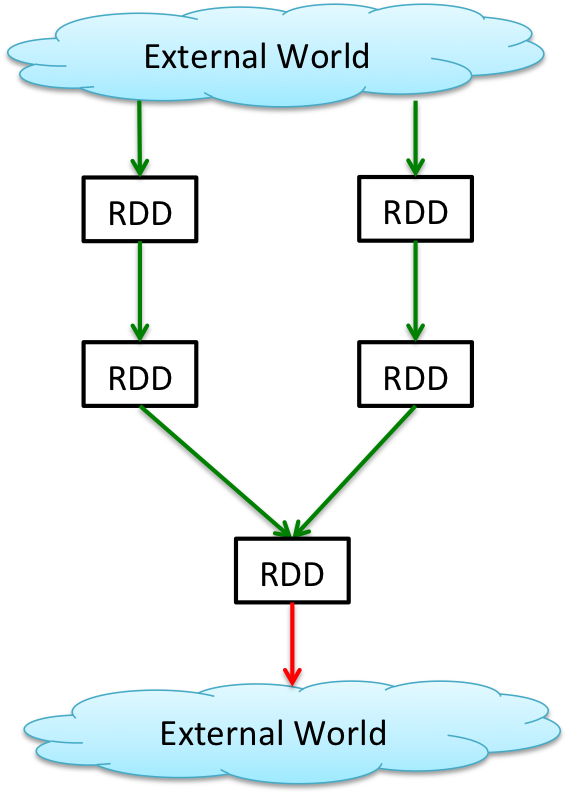 Although we ship the code to worker server where the data processing happens, data movement cannot be completely eliminated.  For example, if the processing requires data residing in different partitions to be grouped first, then we need to shuffle data among worker server. 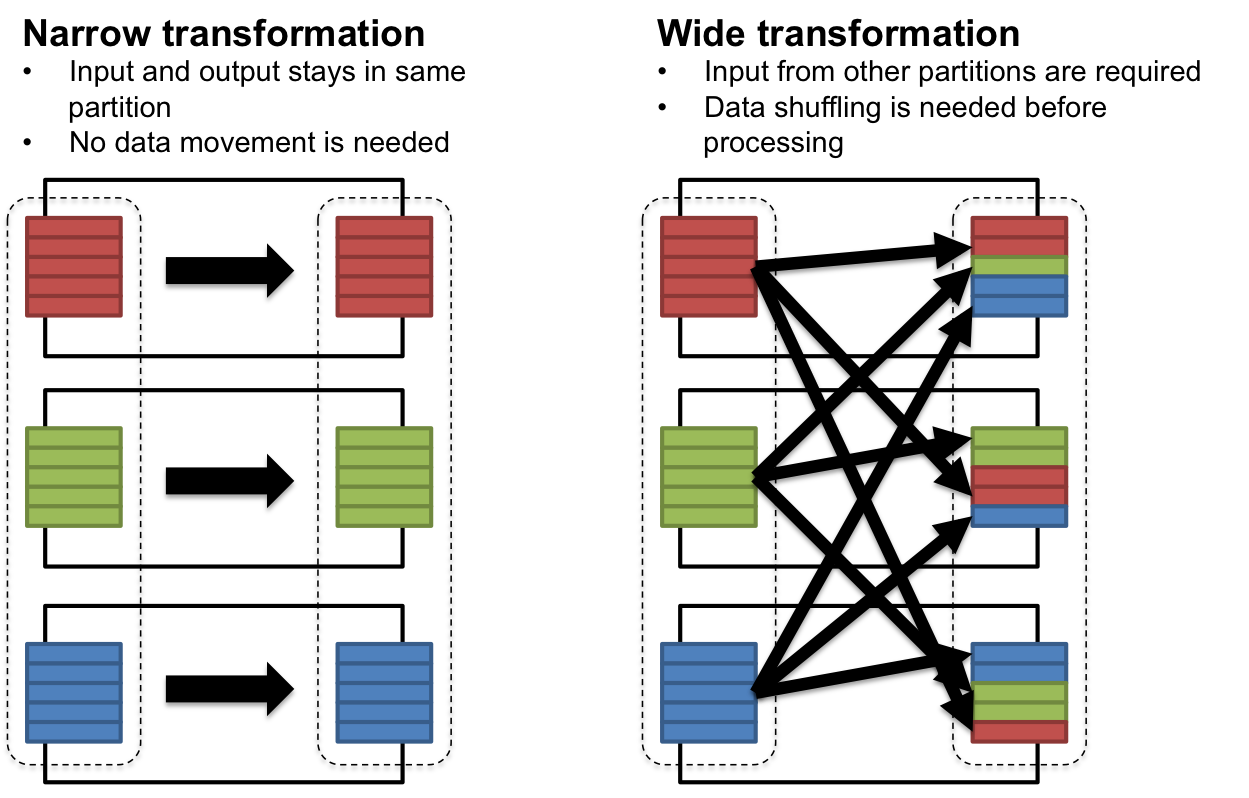 Joining two RDD can also affect the amount of data being shuffled.  Spark provides two ways to join data.  In a shuffle join implementation, data of two RDD with the same key will be redistributed to the same partition.  In other words, each of the items in each RDD will be shuffled across worker servers. 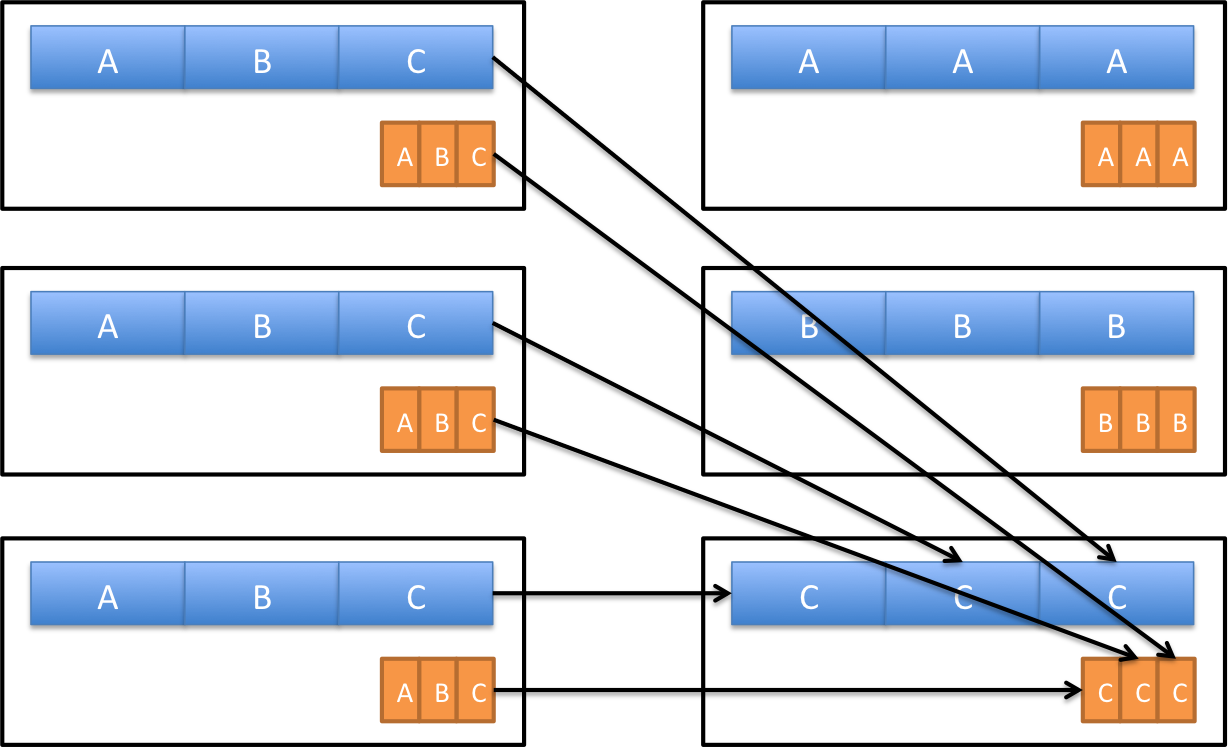 Beside shuffle join, Spark provides another alternative call broadcast join.  In this case, one of the RDD will be broadcasted and copied over to every partition.  Imagine the situation when one of the RDD is significantly smaller relative to the other, then broadcast join will reduce the network traffic because only the small RDD need to be copied to all worker servers while the large RDD doesn't need to be shuffled at all. 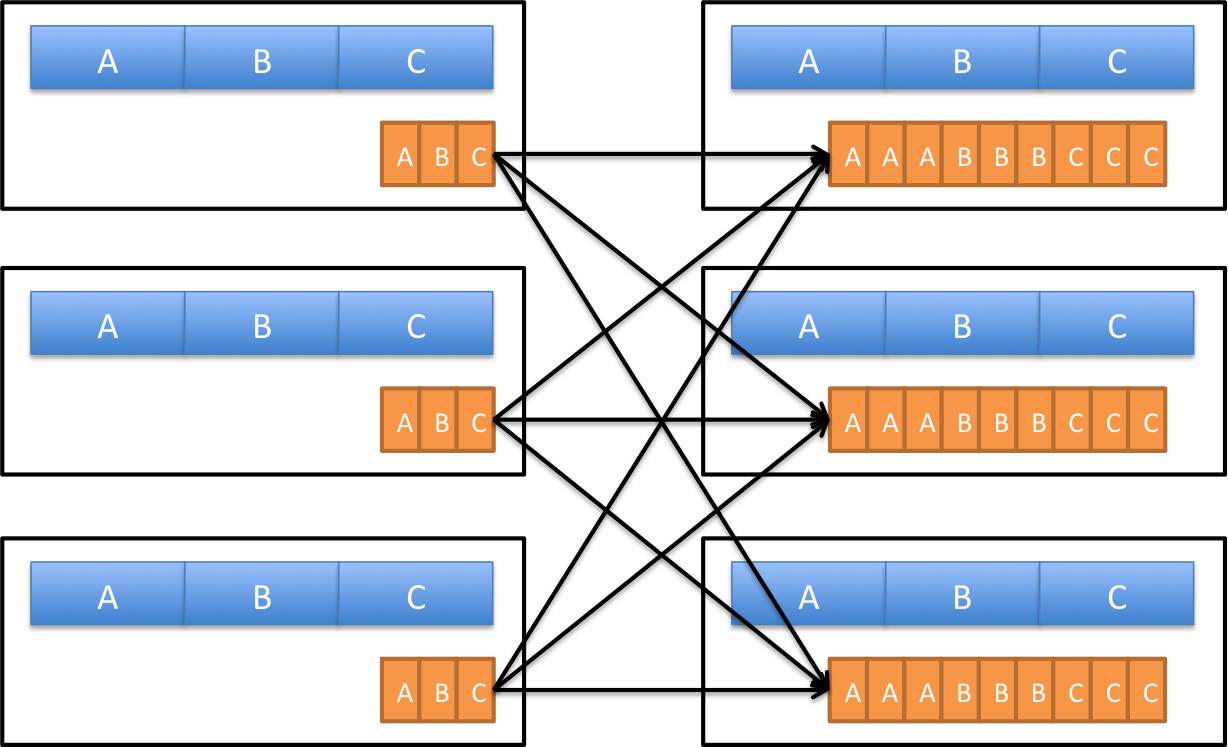 In some cases, transformation can be re-ordered to reduce the amount of data shuffling.  Below is an example of a JOIN between two huge RDDs followed by a filtering. 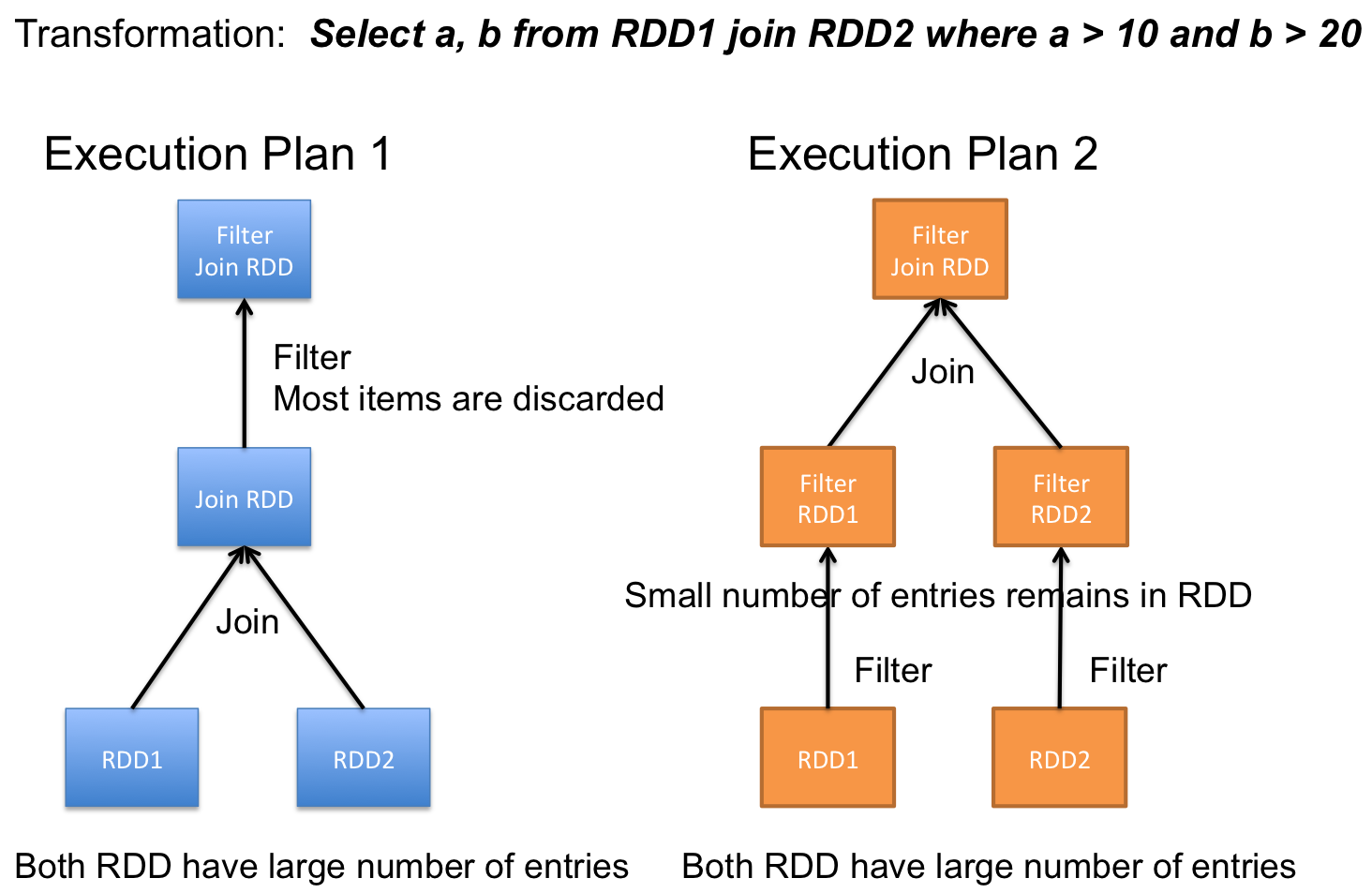 Plan1 is a naive implementation which follows the given order.  It first join the two huge RDD and then apply the filter on the join result.  This ends up causing a big data shuffling because the two RDD is huge, even though the result after filtering is small.

Plan2 offers a smarter way by using the "push-down-predicate" technique where we first apply the filtering in both RDDs before joining them.  Since the filtering will reduce the number of items of each RDD significantly, the join processing will be much cheaper.

As explain above, data shuffling incur the most significant cost in the overall data processing flow.  Spark provides a mechanism that generate an execute plan from the DAG that minimize the amount of data shuffling. 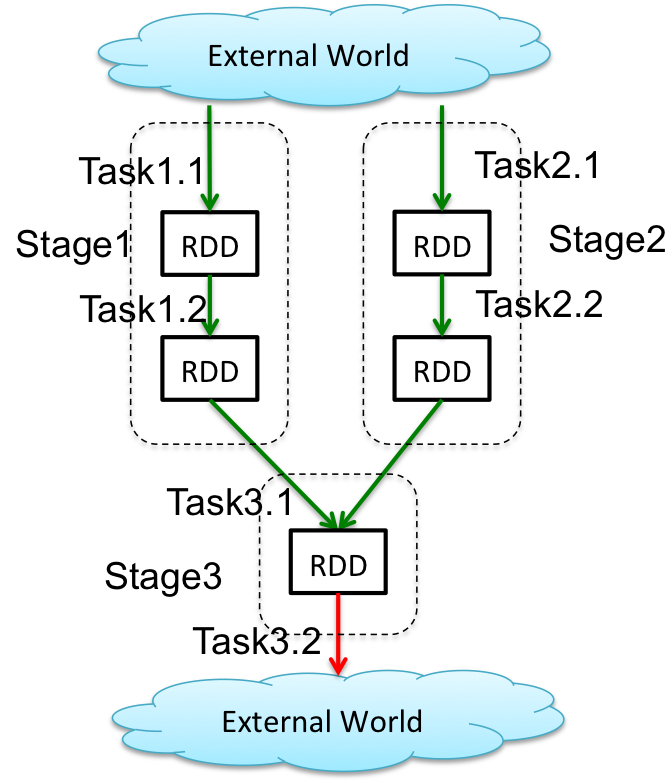 Since the DAG defines a deterministic transformation steps between different partitions of data within each RDD RDD, fault recovery is very straightforward.  Whenever a worker server crashes during the execution of a stage, another worker server can simply re-execute the stage from the beginning by pulling the input data from its parent stage that has the output data stored in local files.  In case the result of the parent stage is not accessible (e.g. the worker server lost the file), the parent stage need to be re-executed as well.  Imagine this is a lineage of transformation steps, and any failure of a step will trigger a restart of execution from its last step.

Since the DAG itself is an atomic unit of execution, all the RDD values will be forgotten after the DAG finishes its execution.  Therefore, after the driver program finishes an action (which execute a DAG to its completion), all the RDD value will be forgotten and if the program access the RDD again in subsequent statement, the RDD needs to be recomputed again from its dependents.  To reduce this repetitive processing, Spark provide a caching mechanism to remember RDDs in worker server memory (or local disk).  Once the execution planner finds the RDD is already cache in memory, it will use the RDD right away without tracing back to its parent RDDs.  This way, we prune the DAG once we reach an RDD that is in the cache.

Overall speaking, Apache Spark provides a powerful framework for big data processing.  By the caching mechanism that holds previous computation result in memory, Spark out-performs Hadoop significantly because it doesn't need to persist all the data into disk for each round of parallel processing.  Although it is still very new, I think Spark will take off as the main stream approach to process big data.