I needed to diff some OPML files today and came across this project. Even through it's 10 years old, it still mostly worked and the best part is it's a source distrib... :)

Applies to:
the XML Diff and Patch GUI tool

Summary: This article shows how to use the XmlDiff class to compare two XML files and show these differences as an HTML document in a .NET Framework 1.1 application. The article also shows how to build a WinForms application for comparing XML files.

There is no good command line tool that can be used to compare two XML files and view the differences. There is an online tool called XML Diff and Patch that's available on the GotDotNet website under the XML Tools section. For those who have not, you can find it at Microsoft XML Diff and Patch 1.0 [GD: yes, this link is busted... you can download it below]. It is a very convenient tool for those who want to compare the difference between two XML files. Comparing XML files is different from comparing regular text files because one wants to compare logical differences in the XML nodes not just differences in text. For example one may want to compare XML documents and ignore white space between elements, comments or processing instructions. The XML Diff and Patch tool allows one to perform such comparisons but it is primarily available as an online web application. We cannot take this tool and use it from command line.

This article focuses on developing a command-line tool by reusing code from the XML Diff and Patch installation and samples. The tool works very similar to the WinDiff utility; it presents the differences in a separate window and highlights them.

The XML Diff and Patch tool contains a library that contains an XmlDiff class, which can be used to compare two XML documents. The Compare method on this class takes two files and either returns true, if the files are equal, or generates an output file called an XML diffgram containing a list of differences between the files. The XmlDiff class can be supplied an options class XmlDiffOptions that can be used to set the various options for comparing files. 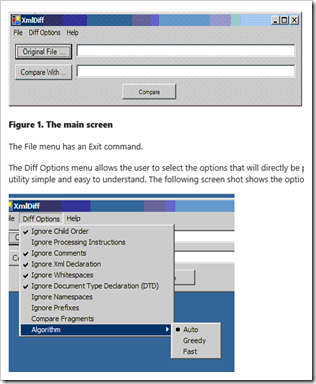 Winforms application that can be used to compare 2 XML files.

This code sample shows how to build a Windows forms application that utilizes the XML Diff & Patch library to show the difference between 2 XML files.

There's a bug somewhere in it in that it was giving me an error when trying to load the HTML into an IE window, but that's likely a path thing. In the end, it executed and diff'd the two XML files. And since we do have the source... :) 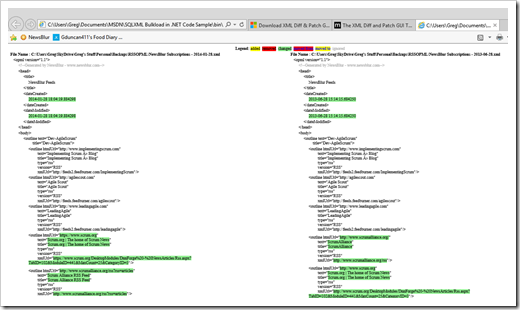 Another blast from the past is that this was available on the old GotDotNet site. I miss that site... :(