Hello and welcome to this two-part blog series that uses a practical application to demonstrate how to integrate Redis with AWS Lambda. The first part (this one) covers the application - by the end of this blog, you should have the solution deployed, played around with it and in the process, have a good overview of the solution.

The second part is about the Infrastructure (IaaC to be specific) aspects - it's mostly centered around AWS CDK along with some code walkthrough.

Over the course of this blog series, you will learn:

I have used Go for the Lambda functions (AWS-lambda-go) and infrastructure (with CKD Go support), but you should be easily able to apply the concepts to the programming language of your choice.

As always, the code is available on Github

Here is a quick overview of the services involved in the solution:

Don't worry, it's simpler than it sounds! Here is the high-level architecture:

The solution can be divided into two logical parts:

I told you, it's quite simple!

Alright, with the intro out of the way, we can move on to the fun part - which is deploying the application. Before that, make sure you have the following ready:

Deploy the Application - One CDK Stack at a Time

We will cover the details in the second part. For now, just know that the infrastructure part of this solution is comprised of three (CDK) Stacks (in the context of a single CDK App). Although it's possible to deploy all of them together (with cdk deploy --all), we will do it one by one. This way, you can review what's happening at each stage, introspect the components that have been created, and better understand how everything is wired together.

Starting with the Infrastructure...

The first stack deploys a VPC (and also subnets, NAT gateway, etc.), a MemoryDB for the Redis cluster, and a few security groups.

Choose a password of your choice for MemoryDB and export it as an environment variable (this is just for demonstration purposes - for production, you will have specific processes in place to handle sensitive info)

Be mindful of the password requirements. From the documentation:

"In particular, be aware of these user password constraints when using ACLs for MemoryDB:

Change to the correct folder and kick off the stack deployment:

There is a lot to be done. While CDK is hard at work for us, you need to wait patiently :) This is probably a good time to navigate to the CloudFormation in AWS console and see what's going on behind the scenes. 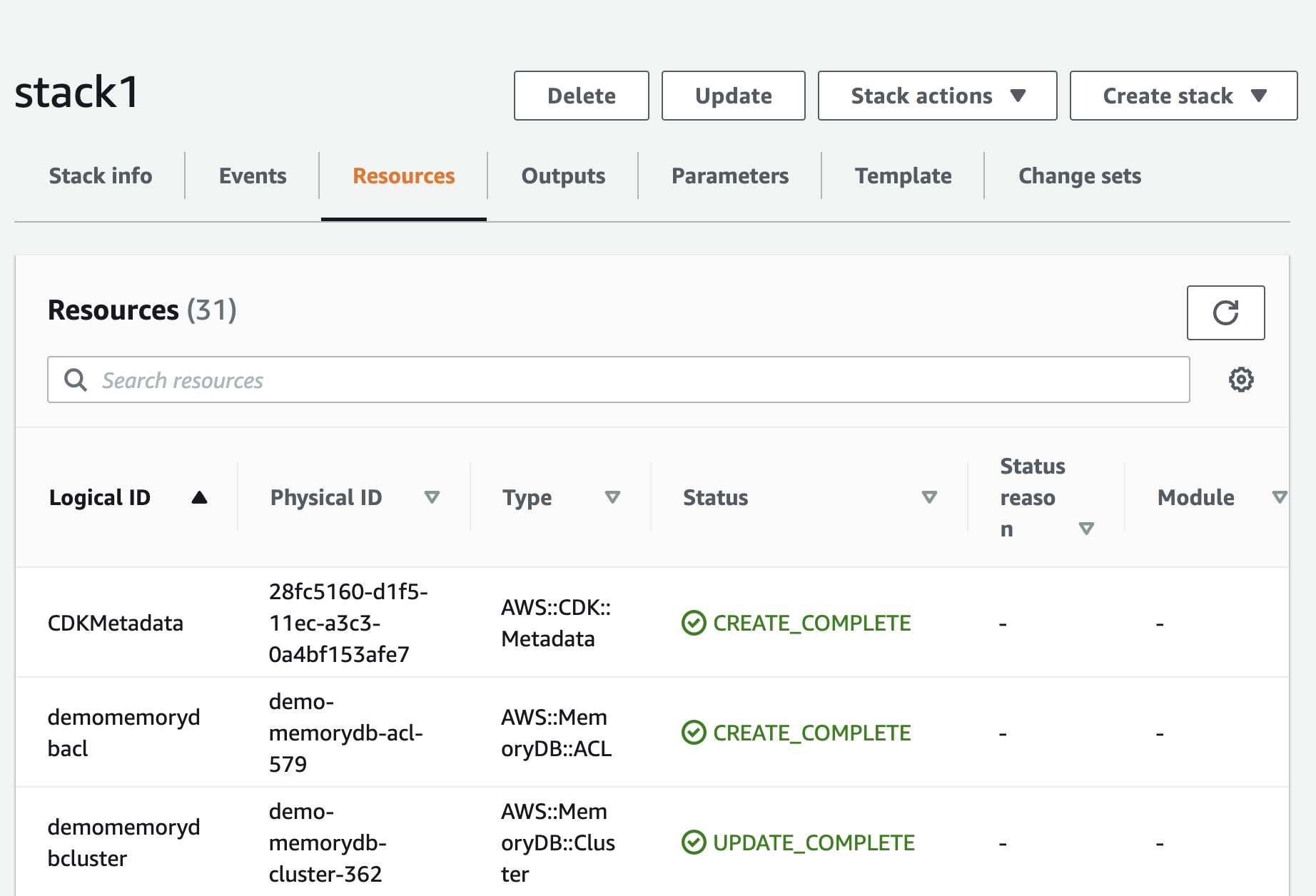 Once the stack creation is complete, go to the AWS console and check out your freshly minted VPC, MemoryDB cluster, and other components!

Here is the stack output for your reference: 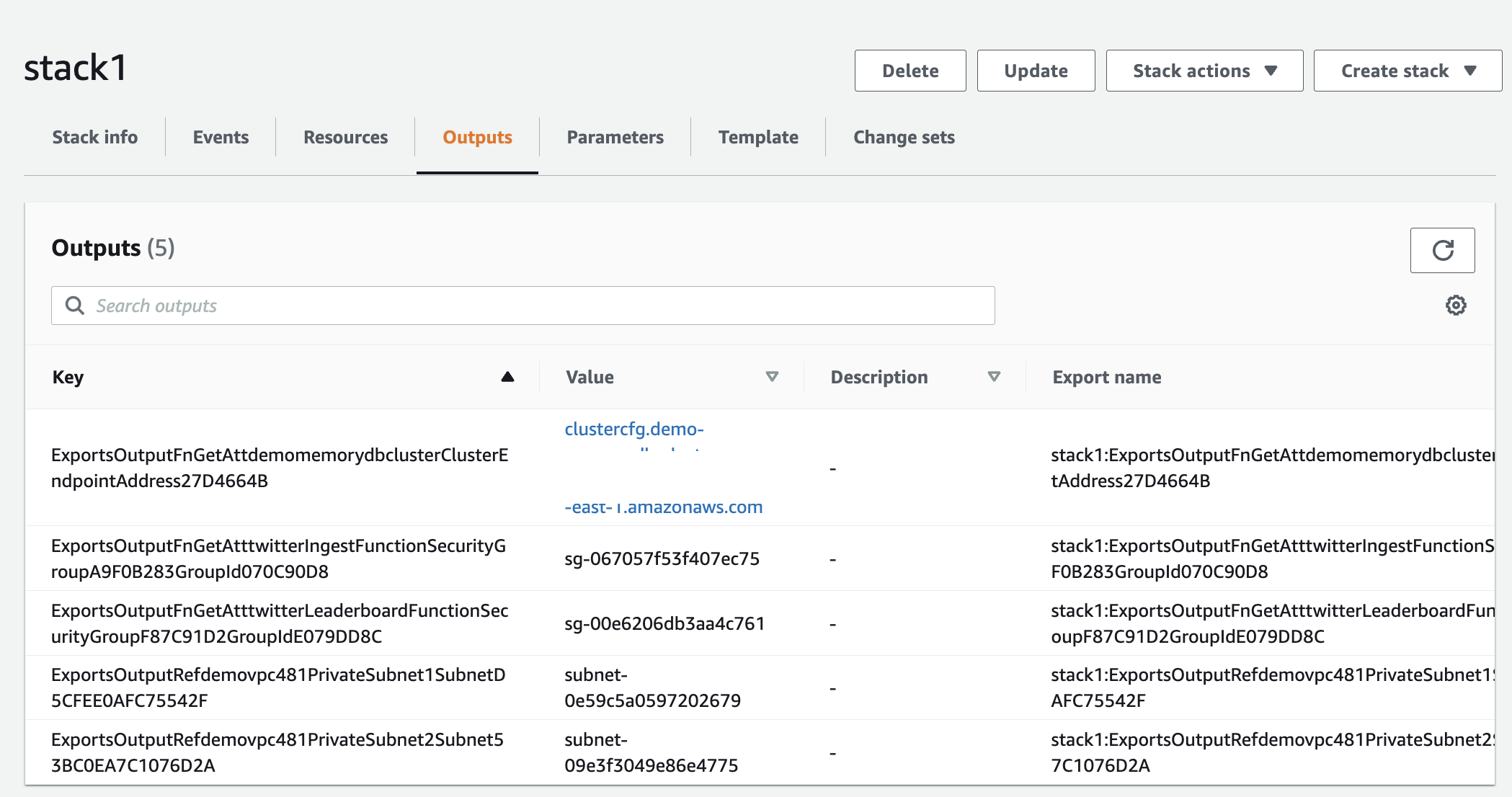 The next two stacks deploy separate Lambda functions. Before moving on though, make sure you build the Go binaries for both these functions.

Move to the respective folders and just invoke go build for each function:

To package the Lambda function as a Docker container, I used the Go:1.x base image. But, you can explore other options as well. During deployment (via cdk deploy), the Docker image is built locally, pushed to a private ECR registry and finally the Lambda function is created - all this, with a few lines of code!

The Second Stack - For the First Lambda Function

The function requires your Twitter API credentials (along with the MemoryDB password) - seeds them as environment variables. Then, initiate stack creation:

This one will be faster (compared to stack1), I promise!

Once the stack creation is complete, to make things work, there is one manual step required. Go to the AWS console, open the Lambda function (named tweet-ingest-function), that was just created, click Add Trigger and manually add the CloudWatch trigger configuration. 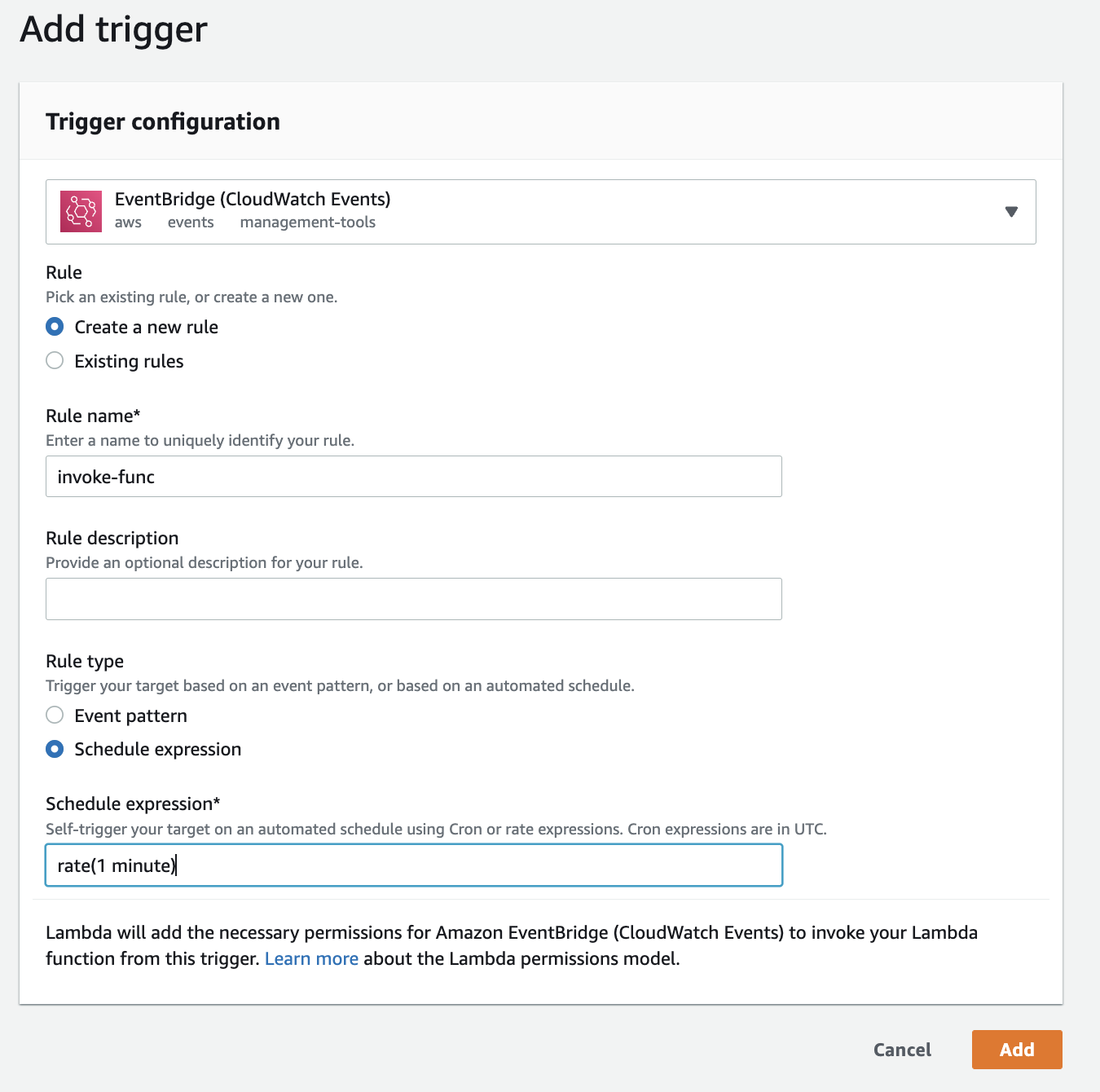 Now your function will be automatically triggered once every minute!

To check how things are going, check out the logs for your Lambda function (AWS console > Lambda > Monitor)

I would also encourage you to check the VPC configuration for your Lambda function:

And Finally, Deploy the Leaderboard Function

After successful deployment, you should have a Lambda Function URL ready for you to access - you can simply copy it from the stack output!

Just access the endpoint (I have used curl CLI, but a browser should work just fine):

You will get back a JSON payload with info about the top 10 hashtags along with their names and the number of times they were mentioned - something similar to this:

This concludes the first part. In the second one, we dive into the CDK aspects and look at some Go code - see you there!