Open-source software (OSS) has had a profound impact on modern application delivery. It has transformed how we think about collaboration, lowered the cost to maintain IT stacks, and spurred the creation of some of the most popular software applications and platforms used today.

The observability landscape is no different. In fact, one could argue that open-source observability tools have been even more transformative within the world of monitoring and debugging distributed systems. By making powerful tools available to everyone — and allowing anyone to contribute to their core construct — open-source observability tools allow organizations of all sizes to benefit from their powerful capabilities in detecting error-prone patterns and offering insights of a framework's internal state. 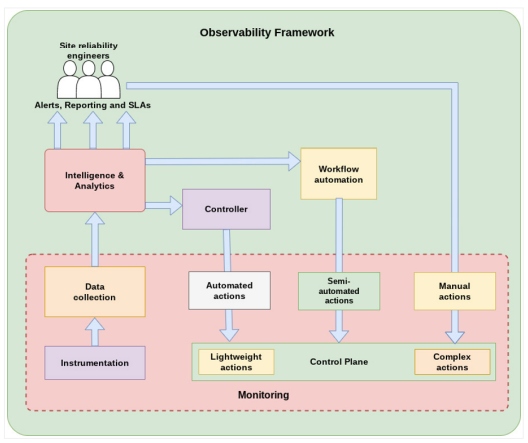 Observability frameworks are typically categorized into:

Observability in itself is built around the open-source concept that relies on the decentralized access of key indicators for collaborative action and performance enhancement. Building an open-source framework for observability relies on fewer dependencies than centralized, proprietary software solutions.

Many organizations use OSS because it’s free and easy to use, but there’s more to it than that. Open-source tools also offer several advantages over proprietary solutions to monitor how your applications are performing. Beyond monitoring application health, open-source observability tools enable developers to retrofit the system for ease of use, availability, and security. Using OSS tools for observability offers numerous other benefits, including:

An optimally designed observability framework helps predict the onset of potential anomalies without being caught off-guard. It is important to be able to identify the root cause and fix the problem before it impacts the cluster performance or availability.

A distributed system's observability strategy should be built upon the four golden signals: latency, saturation, errors, and traffic. These signals are key representations of the core aspects of a cluster state’s services that collectively offer a contextual summary of its functioning and performance issues.

Although the high-level information produced by these signals might not be granular on its own, when combined with other data of the key pillars, such as event logs, metrics, or traces, it's easier to pinpoint the source of a problem (see Figure 2). 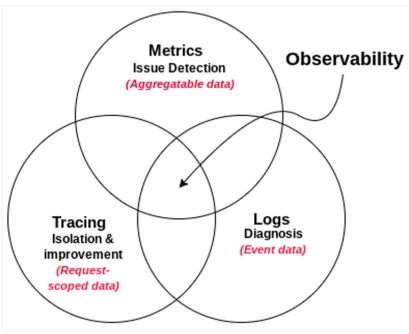 Event logs offer rich insights to identify anomalies within distributed systems. Use open-source tools that help capture occurrences, such as when an application process was executed successfully or a major system failure occurred. Contextual analysis of such occurrences helps developers quickly identify faulty components or interactions between endpoints that need attention.

Logs should also combine timestamps and sequential records of all cluster events. This is important because time-series data helps correlate events by pinpointing when something occurred, as well as the specific events preceding the incident.

Open-source tools are often considered vulnerable to common attack patterns. As a recommended strategy, open-source tools should be vetted for inherent flaws and potential configuration conflicts they may introduce to an existing stack. The tools should also support the building of an observability framework that complements a shift-left approach for security, which eliminates the need for reactive debugging of security flaws in production environments.

Beyond identifying the root cause of issues, the toolchain should enrich endpoint-level event data through continuous collection and aggregation of performance metrics. This data offers actionable insights to make distributed systems self-healing, thereby eliminating manual overheads to detect and mitigate security and performance flaws.

Observing distributed systems extensively relies on a log and metrics store, a query engine, and a visualization platform. There are different observability platforms that focus on measuring these indicators individually. Though they work independently, several of them work together extremely well, creating comprehensive observability setups tailored to an organization’s business objectives.

Along with considerations for the observability components, consider what it means to observe a system by factoring in scalability. For instance, observing a multi-cloud, geographically distributed setup would require niche platforms when compared to monitoring a monolithic, single-cluster workload.

By providing in-depth insights of software processes and resources, observability allows site reliability engineers (SREs) to assure optimum performance and health of an application. However, the challenges of observing the state and behavior of a distributed system are often more complex than assumed. While it is important to inspect the key indicators, it is equally important to adopt the right practices and efficient tools that support observability to collectively identify what is happening within a system, including its state, behavior, and interactions with other components.

Some recommended best practices to enable effective observability in distributed systems include:

There are several open-source observability tools that can provide insight into system performance, identify and diagnose problems, and help you plan capacity upgrades. While each tool comes with its own strengths and weaknesses, there are a few that stand out above the rest. It is also a common approach to use them together to solve different complexities. The table below outlines some popular open-source observability tools, their core features, benefits, and drawbacks to help understand how they differ from each other.

Observability is a multi-faceted undertaking that involves distributed, cross-functional teams to own different responsibilities before they can trust the information presented through key indicators. Despite the challenges, observability is essential for understanding the behavior of distributed systems. With the right open-source tools and practices, organizations can build an open-source observability framework that ensures systems are fault-tolerant, secure, and compliant. Open-source tools help design a comprehensive platform that is flexible and customizable to an organization’s business objectives while benefiting from the collective knowledge of the community.