In this blog post, I will walk you through the installation of a fresh copy of the ClickHouse database, load a few sample datasets into it, and query the loaded datasets. I strongly guess that this short post will help any developer to save several hours and give a straight foreword guideline to start with a new OLAP database. The post is based on the ClickHouse documentation. If you have any confusion, you can refer to the original documentation for further information.

To keep the entire process simple and easy, I am going to use the ClickHouse Docker image to run inside a Docker container.

You first need to make sure Docker is installed and properly configured (proper proxy is configured if you are working under a corporate firewall) in your host operating system.

We are going to use the host OS file system volume for the ClickHouse data storage. All the datasets, along with meta-data, will be stored into this directory. So, create a directory somewhere in your host OS. In my case, it's called clickhouse_db_vol .

Download and start an instance of the ClickHouse DB. Use the following shell command in your favorite terminal.

The above command will download a Docker image from the Hub and start an instance of the ClickHouse DB. We also exposed the port 8123 so that we can use the ClickHouse REST interface to interact with it. Here, the first 8123 is the local OS port, and the second 8123 is the container port. You should have a similar output into the terminal after up and running the ClickHouse docker container as shown below.

Now, when the ClickHouse database is up and running, we can create tables, import data, and do some data analysis ;-). To work with the database, ClickHouse provides a few interfaces and tools. For simplicity, we are going to use the HTTP interface and the ClickHouse native client.

A new client should be run and connect to the server through the port 9000.

So far so good. At this moment, we are almost ready to execute DDL and DML queries.

Now, create a database. A database is a logical group of tables in ClickHouse DB. Execute the following SQL query into the ClickHouse native client terminal.

Next, run the following DDL query.

The above SQL query will display all the existing databases into the DB.

As we mentioned earlier, we are trying to keep things simple. So, create a table with three columns using the following query.

Then, insert some data. Use the following DML statements for inserting data into the table 'TEST'.

The above query should return the following output.

You may wonder why I didn't execute the COMMIT statement above. This is because ClickHouse DB is not a transactional database and doesn't support any types of transactions.

At these moments, you can also use any REST tools, such a Postman to interact with the ClickHouse DB. Use your favorite REST API testing tool and send the following HTTP request.

Here, we send an HTTP GET request with a SQL query, which should return output as shown below. 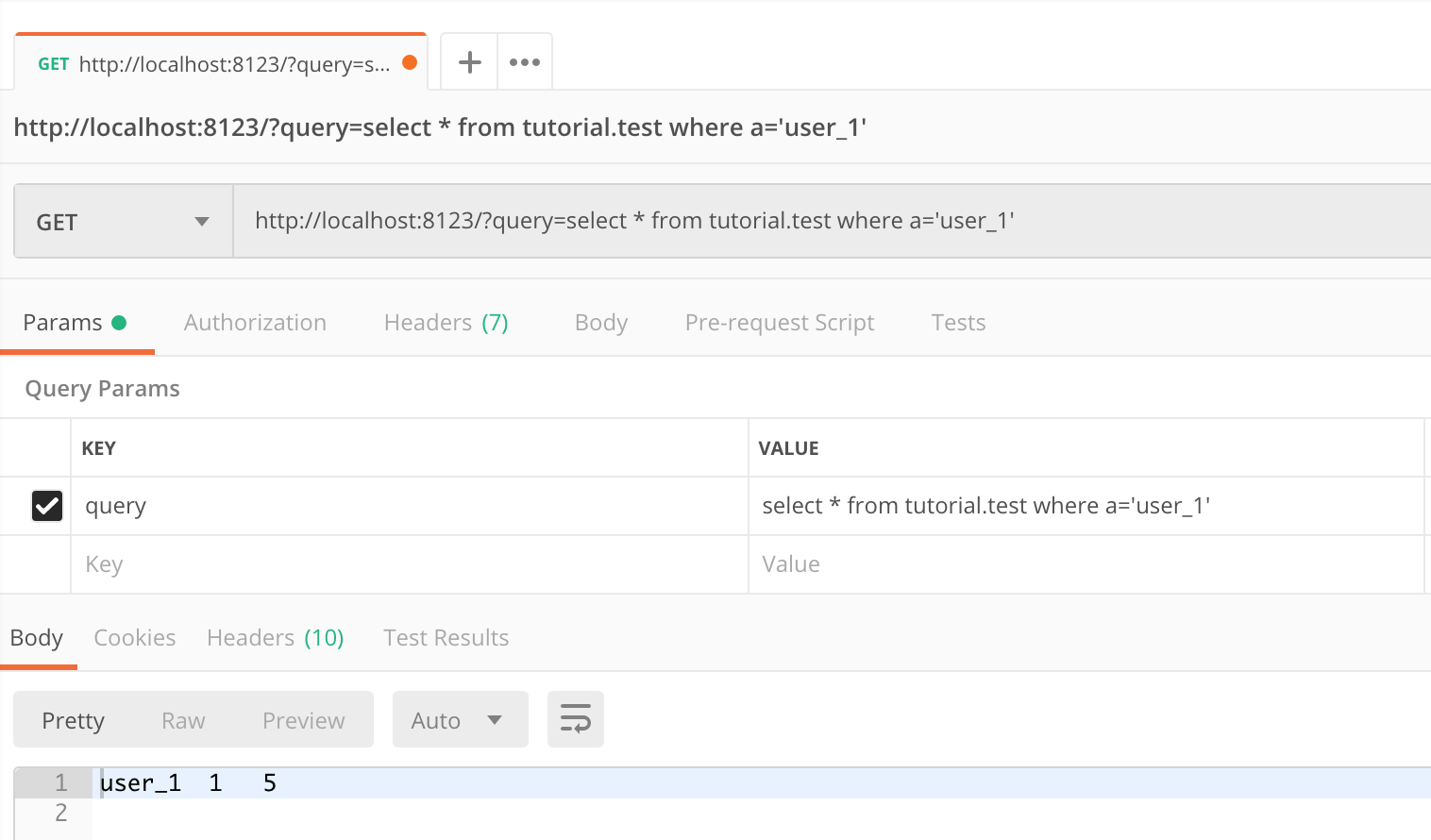 Output from GET request

So far, everything is very simple. Let's do something complex. We are going to load some huge datasets into the database and run some analytical queries against the data.

Download the sample dataset from the resource. The resource contains prepared partitions for direct loading into the ClickHouse DB. The dataset contains Airplane performance history at the USA airport. The size of the datasets are about 15 Gb and contains 183 millions of rows.

Unarchive the file into the ClickHouse data directory that we created earlier.

The unarchiving process will take a few minutes to complete. After completing the process, you should find a similar directory structure in your ClickHouse data directory. 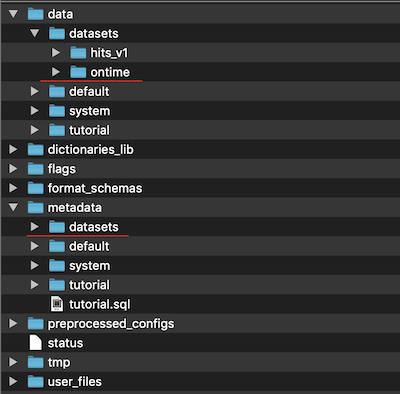 Execute the SQL statement, show database, to ensure that the database named "datasets" is already created.

Now, we are ready to query the database. Execute the following query.

The query will return the most popular destinations by the number of directly connected cities for various year ranges.

The SQL query takes 7.3 seconds to execute. Let's run a few more queries as shown below.

It returns a percentage of flights delayed for more than 10 minutes, by year.