First, What Is an API?

In the simplest of terms, an API is a piece of software that plugs one application directly into the data and services of another by granting it access to specific parts of a server. APIs let two pieces of software communicate; they’re the basis for everything we do on mobile, and they allow us to streamline IT architectures, power savvied marketing efforts, and make it easier to share data sets.

What Is a REST API?

REST (Representational State Transfer) is truly a “web services” API. REST APIs are based on URIs (Uniform Resource Identifier, of which a URL is a specific type) and the HTTP protocol, and use JSON for a data format, which is super browser-compatible. (It could also theoretically use the SOAP protocol, as we mentioned above.) REST APIs can be simple to build and scale, but they can also be massive and complicated—it’s all in how they’re built, added on to, and what they’re designed to do.

SOAP (Simple Object Access Protocol) is its own protocol, and is a bit more complex by defining more standards than REST—things like security and how messages are sent. These built-in standards do carry a bit more overhead, but can be a deciding factor for organizations that require more comprehensive features in the way of security, transactions, and ACID (Atomicity, Consistency, Isolation, Durability) compliance. For the sake of this comparison, we should point out that many of the reasons SOAP is a good choice rarely apply to web services scenarios, which make it more ideal for enterprise-type situations. 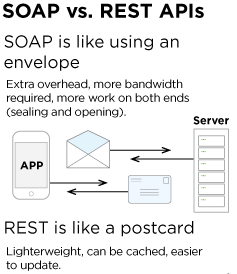 REST operates through a solitary, consistent interface to access named resources. It’s most commonly used when you’re exposing a public API over the Internet. SOAP, on the other hand, exposes components of application logic as services rather than data. Additionally, it operates through different interfaces. To put it simply, REST accesses data while SOAP performs operations through a more standardized set of messaging patterns. Still, in most cases, either REST or SOAP could be used to achieve the same outcome (and both are infinitely scalable), with some differences in how you’d configure it.

SOAP was originally created by Microsoft, and it’s been around a lot longer than REST. This gives it the advantage of being an established, legacy protocol. But REST has been around for a good time now as well. Plus, it entered the scene as a way to access web services in a much simpler way than was possible with SOAP by using HTTP.

Benefits of REST Over SOAP

In addition to using HTTP for simplicity, REST offers a number of other benefits over SOAP:

Still, SOAP remains the preferred protocol for certain use cases. The general consensus among experts these days is that REST is the typically preferred protocol unless there’s a compelling reason to use SOAP (and there are some cases in which SOAP is preferred).

Benefits of SOAP Over REST

Because you can achieve most outcomes using either protocol, it’s sometimes a matter of personal preference. However, there are some use cases that SOAP tends to be better-suited for. For instance, if you need more robust security, SOAP’s support for WS-Security can come in handy. It offers some additional assurances for data privacy and integrity. It also provides support for identity verification through intermediaries rather than just point-to-point, as provided by SSL (which is supported by both SOAP and REST).

Another advantage of SOAP is that it offers built-in retry logic to compensate for failed communications. REST, on the other hand, doesn’t have a built-in messaging system. If a communication fails, the client has to deal with it by retrying. There’s also no standard set of rules for REST. This means that both parties (the service and the consumer) need to understand both content and context.

Other benefits of SOAP include:

The Bottom Line: When to Use SOAP or REST

Some people try to say that one process is better than the other, but this statement is incorrect. Each protocol has definite advantages and equally problematic disadvantages. You need to select between SOAP and REST based on the programming language you use, the environment in which you use it, and the requirements of the application. Sometimes SOAP is a better choice and other times REST is a better choice. In order to avoid problems later, you really do need to chart the advantages and disadvantages of a particular solution in your specific situation.

There’s one absolute you should get from this article. Don’t reinvent the wheel. It’s amazing to see companies spend big bucks to create web services that already exist (and do a better job than the web service the company creates). Look for free alternatives whenever possible. In many cases, the choice of web service also determines your choice of protocol.