In this post, I am going to illustrate how to use CompletableFuture with work managers.

A basic example of CompletableFuture, which uses a fork-join thread pool.

CompletableFuture with executor service is used as follows:

For work manager, I am using the commonJ framework (commonj-twm.jar), which provides APIs to schedule the tasks and to submit the work instances for execution. Spring provides a wrapper on the top of it in the form of WorkManagerTaskExecutor,which delegates tasks to an underlying target work manager, implementing the commonj.work.WorkManagerinterface.

Let’s first discuss how to configure the task executor bean in Spring. commonjTaskExecutor is defined as a Spring bean of a WorkManagerTaskExecutortype. The first property workManagerNameis the work manager name, which is a jndi name of the CommonJ work manager. The second property resourceRefis to indicate whether jndi lookup occurs in a J2EE container.

In web.xml, we define the work manager by configuring the resource reference name (res-ref-name) i.e. the jndi of the resource configured in a container, resource type (res-type) andres-auth i.e. resource authentication data (application or container).

In WebLogic, you can view work managers by navigating to Domain_Name->Work Managers.

In typical Java EE applications, you should configure constraints/policies for the work manager. For our example, I have kept the default configuration. 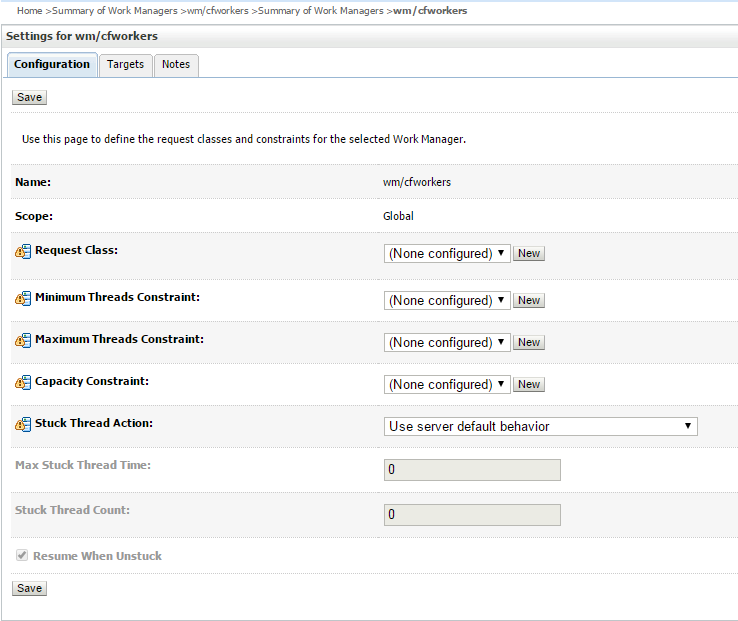 Now, we are ready to use work manager in the code. For that, just get the work manager bean and use it to execute a runnable task.

Then comes the last part, which is using work manager along with CompletableFuture. For this, we need to explore CompletableFuture APIs meticulously. Let's dive deep into CompletableFuture. Important APIs of this class such as supplyAsync, runAsync, and asyncSupplyStage provide overloaded methods to accept custom executors.

By default, ForkJoinPool is used.

Let’s focus on the supplyAsyncmethod.

Note that Executor is an interface (part of java.util.concurrent package). So, it’s inevitable to have an executor instance which is assignable from Executor in order to use it with the supplyAsyncmethod. The following code illustrates the creation and retrieval of computation using work manager and CompletableFuture.

And that’s it. Take a note that intentionally, I have cast bean to TaskExecutor, which implements the Executor interface.

CompletableFuture in Java 8 is a giant step forward; it’s a very powerful feature of Java enabling nonblocking code. However, it should be used cautiously in Java EE applications by properly configuring work managers.

You can find my code at my GitHub.