whenever you hover over any piece of code in eclipse, it pops up a tooltip that displays more information about the item, such as its declaration, variable values or javadoc information, as in the example below.

although useful at times , this becomes extremely annoying after a while, especially when you’re using your mouse to browse some code. popup after popup of unwanted information keeps obscuring your view of the code, leading to some lengthy expletives and big productivity loss. it’s useful information, but not every time all the time , almost like your car’s gps giving you directions to 10 different places at once while you’re still parked in the driveway.

luckily there is a way to alleviate the problem and all it takes is changing some preferences in eclipse. we don’t want to completely disable tooltips (they can be useful), so i’ll show you how to tell eclipse to bring up the tooltips only when you request them.

show tooltips only on request

to tell eclipse to only show tooltips on request, do the following: 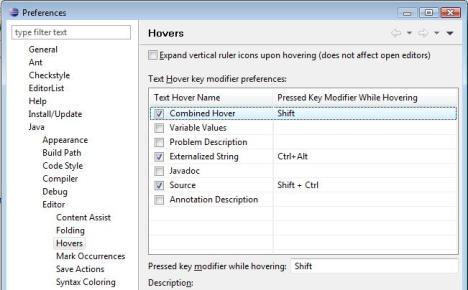 you should now notice the following:

other options – configure, disable or use the keyboard

you can, of course, choose your own modifier keys in preferences, but these are the ones i found that work the best, especially given that ctrl and a click is a way to go to an element’s declaration or implementation in eclipse. i’ve found shift to conflict the least with existing features and easy enough to use on a frequent basis. keep in mind that 2 hovers can’t share the same modifier key (which is why we reassigned the source hover to use shift+ctrl ).

you can also disable tooltips completely by deselecting the combined hover checkbox in the preference above, but i’ve found the shift key to be a nice middle ground so keep it enabled.

to get similar information using the keyboard, press f2 while the cursor’s positioned on the code. to show variable values in debug mode, press ctrl+shift+d . a nice tip if you’ve disabled tooltips completely.