In a previous post, I showed how to automate a PostgreSQL fault-tolerant cluster with Vagrant and Ansible.

This kind of setup makes our database cluster resilient to server failure and keeps the data available with no need for human interaction. But what about the apps using this database? Are they fault-tolerant too?

ORMs like Sequelize have read replication features, which allows you to define your primary and standby nodes in the database connection. But what happens if your primary node, which is responsible for write operations, is offline and your app needs to continue saving data on your database?

One way to solve this is by adding an extra layer to the system - a load balancing layer - using PostgreSQL third-party tools like pgbouncer or Pgpool-II or even a properly configured HAproxy instance. Besides the complexity brought by this method, you could also be introducing an undesired single point of failure.

Another way is using a floating IP address/virtual IP address to assign to the current primary database node, so the application knows which node it must connect to when performing write operations even if another node takes up the primary role.

We will be using Digital Ocean for server creation and floating IP assignment, but the strategy also works with other cloud providers who support floating IP.

Set up Your Cluster

To make configurations run smoother, add your public SSH key when creating the droplets. You can also use the key pair I provided on GitHub for testing purposes.

If you'd like to only use 2 droplets, you can ignore the third node as it will be a PostgreSQL witness.

Note: If you use an SSH private key which is shared publicly on the internet, your cluster can get hacked. 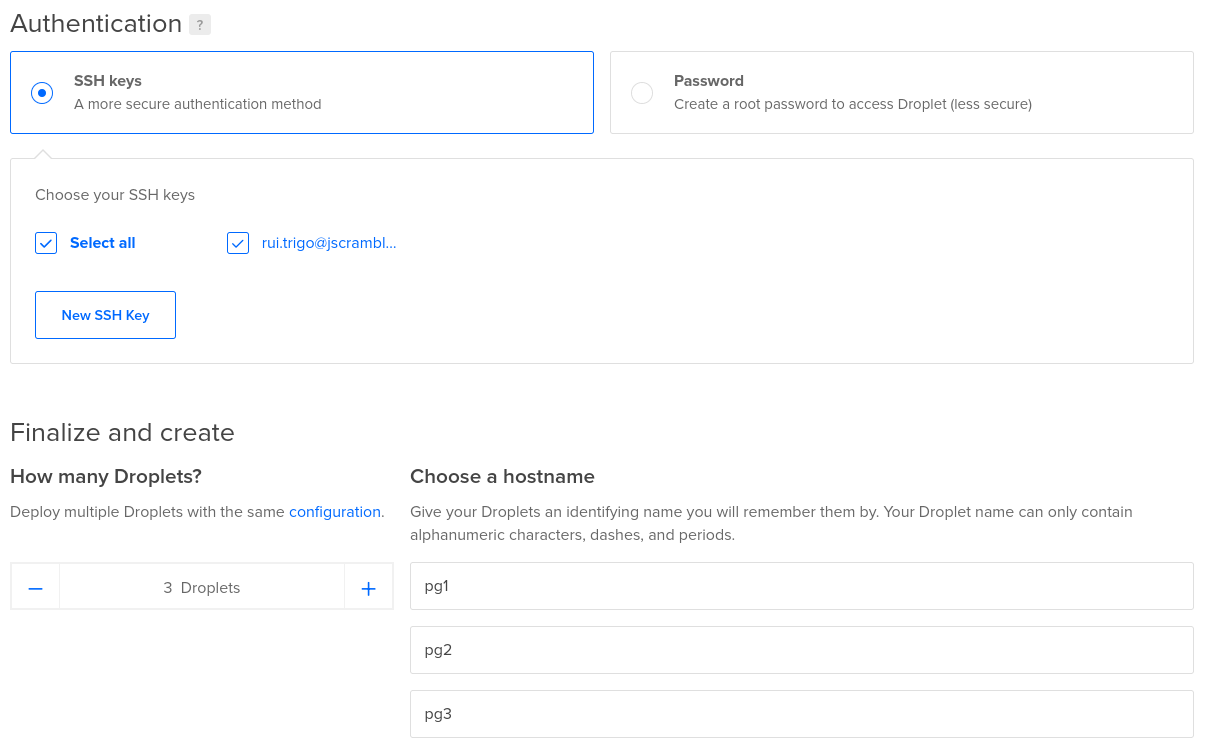 Assign a Floating IP To Your Primary Node

Create a floating IP address and assign it to your primary node (pg1).

As previously stated, you can use the Ansible playbook from the last post to speed up the configuration. Download it from GitHub and insert your gateway and droplets IPv4 addresses on group_vars/all.yaml:

Note: I am assuming you will run your app locally on your computer and it will connect to your droplets through your network gateway

If you don't know your current public gateway address, you can run:

Create an Ansible inventory file and add the playbook host_vars for each host. I named mine digitalocean:

Add the droplets to the list of SSH known hosts:

Now, run the playbook with:

Let's write a simple app that manipulates a countries table. Keep in mind pluralization in Sequelize for JavaScript objects and default database table names. Set it up with:

Now, edit the index.js with the following:

The code above created a Sequelize connection object named sequelize and configured our servers’ addresses in it. The connect function tests the connection to the database. Make sure your app can connect to it correctly before proceeding.

Country is our Sequelize model, a JavaScript object which represents the database table.
create_table(), insertCountry() and findAllCountries() functions are self-explanatory. They will be called through the run() function.

Run your app with:

This will create the countries table on the PostgreSQL database, insert a row in it, and read table data. Because of streaming replication, this data will automatically be replicated into the standby node.

If you perform this step, you'll need to revert the PostgreSQL promotion and go back to the cluster’s initial state. There are instructions for this in the mentioned tutorial.

Turn off your pg1 droplet (this can be done through Digital Ocean’s interface). Due to repmgrd configuration, the standby node (pg2) promotes itself to the primary role, so your database cluster keeps working. This promotion will make your app still able to read data, but not write. Proceed by reverting the cluster to the previous status, with pg1 being the primary node.

Use a Floating IP

To take advantage of floating IP, insert it into a variable and edit the write object of the sequelize object.

As we will configure pg2 node to interact with Digital Ocean and reassign the floating IP to its IPv4 address, we must configure doctl in this server. Access pg2 and do as following:

Note: If using in production, secure the API token variable in Digital Ocean’s CLI configuration script and be careful with reassigning script permissions.

Place the script below on /var/lib/postgresql/promote-standby.sh with execution privileges. It promotes the standby node to primary, validates doctl project configuration and reassigns the floating IP to pg2.

Add the Script To the Repmgr Promote Command

Unlike before, when you turn off pg1, pg2 not only promotes itself but also takes over the floating IP, which the app is currently using to perform write operations. As pg2 was already in the sequelize variable’s read array, it is now capable and the sole responsible for data reads and writes. Wait a minute for the promotion to happen and test the app again:

Picture yourself in a boat on a river (yes, it's a Beatles reference). If both your oars break loose and only one can be fixed on the spot, the boat motion will become defective and it will be hard to continue the trip.

In our specific case, before having a floating IP, your app would recover data read capability through database fault-tolerance behavior - but it wouldn't be able to perform writes in this condition. Now that your app follows the database's new primary node on automatic promotions, you can heal the cluster and revert it to the initial state in planned conditions and with no rush, as app features are safeguarded.

You can find the source code in this post on GitHub.

Published at DZone with permission of Rui Trigo. See the original article here.