Adoption of the IoT by businesses and enterprises has made mobile banking, online shopping, and social networking possible. While it has opened up a lot of opportunities for us, its not altogether a safe place because its anonymity also harbors cybercriminals. So, to protect yourself against the cyber threats of today, you must have a solid understanding of cybersecurity. This article will help you get a grip on cybersecurity fundamentals.

Let’s take a look at the topics covered in this cybersecurity fundamentals article:

The History of Cybersecurity

About forty years ago, words like worms, viruses, trojan-horse, spyware, malware weren’t even a part of conventional information technology (IT) vocabulary. Cybersecurity only came into existence because of the development of viruses. But how did we get here?

The history of cybersecurity began as a research project. In the 1970s, Robert Thomas, a researcher for BBN Technologies in Cambridge, Massachusetts, created the first computer “worm.” It was called The Creeper. The Creeper, infected computers by hopping from system to system with the message “I’M THE CREEPER: CATCH ME IF YOU CAN.” Ray Tomlinson, the inventor of email, created a replicating program called The Reaper, the first antivirus software, which would chase Creeper and delete it.

Late in 1988, a man named Robert Morris had an idea: he wanted to test the size of the Internet. To do this, he wrote a program that went through networks, invaded Unix terminals, and copied itself. The Morris worm was so aggressive that it slowed down computers to the point of being unusable. He subsequently became the first person to be convicted under the Computer Fraud and Abuse Act.

From that point forward, viruses became deadlier, more invasive, and harder to control. With it came the advent of cybersecurity.

Cybersecurity is the body of technologies, processes, and practices designed to protect networks, computers, programs, and data from attack, damage, or unauthorized access.

The term cybersecurity refers to techniques and practices designed to protect digital data — the data that is stored, transmitted, or used on an information system. After all, that is what a criminal wants: data. The network, servers, and computers are just mechanisms to get to the data. Effective cybersecurity reduces the risk of cyber-attacks and protects organizations and individuals from the unauthorized exploitation of systems, networks, and technologies.

Robust cybersecurity implementation is roughly based around three key terms: people, processes, and technology. This three-pronged approach helps organizations defend themselves from both highly organized attacks and common internal threats, such as accidental breaches and human error.

The attacks evolve every day. As attackers become more inventive, it is critical to properly define cybersecurity and understand cybersecurity fundamentals.

Why Is Cybersecurity Important?

Listed below are the reasons why cybersecurity is so important in what’s become a predominantly digital world:

Because of the above reasons, cybersecurity has become an important part of the business, and the focus, now, is on developing appropriate response plans that minimize the damage in the event of a cyber attack. But, an organization or an individual can develop a proper response plan only when he has a good grip on cybersecurity fundamentals.

Now that we know what cybersecurity is and why it is important, let’s take a look at fundamental objectives of cybersecurity.

Let’s explore these components and some of the information security measures which are designed to assure the safety of each component. 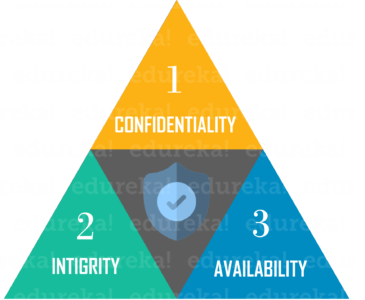 Standard measures to establish confidentiality include:

Integrity refers to protecting information from being modified by unauthorized parties. It is a requirement that information and programs are changed only in a specified and authorized manner. Challenges that could endanger integrity include turning a machine into a “zombie computer,” embedding malware into web pages.

Standard measures to guarantee integrity include:

Availability is making sure that authorized parties are able to access the information when needed. Data only has value if the right people can access it at the right time. Information unavailability can occur due to security incidents such as DDoS attacks, hardware failures, programming errors, and human errors.

Standard measures to guarantee availability include:

All cyber attacks have the potential to threaten one or more of the three parts of the CIA triad. Confidentiality, integrity, and availability all have to work together to keep your information secure. So, it’s important to understand what the CIA Triad is and how it is used to plan and implement a quality security policy, while understanding the various principles behind it.