An example of a Data Grid.

It is hard to imagine a modern web app that does not involve a data grid component to display and filter the data. In this article, we compare the performance of some of the most popular JavaScript grid components on the market, measuring both the initial render time and the scrolling performance. We also describe the methodology used and there is a GitHub repo where you can see the code used.

You may also like: Examples of Data Grids, Compute Grids, Service Grids, and Executing SQL Queries

The following popular data grids were used in this comparison:

To make the comparison as fair as possible the following actions were taken:

JavaScripts performance.now() was used to measure time in the benchmarks.

The following steps were taken to measure initial rendering:

A small utility class was used to achieve this, the important part of its source:

And example of its usage:

To measure scroll performance, two utility classes are used. One that makes the grid scroll on a timer and one that measures the FPS. Below you can see the source for the scroller:

It either directly scrolls an element or provides a scrollFn callback for grids that do not have native scrolling. Scrolling starts at 5px per update, accelerating all the way up to 1000px, this way mimicking flick scrolling on a touchpad or an unlocked mouse wheel. At a predefined distance of 50,000px, the scrolling stops and a callback is called.

Please note that programmatically triggering the scroll-like this makes it happen on the main thread, in sync with the UI. When an actual user scrolls using the touchpad, it happens async on another thread. The difference might not be obvious, but because it is done programmatically here the UI will always be up to date. Only it will happen faster or slower depending on the grid. In real life, scrolling is not blocked by UI updates which leads to whiteouts instead.

To measure FPS (frames per second) a utility class that utilizes requestAnimationFrame is used. It measures the time taken to reach the scroll destination, counts the number of frames run and calculates FPS. Source redacted to save some space:

First up, initial rendering. Scroll down for the scroll performance results.

First the results for initial rendering, without locked/fixed/pinned columns: 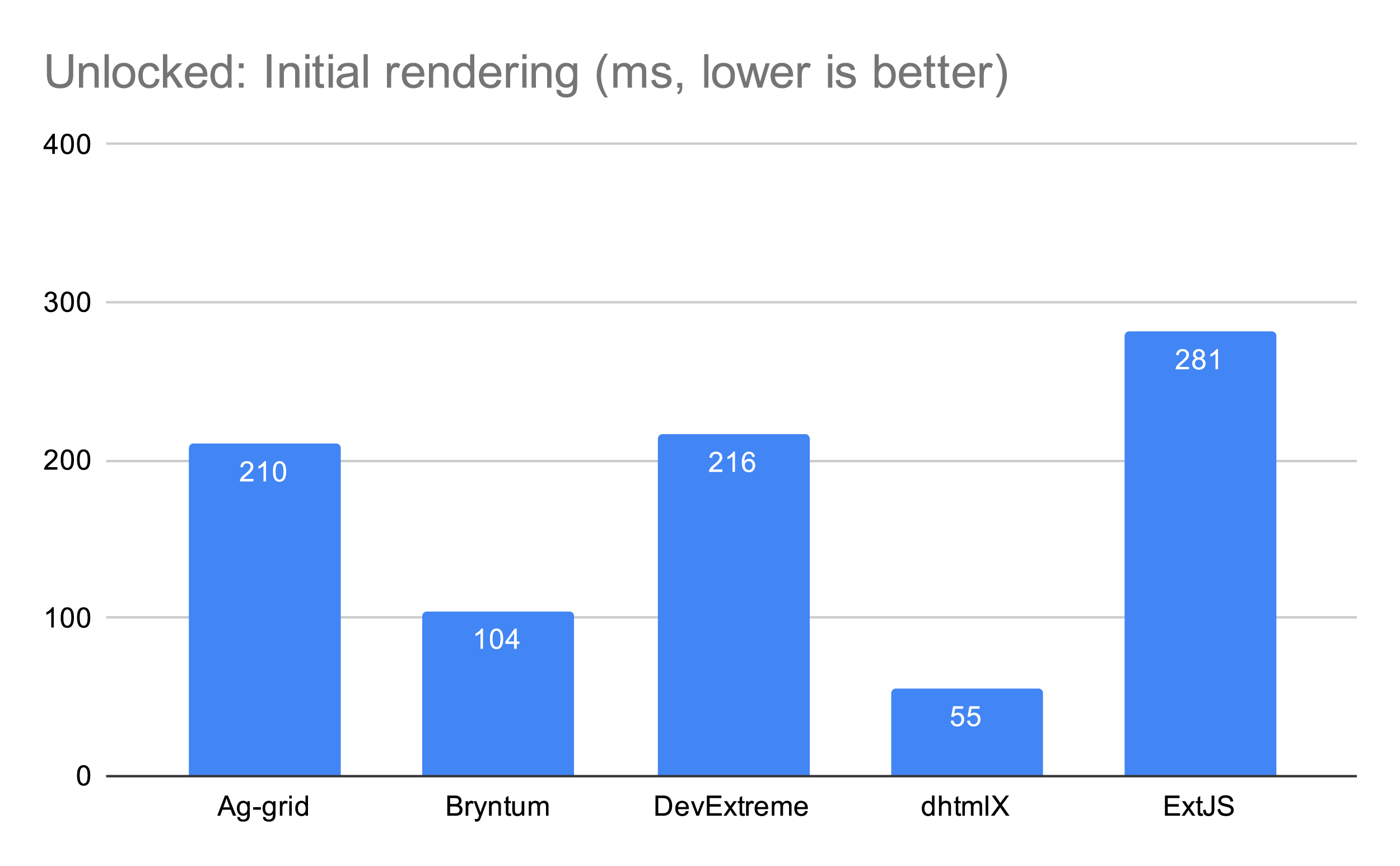 As can be seen above, dhtmlX is the fastest for the initial rendering phase, with Bryntum as the clear runner-up. For all practical applications though, the difference between the best and the worst, in this case, is negligible. A real world application loading and displaying 10,000 records will spend much more time retrieving the data from the backend than the time it takes to display it.

Reviewing the results for initial rendering with locked/fixed/pinned columns we can see that the relative ranking is the same, but it takes a wee bit longer to render: 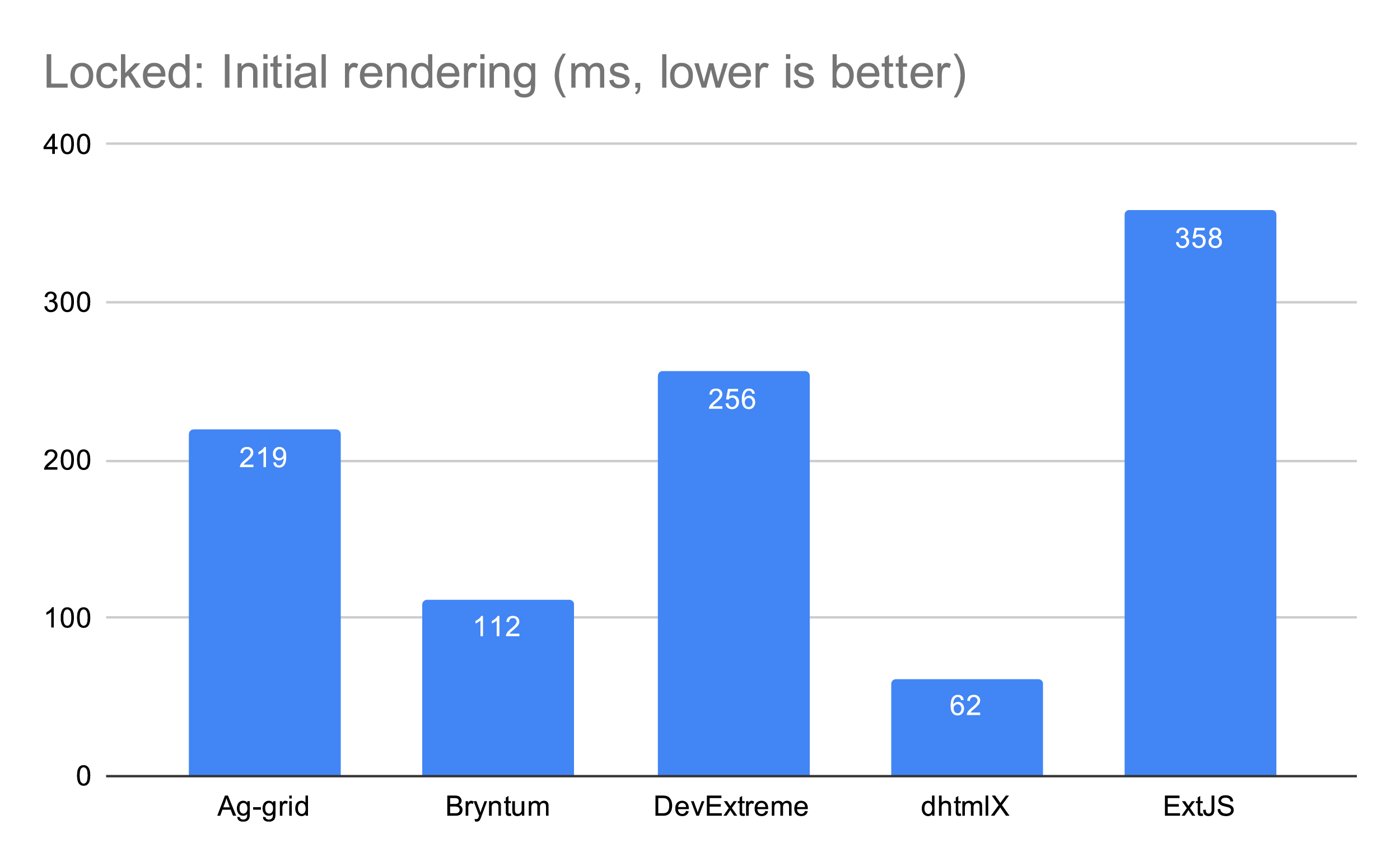 ExtJS renders pretty much slower in this case, but it is not noticeable unless you measure it. Still fast enough across the board.

When it comes to FPS there are bigger differences between the grids. Lets first look at the scenario without locked/fixed/pinned columns: 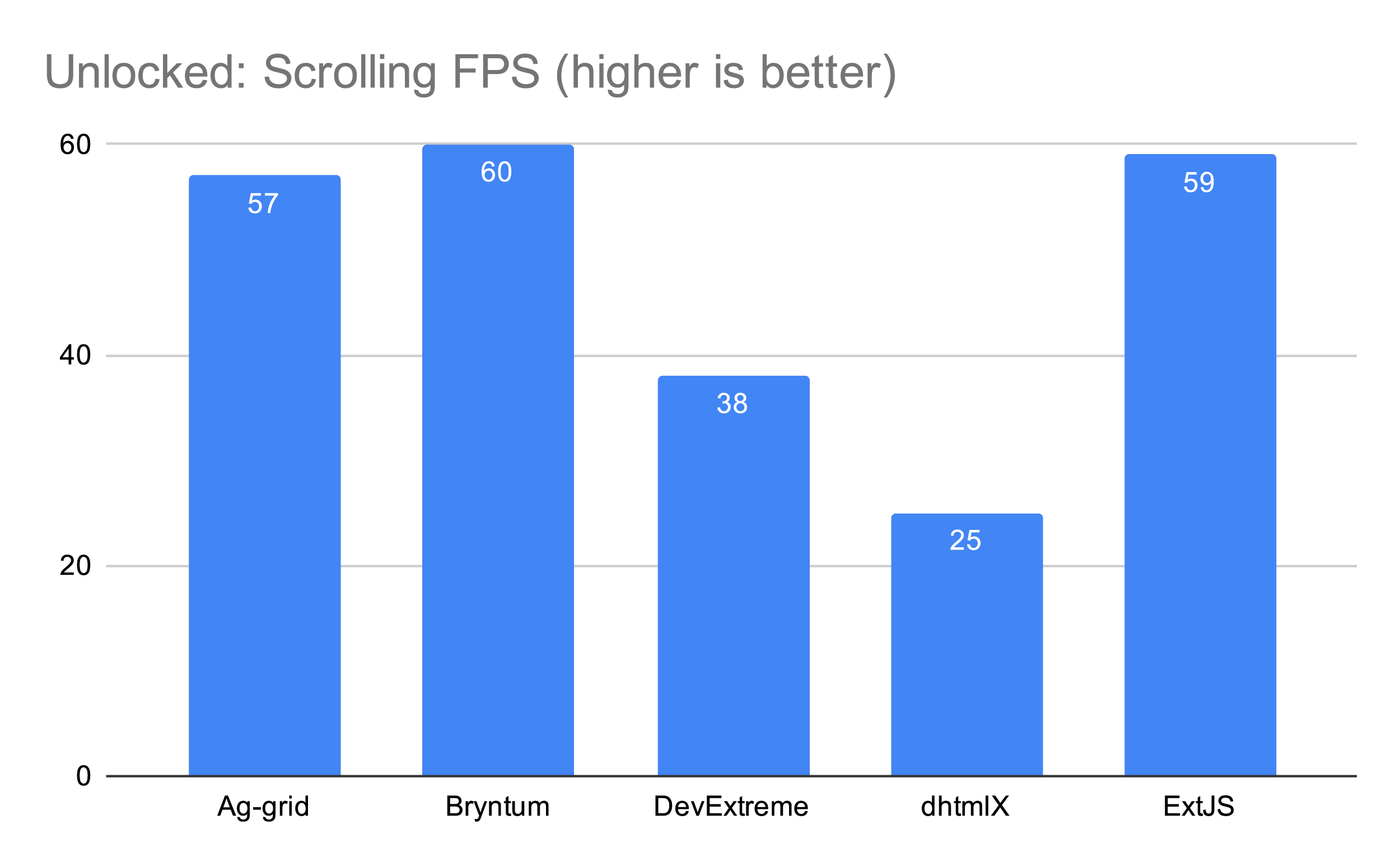 Ag-grid, Bryntum and Ext JS are pretty much tied for the lead, averaging at around 60 frames per second which is as good as it gets! DevExtreme and dhtmlX lag behind at 38 and 25 FPS respectively.

In contrast to the initial rendering performance, these performance differences are easy to spot with the eye. Scrolling fast in a grid that has low FPS leads to whiteouts and poor user experience.

Now for the final round of results, we have the grids with locked/fixed/pinned columns. This case is especially interesting for anyone building or using Scheduler or Gantt components as such components always have a fixed left section with the tabular data. 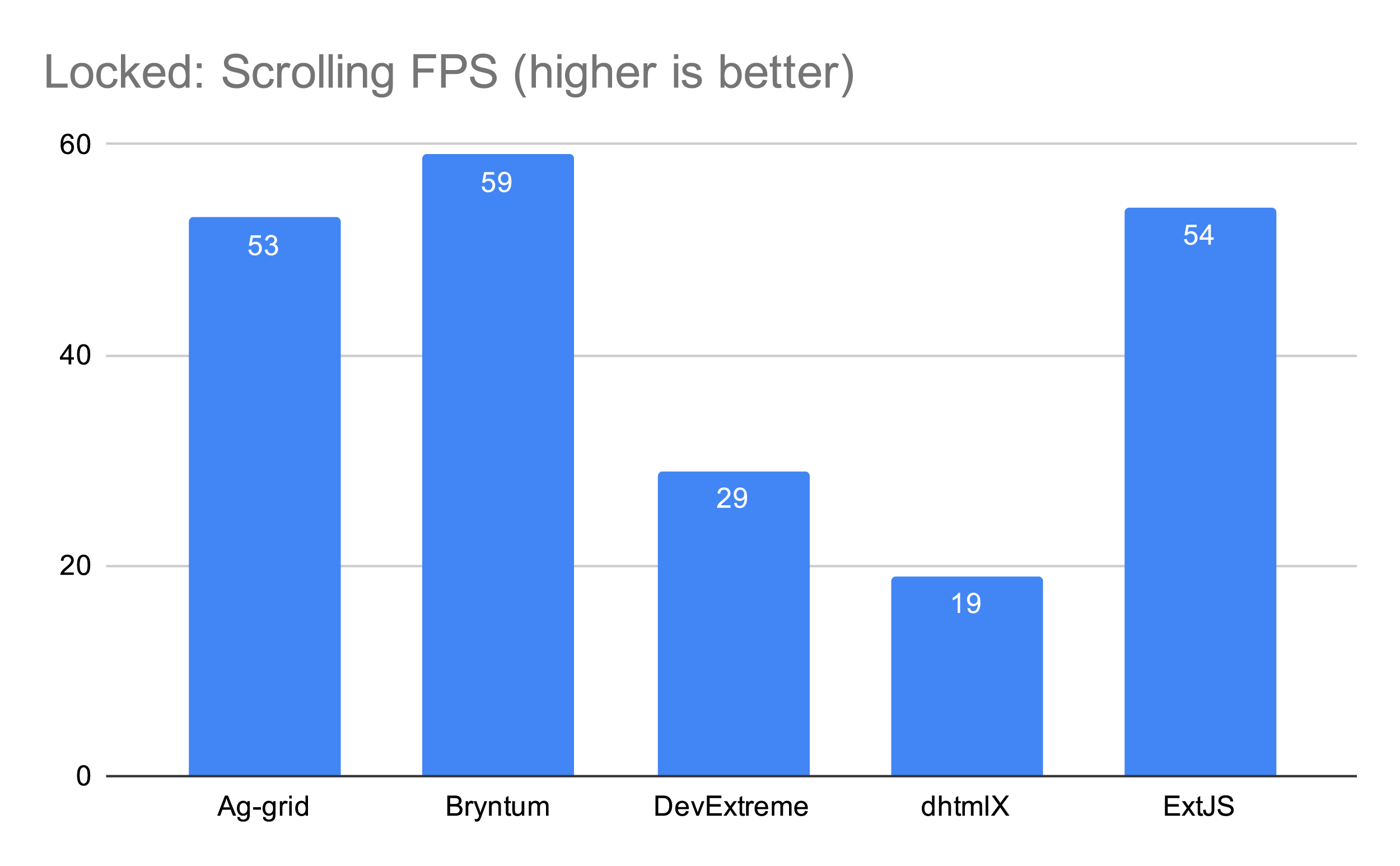 Bryntum almost manages to maintain 60 frames per second, while Ag-grid and ExtJS are a few frames behind. Still very fast though, kudos to the developers of both libraries. DevExtreme and dhtmlX lag further behind, probably because of how locked sections are implemented in those grids.

This article is not comparing features of the grids, but if you care about performance as much as we do then this post might be helpful when picking which grid to use. Bryntum Grid performs good both initially and while scrolling, but as mentioned above the initial rendering time is good enough across the board. With that in mind it is hard to pick a single winner, so let's call this a tied 1st place between Ag-grid, Bryntum and Ext JS.

All measurements were done in the same way for each grid and results are reported honestly, but I am a developer at Bryntum. For transparency, all the code used is available on GitHub. Feel free to try it out yourself: https://github.com/bryntum/grid-performance

Why You Need an Application Performance Monitoring (APM) Tool