The concepts and architectures of a data warehouse, a data lake, and data streaming are complementary to solving business problems. Storing data at rest for reporting and analytics requires different capabilities and SLAs than continuously processing data in motion for real-time workloads. Many open-source frameworks, commercial products, and SaaS cloud services exist. Unfortunately, the underlying technologies are often misunderstood and overused for monolithic and inflexible architectures, and vendors pitch for the wrong use cases. Let’s explore this dilemma in a blog series. Learn how to build a modern data stack with cloud-native technologies. 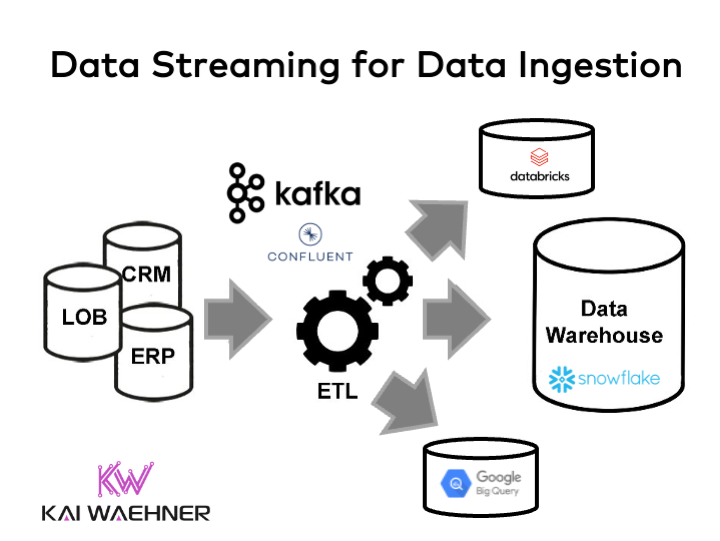 This blog series explores concepts, features, and trade-offs of a modern data stack using a data warehouse, data lake, and data streaming together:

Stay tuned for a dedicated blog post for each topic as part of this blog series. I will link the blogs here as soon as they are available (in the next few weeks).

Reliable and scalable data ingestion is crucial for any analytics platform, whether you build a data warehouse, data lake, or lakehouse.

Almost every major player in the analytics space re-engineered the existing platform to enable data ingestion in (near) real-time instead of just batch integration.

Just getting data from A to B is usually not enough. Data integration with Extract, Transform, Load (ETL) workflows connects to various source systems and processes incoming events before ingesting them into one or more data sinks. However, most people think about a message queue when discussing data ingestion. Instead, a good data ingestion technology provides additional capabilities:

Kafka is more than just data ingestion or a message queue. Kafka is a cloud-native middleware: 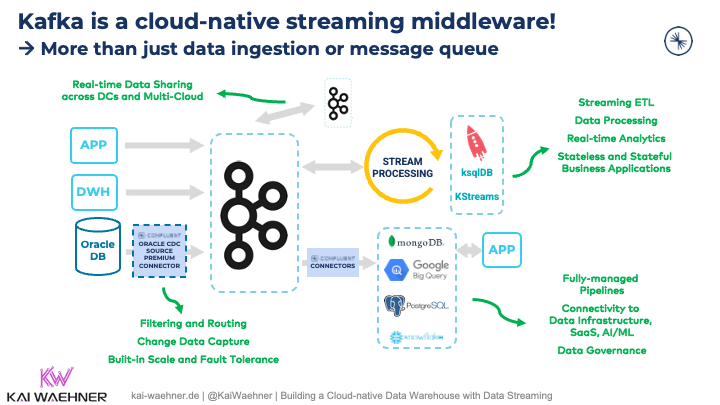 One common option is to run ETL workloads in the data warehouse or data lake. A message queue is sufficient for data ingestion. Even in that case, most projects use the data streaming platform Apache Kafka as the data ingestion layer, even though many great Kafka features are disregarded this way.

Instead, running ETL workloads in the data ingestion pipeline has several advantages:

Data Integration at Rest or in Motion?

ETL is nothing new. Tools from Informatica, TIBCO, and other vendors provide great visual coding for building data pipelines. The evolution in the cloud brought us cloud-native alternatives like SnapLogic or Boomi. API Management tools like MuleSoft are another common option for building an integration layer based on APIs and point-to-point integration.

The enormous benefit of these tools is a much better time-to-market for building and maintaining pipelines. A few drawbacks exist, though:

The great news is that you have the freedom of choice. If the heart of the infrastructure is real-time and scalable, then you can add not just scalable real-time applications but any batch or API-based middleware:

Point-to-point integration via API Management is complementary to data streaming, not competitive.

Data Mesh is the latest buzzword in the software industry. It combines domain-driven design, data marts, microservices, data streaming, and other concepts. Like Lakehouse, Data Mesh is a logical concept, NOT physical infrastructure built with a single technology! I explored what role data streaming with Apache Kafka plays in a data mesh architecture.

In summary, the characteristics of Kafka, such as true decoupling, backpressure handling, data processing, and connectivity to real-time and non-real-time systems, enable the building of a distributed global data architecture.

Here is an example of a data mesh built with Confluent Cloud and Databricks across cloud providers and regions: 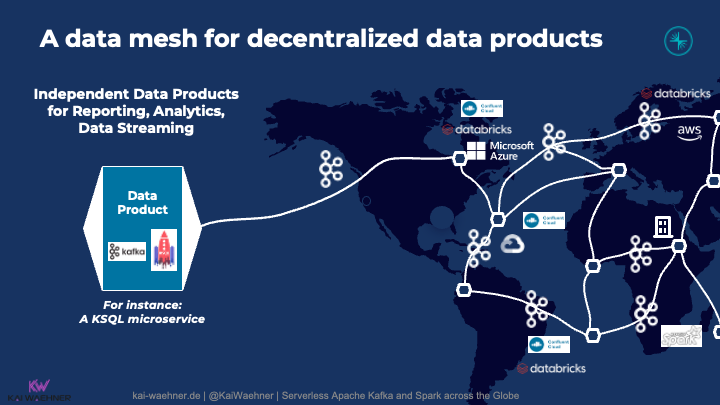 Data streaming as the data ingestion layer plays many roles in a multi-cloud and/or multi-region environment:

The power of data streaming becomes more apparent in this example: Data ingestion or a message queue alone is NOT good enough for most "data ingestion projects"!

Apache Kafka is the de facto standard for data streaming, and a critical use case is data ingestion. Kafka Connect enables reliable integration in real-time at any scale. It automatically handles failure, network issues, downtime, and other operations issues. Search for your favorite analytics platform and check the availability of a Kafka Connect connector. The chances are high that you will find one.

Critical advantages of Apache Kafka compared to other data ingestion engines like AWS Kinesis include:

Kafka provides two capabilities that many people often underestimate in the beginning (because they think about Kafka just as a message queue):

The key difference from other ETL tools is that Kafka eats its own dog food:

Kafka as Cloud-Native Middleware; NOT iPaaS 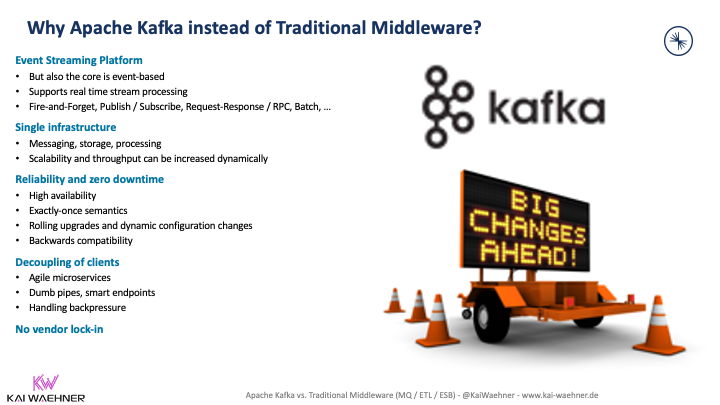 Some consider data streaming an integration platform as a service (iPaaS). I can't entirely agree with that. The arguments are very similar to saying Kafka is an ETL tool. These very different technologies shine with other characteristics (and trade-offs).

The developer can use the same Kafka Connect APIs for different connectors. Under the hood, the implementation looks very different to serve different needs and SLAs.

Both use the dedicated Kafka Connect connector on the high-level architecture diagram. Under the hood, ingestion speed, indexing strategy, delivery guarantees, and many other factors must be configured depending on the project requirements and data sink capabilities.

An Elastic Data Stream lets you store append-only time series data across multiple indices while giving you a single named resource for requests. Data streams are well-suited for logs, events, metrics, and other continuously generated data. You can submit indexing and search requests directly to a data stream. The stream automatically routes the request to backing indices that store the stream’s data. A Kafka data stream is the ideal data source for Elastic Data Streams.

Confluent, in conjunction with Databricks, is another excellent example. Many people struggle to explain both vendors' differences and unique selling points. Why? Because the marketing looks very similar for both: Process big data, store it forever, analyze it in real-time, deploy across multi-cloud and multi-region, and so on. The reality is that Confluent and Databricks overlap only ~10%. Both complement each other very well.

Confluent's focus is to process data in motion. Databricks' primary business is storing data at rest for analytics and reporting. You can store long-term data in Kafka (especially with Tiered Storage). Yes, you can process data with Databricks in (near) real-time with Spark Streaming. That's fine for some use cases, but in most scenarios, you (should) choose and combine the best technology for a problem.

Here is a reference architecture for data streaming and analytics with Confluent and Databricks: 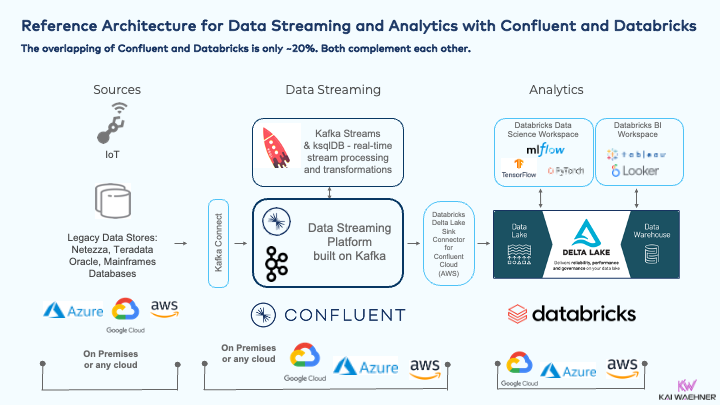 Confluent and Databricks are a perfect combination of a modern machine learning architecture:

I hope it is clear that data streaming vendors like Confluent have very different capabilities, strengths, and weaknesses than data warehouse vendors like Databricks or Snowflake.

How to Build a Cloud-Native Lakehouse With Kafka and Spark?

Databricks coined Lakehouse to talk about real-time data in motion and batch workloads at rest in a single platform. From my point of view, the Lakehouse is a great logical view. But there is no silver bullet! The technical implementation of a Lakehouse requires different tools in a modern data stack.

In June 2022, I presented my detailed perspective on this discussion at Databricks’ Data + AI Summit in San Francisco. Check out my slide deck "Serverless Kafka and Spark in a Multi-Cloud Lakehouse Architecture".

Data Streaming Is Much More Than Data Ingestion Into a Lakehouse

Examples with vendors like Confluent, Databricks, and Elasticsearch showed how data streaming helps solve many data integration challenges with a single technology.

Nevertheless, there is no silver bullet. A modern lakehouse leverages a best of breed technologies. No single technology can be the best to handle all kinds of data sets and communication paradigms (like real-time, batch, and request-response).

For more details, browse other posts of this blog series:

How do you combine data warehouse and data streaming today? Is Kafka just your ingestion layer into the data lake? Do you already leverage data streaming for additional real-time use cases? Or is Kafka already the strategic component in the enterprise architecture for decoupled microservices and a data mesh? Stay Tune.