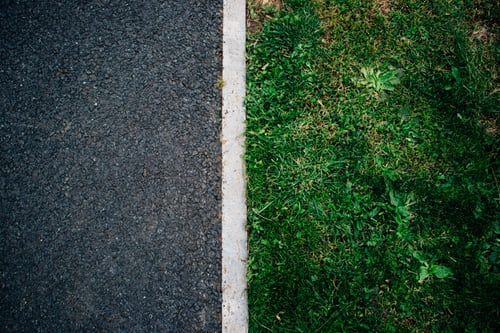 Sometimes, people are quite confused over these two concepts (SQL ORDER BY vs. GROUP BY), and the reason behind this confusion is a lack of understanding of both concepts. While both of them are used to arrange data based on their values, their use cases vastly differ from each other. If we learn both these concepts properly, the confusion will naturally go away.

In this article, I used an interesting database published here. The data set contains more than 2000 craft beers and 500 breweries used in the United States. The data is included in CSV files, which you can easily import to any of your databases using a GUI tool. One of my colleagues has shown how to do so in an example of Vertabelo Academy’s survey data.

You may also enjoy:  How SQL DISTINCT and ORDER BY Are Related

There are two tables in this dataset: beers and breweries. Let’s see the sample dataset from the beers table to get a better picture of it. 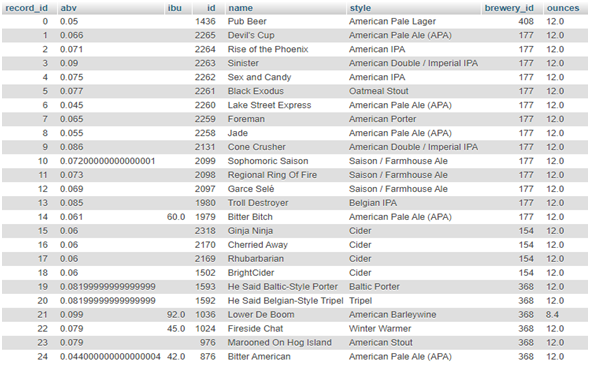 Our first topic is ORDER BY. Before trying to understand the difference between GROUP BY and ORDER BY, let’s see how the SELECT command works.

Let's SELECT the name, city, and state from every record in the breweries table.

When you execute the above command, you will get something like the following: 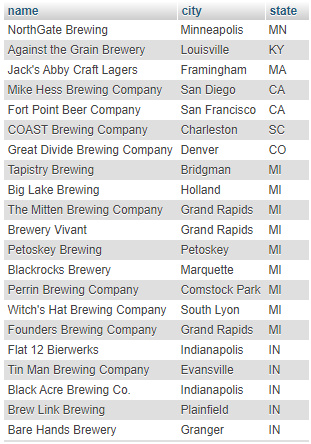 You can see that these results are not ordered according to their names. The default order for a SELECT statement is non-deterministic, which means the order of results can differ anytime you run your code.

However, a non-deterministic order is usually not what we want. For example, suppose you’d like to order results by ascending or descending order of their state column; in that case, you would need the ORDER BY command. All you have to do is use the ORDER BY clause like this: 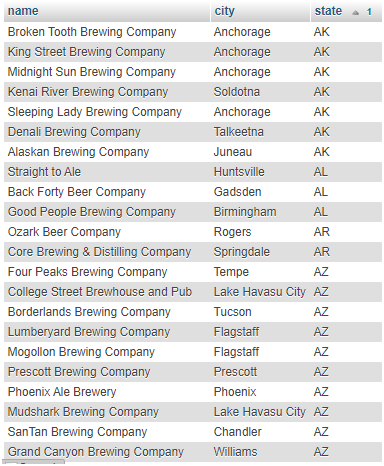 Similarly, you can get results in the descending order of the state as well. 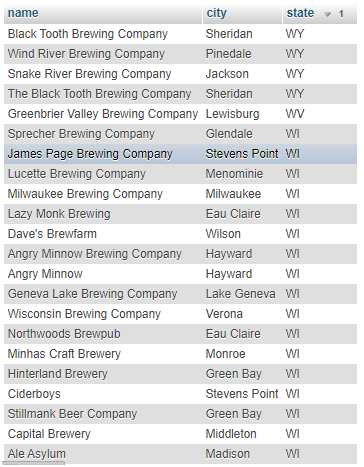 You can use ORDER BY in two or more columns. Check the following query: 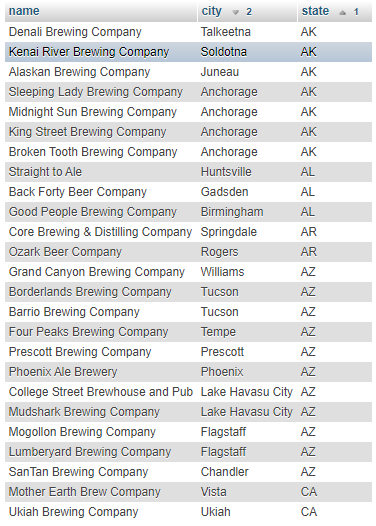 Now, the interesting thing is that someone who doesn’t know how to use GROUP BY much could use ORDER BY to analyze data. For example, suppose that you want to find out how many breweries are there in a given state. What you could do is get the results ordered by their states. This will give you a nice grouped result from which you can manually count the number of breweries from a given state.

Therefore, someone who doesn’t have a strong grasp of GROUP BY might think that ORDER BY is an excellent way to group the same data. That idea is not wrong. If you want to display data in a nice grouped way, ORDER BY is a good bet.

GROUP BY is not a way to display data in groups, but it is more of a way to analyze data in groups. To further comprehend SQL ORDER BY vs. GROUP BY, let’s have a look at GROUP BY in more detail.

In most texts, GROUP BY is defined as a way of aggregating records by the specified columns which allow you to perform aggregation functions on non-grouped columns (such as SUM, COUNT, AVG, etc). In other words, the GROUP BY clause’s purpose is to summarize unique combinations of columns values.

A few examples will further clarify:

The above SQL query will generate the following output

So, let's see what has happened here. This query has returned one result from each style value. That means SQL first makes groups from the same style values and returns one row representing the group.

And what is the exact use of GROUP BY? Of course, you can use GROUP BY to find distinct values. But SQL has a DISTINCT keyword specifically for that. The real importance of GROUP BY can be seen when you use it with aggregate functions like SUM(), COUNT(). To understand it better, execute the following SQL query:

It will generate the following result: 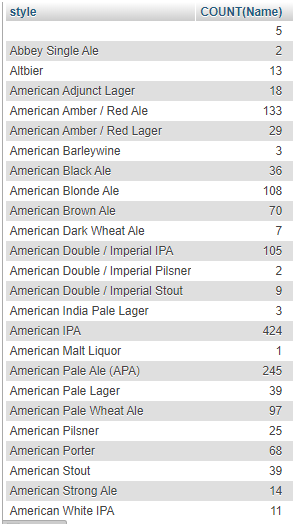 Here, SQL first groups results based on the style column. Then, it checks how many names are there in each group and returns the style values and the count of names for each style.

If you look closely, you may notice that the results are already ordered in ascending order. This situation occasionally tricks people into believing that GROUP BY sorts results. In actuality, there is no guarantee that GROUP BY will display results in ascending order. If you need results in a specific order, you have to do it yourself like below:

Therefore, GROUP BY works nicely along with ORDER BY.

So, now you know how to use GROUP BY to count a set of values belongs to a certain group. I will give you two more real-world examples to understand the use of GROUP BY.

Let’s take this lesson a bit further to increase your knowledge of GROUP BY. You can also group results using two columns. For example, let’s group the beers table based on style and brewery_id.

This SQL query will divide style groups further using brewery_id. When you execute it, you will get the following result: 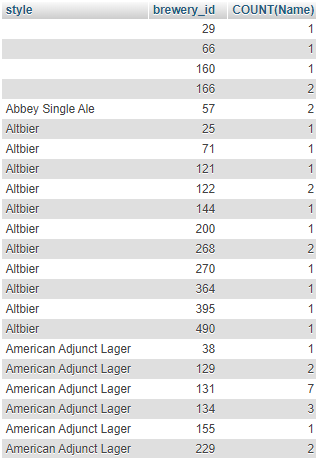 In this article, I explained the difference between ORDER BY and GROUP BY. ORDER BY sorts data based on data of a column. Of course, as a result of sorting, data from the same values will be brought together as a group, which will make it easy for you to manually analyze later. But GROUP BY is the SQL way to analyze similar data.

There is no real use of GROUP BY without aggregation functions. Sometimes, GROUP BY can return results in sorted order, but you shouldn’t rely on it. The order in which results are returned is non-deterministic and depends on how the db engine executes the query.

After reading this article, you should be able to use GROUP BY and ORDER BY with more confidence. If you want to refine your knowledge of SQL ORDER BY vs. GROUP BY, check this practice set — it contains a special section dedicated to this subject.

An Introduction to Join Ordering

Published at DZone with permission of Shanika WIckramasinghe. See the original article here.