With the release of Spark 3.0, big improvements were implemented to enable Spark to execute faster and there came many new features along with it. Among them, dynamic partition pruning is one. Before diving into the features which are new in Dynamic Partition Pruning let us understand what is Partition Pruning.

In standard database pruning means that the optimizer will avoid reading files that cannot contain the data that you are looking for. For example,

In this simple query, we are trying to match and identify records in the Students table that belong to subject English. This translates into a simple form that is a filter on top of a scan which means whole data gets scanned first and then filtered out according to the condition.

Now, most query optimizers try to push down the filter from the top of the scan down as close as possible to the data source, in order to be able to avoid scanning the full data set. 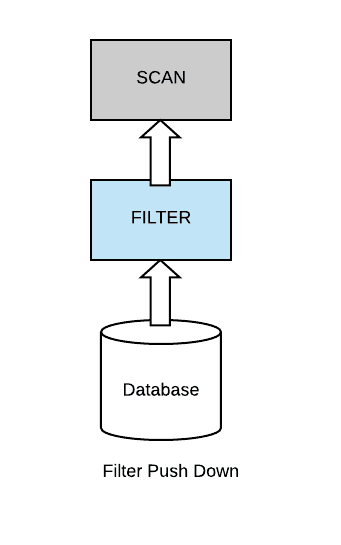 In the partition pruning technique, it follows the filter push down method and the data set is partitioned. Because in that case, if your query has a filter that’s on partition columns, you can actually be able to skip complete sets of partition files.

However, in reality data engineers don’t just execute a single query, or single filter in their queries, and the common case is that they actually have dimensional tables, small tables that they need to join with a larger fact table. So in this case, we can no longer apply static partition pruning because the filter is on one side of the join, and the table that is more appealing and more attractive to prune is on the other side of the join. So, we have a problem now. 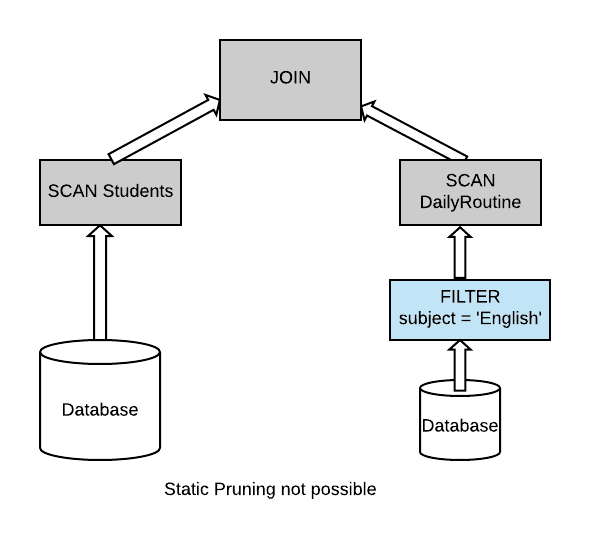 Some may suggest that we can join the dimension tables with the fact table beforehand. In this way, we can still trigger static pruning over a single table. And then, they can execute their filters in separate queries as shown below. 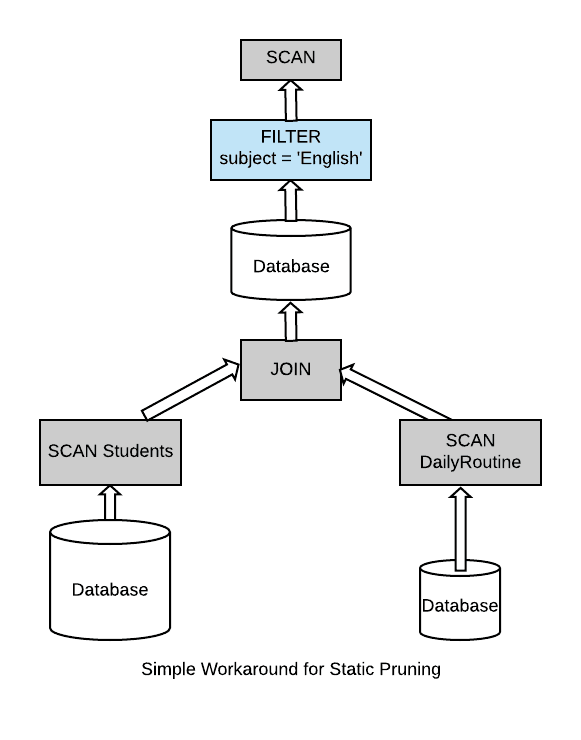 There are obvious downsides to this approach because first we have to execute this quite expensive join. We are duplicating the data, because we have to generate another intermediate table. This table can be quite wide because we take a bunch of smaller tables that we are joining together with a large table. And not only it’s wide but it’s actually extremely difficult to manage in the face of updating the dimensional tables. So whenever we are making a change we actually have to re trigger this whole pipeline over again.

In this blog we are going to learn a radically different approach in which we are going to do filtering using dynamic pruning. The basic goal of this optimization is to be able to take the filtering results from the dimension table. Then use them directly to limit the data that we will get from the fact table.

In Spark SQL, users typically submit their queries from their favorite API in their favorite programming language, so we have data frames and data sets. Spark takes this query and translates it into a digestible form, which we call the logical plan of the query. During this phase, Spark optimizes the logical plan by applying a set of transformations which are rule-based transformations such as column pruning, constant folding, filter push down. And only later on, it will get to the actual physical planning of the query.

During the physical planning phase spark generates an executable plan. This plan distributes the computation across clusters of many machines. Here I’m going to explain how dynamic partition pruning can be implemented at the level of logical planning. Then we will look into how we can further optimize it during physical planning.

Let’s start with the optimization opportunities that we have at the level of logical planning. Let us consider a data set that is partitioned across multiple files. And each partition will be differ by a particular color. On the opposite side, we will have a smaller table, which is a dimension table that is not necessarily partitioned. And then we have the typical scan operators on top of these data sets.

Whenever we are filtering the dimension table, consider an example in which only rows that correspond to two partitions on the opposite side of the join are actually relevant. So when we will complete the final join operation, only those two partitions will actually be retained by the join.

And in this way we can figure out that when we are planning the fact side of the join. And we are able to figure out which data this join requires. This is a simple approach. 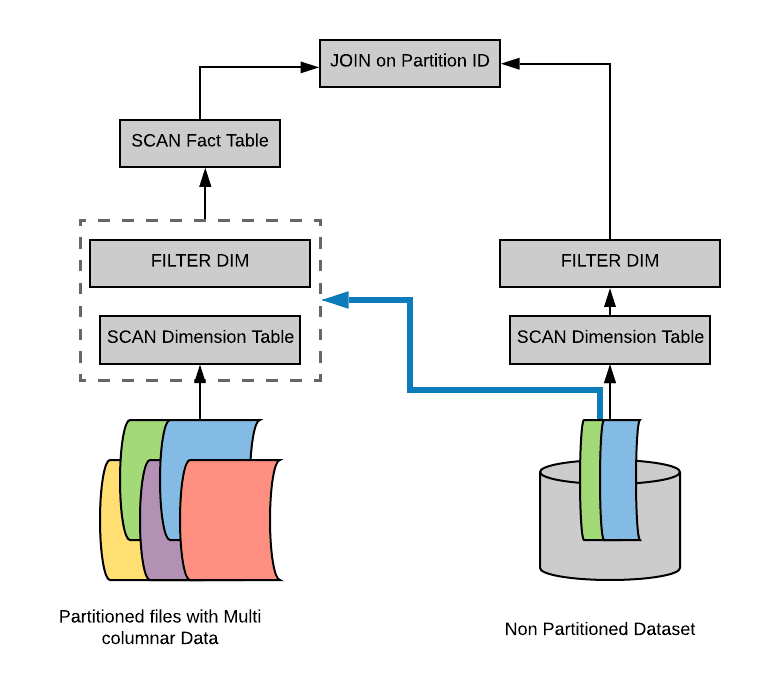 But however it can actually be expensive. We need to get rid of this sub query duplication and figure out a way to do it more efficiently. In order to do that, we’re going to take a look at how spark executes a join during the physical planning and how Spark transforms the query during this physical planning stage.

If the dimension table is small, then it’s likely that Spark will execute the join as a broadcast hash join. Whenever we have two tables that are hash joins, there are a number of things that are happening: 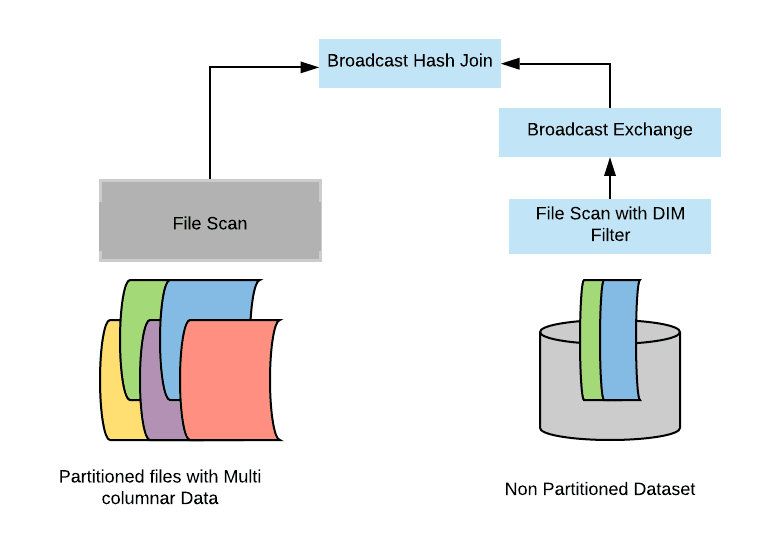 Now there is clearly a natural barrier between the two stages. So first, we are computing the broadcast side of the join. We are distributing it and only later on, do we start probing and executing the actual join. This is quite interesting, and we want to be able to leverage this into our optimization because this is quite exactly what we have mimicked with the level of logical planning with the sub query.

So here’s what we are actually going to do. We are intercepting the results of the build side – the broadcast results. And we are going to take them directly and plug them in as a dynamic filter inside the scanner on top of the fact table. So this is actually a very effective and optimized version of dynamic partition pruning. 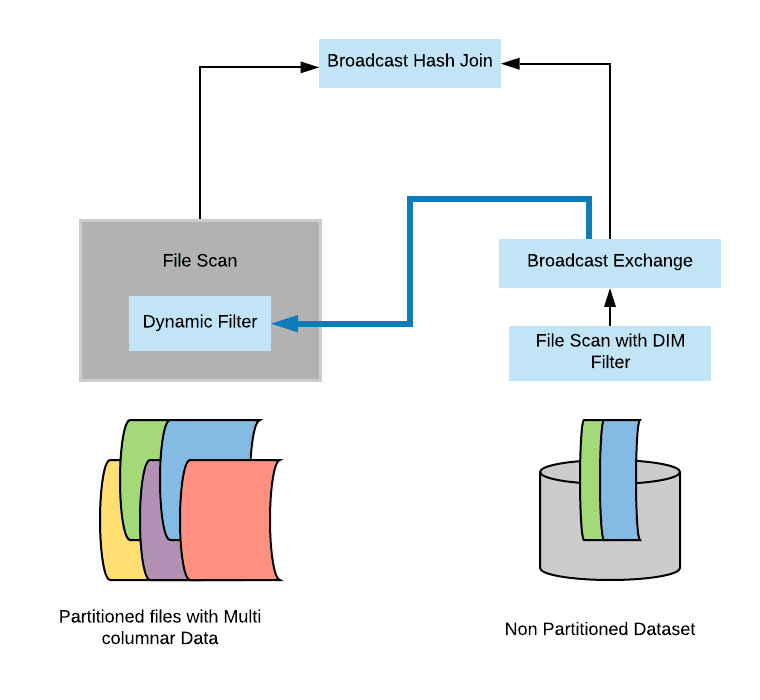 To summarize, in Apache sparks 3.0, a new optimization called dynamic partition pruning is implemented that works both at:

I hope this blog was helpful.