Join For Free
electric cloud has recently developed several unique capabilities for its software production suite, and now the company has built these technologies into the newest versions of their electricaccelerator and electriccommander products, which were released this week.  electricaccelerator 5.0 has added two major features.  the "electrify" feature can now parallel process virtually any software production task, and the new subbuild feature avoids unnecessary builds.  electriccommander 3.5 features a new, extensible interface for managing and automating a shop's existing tool infrastructure.

another innovative addition to accelerator is the subbuilds feature.  first previewed in electric cloud's free spark build tool ,  subbuilds allow unnecessary build avoidance.  subbuilds are able to skip large swaths of the build tree by building only the relevant pieces to the current work.  the result is fewer broken builds and the ability to compile and test quickly and frequently without affecting the rest of the team.

the dependency graph below shows the agent component (util, xml, http libraries, and the agent application code) as solid.  sparkbuild can recognize that only this component needs to be rebuilt. 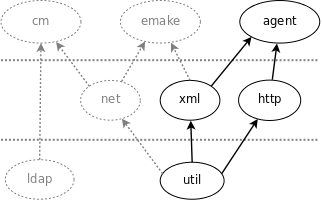 electricaccelerator 5.0 now supports build tools such as msbuild and scons along with homegrown systems.  teams that standardize on scons, for example, can use less hardware and provide faster builds than individual mutli-core servers by applying the benefits of centralization.  the virtualization capabilities of accelerator also allow easier support for multiple configurations.

electriccommander 3.5
electriccommander is a web-based application for defining and executing distributed processes in the build-test-deploy cycle.  in a development environment using many disparate tools, commander 3.5 can remove the need to learn multiple interfaces, and it manages those tools from a central, custom ui.  electriccommander 3.5 can be configured to extract and display data from the defect tracker, relevant build results, and test results.  this lets build managers track the status of fixes and be notified when qa resolves the issue.  the commander ui's custom, dynamic screens can help developers create and execute a build or test request using the right parameters.  commander 3.5 can give developers a custom interface based on their role in the production cycle.  3.5 also provides tools to create custom plug-ins for third-party integrations.