This post explains the basics of Events and Delegate in .NET and, most importantly, explains what is difference between both.

Both Event and Delegate is based on overserved pattern of GOF, which is based on giving notification of change in one thing (object) to all others who is interested in change. Below image is graphical interpretation of same. 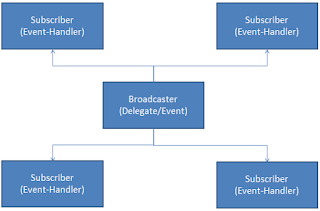 To understand delegates in a better way, take a look at the below sample code:

When above class get invoked following output will get printed:

Some key points about the above code:

Event in C# is a type of Delegate, which means that if one wants to use Event, then one must define delegate first. Events can have multiple event-handler functions, which have a signature like Delegate, and get called when an Event is raised by some other Event in an application. A simple example is when a button is clicked in the UI. Events are very useful to create notifications.

To understand Events in a better way, take a look at the below sample code:

When above class object is created and then “OnPrintEvent” method invoked following output will get printed:

Some key points in the above code:

Both Event and Delegate do the same task, which is to hold event handlers and call them when delegate or event are invoked. So we have a question: Why do you need Event in a language like C# when one can achieve the same thing with Delegate?

The answer is that Event is a wrapper on the Delegate type.

The Problem With Delegate

Let’s understand this, using the same class defined above which is “DelegateTest”.

The above code performs the following steps:

The Problem with Delegate is that one can easily override Delegate properties, and that leads to error or serious issue. That means one cannot use Delegate as a public property.

The Solution With Event

To avoid the above problem, C# uses Events, which defines wrappers around Delegates. The below code makes use of the EventTest class defined above, and PrintEvent is a wrapper around the Print Delegate.

The above code performs the following steps:

One cannot do this with Event:

So the Event type resolves the problem of exposing Delegates outside of a class by defining wrappers around Delegate. The below image is a representation of Event and Delegate. 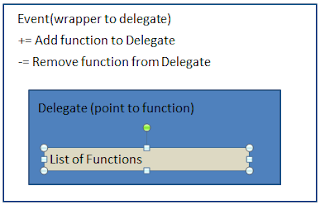 More differences between Event and Delegate are:

Event and Delegate both follow the Observer pattern. The difference between both is that Event wraps Delegate type, and makes Delegate not modifiable in terms of changing references, i.e. assigning a new object is not possible.